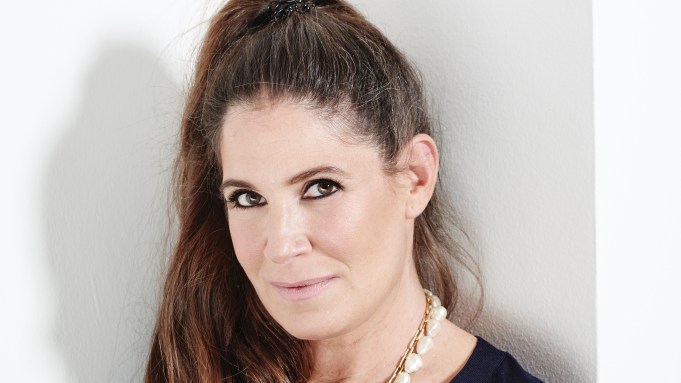 “I always shiver when I see ‘stylist’ next to my name. I know I am one, but I’m never going to be one of those all-time, 100 percent brilliant women or men who have this down to a T,” says Elizabeth Saltzman. “I find myself being a decent editor with OK taste for certain people, whom I treat as humans, not as runway subjects, even though the red carpet is probably the most important runway.”

Saltzman has spent the better part of her 34-year career in fashion cultivating images for print — first as a fashion editor at Vogue, then as fashion director and contributing editor at Vanity Fair. She was part of the Old School Manhattan social scene (her mother, Ellin Saltzman, is a former longtime Glamour editor and fashion director at Saks Fifth Avenue, among other specialty retailers, and her father, the late Renny Saltzman, was an interior designer and modern architecture patron) that believed those who worked “behind the scenes” in fashion should stay that way — unless they were being photographed for the society pages.

Today, Saltzman has shifted gears toward Hollywood, even though she calls London, where she lives with her husband, Tom Walker, and two teenage sons, home. Among the actresses whom she dresses for the red carpet are Gwyneth Paltrow, Uma Thurman, Gemma Arterton and one of this year’s Oscar darlings, Saoirse Ronan. Through her fashion consulting business, Saltzman also styles shows for and advises young designers, which often means connecting them with friends like André Balazs, for whom she enlisted Emilia Wickstead to create uniforms for the Chiltern Firehouse hotel staff. “Clothing and styling for me is a part of the whole equation of my business. It allows me to see what designers are interested in, what they will create, how much they will let you push them, how much they get to push me into something I wasn’t thinking at all,” she says.

Though Saltzman is photogenic and quick with bon mots, you’ll never see her on a reality show or Snapchat. “I feel like publicizing myself is weird. It’s not being modest, it’s being human and having a family — and having grown up looking for attention. But that was before, when there were no selfies and no danger. There were a few cameras around, but no one was out to humiliate you,” she says over dinner at Chateau Marmont, where she’s touched down for two days to style a charity campaign for Paltrow.

So if she’s not playing the typical Hollywood stylist role, how does she cultivate clients?

“Usually it’s timing and if I think I can be helpful — if someone is looking to be taken care of in the sense that they know they can just show up and we will have a quick fitting, and their looks will be set and there’s no chaos. I’m sort of like a fairy godmother. I prefer to choose people where I feel like we can better their fashion grade, meaning it just makes life easier and better and they look good and the fashion world thinks they look OK. It’s a transition from sometimes they get it right, sometimes they get it wrong, to trying to get it mostly right.”

And what does she make of Ronan? “Our relationship is brand new. Can you wait ’til we’re past the hot dating part?” she laughs, adding, “It’s a long-term relationship that’s being started and it’s not about money. [‘Brooklyn’] is a tiny budget film and everyone’s doing it because they love it.” She has bonded quickly with Ronan, who she met prior to the Toronto International Film Festival in September. “She was whimsical, willing to have fun in the sense of one day we’d do a skinny black dress and one day we’d do a big bold print. I choose things that bring out her natural beauty because if you can bring out someone’s natural beauty and not wear Spanx and use all the tricks, then they are going to be more secure on that red carpet if it’s not their natural habitat. If you are really not a veteran and you are up against some of the most beautiful, elegant, talented women, I can’t even imagine what my heart would be doing. So just trying to make her comfortable was a big part of it for me.”

What is it like working with a girl who everyone suddenly wants to dress? “I would love to be the person who bitches about certain brands, which when I called them for TIFF said, ‘Absolutely not’ or ‘We’ll do it for you as a favor, but we’re not interested.’ No fault to the brands — there’s only so many clothes that can go out. But the flip of the nomination suddenly was, ‘Sorry we couldn’t help you out that time, we’d love to work with you.’ I’m just grateful that it wakes up people who should have known if we were working with them that we weren’t looking for charity.

“I think fashionwise, it’s exciting for her, but it’s also not her priority,” Saltzman says. “Her work and her life are her priority. As a matter of fact, all the money deals were turned away.”

While she said it’s nice to work with an actor who isn’t paid by a brand, it’s not any easier or harder to style them.

“This whole thing is a business, and I won’t jeopardize Saoirse for it. However, I do recognize that you want to be helpful to people while giving your clients their best chance at being their best selves. The difference of coming from editorial is you understand it’s a business, but also that you will seek out the new, like at a magazine when you are trying to appease the advertiser. I would make sure everyone had what they needed, but I also really cared about helping the new guy. Ditto working with Saoirse. My personal favorite was putting her in a Duro Olowu dress at Palm Springs [International Film Festival]. He hasn’t gained the respect and notoriety of the outside world but the fashion world adores him.

“It’s exciting to be current when you are so old,” she says. “You are what you want to be. I haven’t figured out how to not sit on the bed with four newspapers, the TV going, my favorite song playing and a bowl of candy.”