ElizaGray: From Ponytails to Handbags

Accessories designer Gita Costa has a bit of an identity problem. 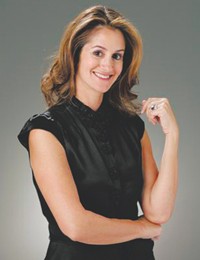 Accessories designer Gita Costa has a bit of an identity problem.

During personal appearances at stores such as Saks Fifth Avenue, she’s often greeted by calls of “Eliza’s here” — so much so that Costa has begun to answer to that name.

Blame the confusion on the success of Costa’s handbag collection, ElizaGray. The name is a combination of a family friend’s name, Elizabeth, and Costa’s son’s name, Grayson.

Costa, who has no formal fashion training, began ElizaGray on a lark four years ago with a collection of ponytail holders that consisted of a elastic attached to a crystal-encrusted metal fob, which has become Costa’s signature.

“Being a young mom, I wear my hair back a lot, and I always wanted something beautiful for my hair,” Costa said.

She introduced the jeweled ponytail holders at a friend’s store in Nantucket and was overwhelmed by the positive response. From there, Costa branched out into handbags, with her hand-designed ornaments as the focus.

ElizaGray handbags, which retail between $300 and $2,000, are mostly wicker, with a smattering of satin, leather, alligator and lizard skins. The color palette is lively: hot pink, gold, silver and turquoise, as well as some white, beige and black. There are about 17 proprietary Swarovski crystal-encrusted ornaments in the shape of shells, flowers, leopards, sea horses and starfish. Costa plans to introduce two new ornaments every season.

Costa said her handbags sold so well at Saks Fifth Avenue in Palm Beach, Fla., in May 2005, that by June the collection was rated the number-one vendor for the entire year.

“We think it’s really suited for the Florida market,” said Elizabeth Kanfer, fashion director of accessories at Saks. “It’s been very strong for us. They’re quirky, but very Palm Beach.”

ElizaGray has expanded to four more Saks stores in Florida, in North Palm, Naples, Sarasota and Fort Meyers. The line, which has grown to include belts and compact mirrors, also is available in more than 60 other stores, including Neiman Marcus in Palm Beach, Takashimaya in New York, Cabana in Santa Monica, Calif., and Eye of the Needle on Nantucket in Massachusetts.

Despite the variety of shapes and designs, Costa maintains one constant: All her clutches have a shoulder strap. “When I go out, I want to have my drink and my ‘pigs in a blanket,'” she said, “so I make my clutches so you can just slip the strap over your shoulder and not have to hold onto it all night.”