Ella Moss is not just about T-shirts. 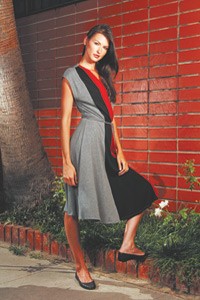 LOS ANGELES — Ella Moss is not just about T-shirts.

The Los Angeles contemporary line, cut from a butter-soft pima cotton-Modal blend, merges comfort dressing with a fashion-forward sensibility that customers are demanding.

“I’ve had women tell me that they’ve worn the same Ella Moss dress for three days straight,” said the brand’s designer, Pamella Protzel. While the example is extreme, soft, colorful knits have become a staple in the contemporary marketplace.

Business at Mo Industries, the Los Angeles parent of Ella Moss and the T-shirt line Splendid, has jumped to $55 million from $5 million during its first five years, industry sources estimated.

Founder and president Moise Emquies credited part of his company’s gains to the California denim boom.

Southern California has been fertile ground for premium T-shirt companies, among them Three Dots, Juicy Couture, James Perse and Michael Stars. Like Juicy, Ella Moss has moved beyond the fashion T-shirt into a fashion collection with signature pieces — scoopneck tops and body-skimming dresses — that are being copied by fast-fashion companies such as H&M and Zara.

The lines sell in 1,000 stores nationwide and in top European retailers such as Collette, Brown’s, Selfridges and Le Bon Marché, as well as in Japan, Australia, New Zealand and Canada. Emquies estimated about 15 percent of company sales come from Europe.

Emquies, a native of Morocco who immigrated to Los Angeles 33 years ago at age 10, made his first T-shirt in 1992 when a friend asked him to help her design one for her store. He was awaiting results of the California bar exam and welcomed the project, although he had no fashion experience. Emquies eventually practiced law, but after a year realized that he preferred apparel. So he founded Mo Industries and a now-defunct sportswear line called Leopold.

“The problem with that line is that it didn’t have a strong identity,” he recalled. “The good thing was that I got an education in fabric and color.”

Enter Protzel, a Los Angeles native who joined the company in 1997 upon graduating from the Fashion Institute of Design and Merchandising. When Emquies decided to close Leopold in 2001, the two created the concept for Ella Moss, which is derived from Protzel and Emquies’ names.

“Moise had found this cotton-Modal-Lycra fabric that no one was using at the time, and we did five T-shirts and 15 woven pieces and shipped our first order to Ron Herman,” she recalled.

At the time, the market was dominated by 100 percent cotton T-shirts by Three Dots and Juicy Ts, but Ella Moss offered a fashion T-shirt with drape, fit and garment-dyed colors.

“Within one day, the T-shirts sold out, and that was when we knew we should focus on knits,” Protzel said. The company dabbled in terry sweatsuits, which became a hit for Juicy, but Protzel kept returning to the knits.

“I realized I was wearing it a lot, and I wanted to wear the T-shirt as a skirt, the skirt as a dress and so on,” she said. “Knit dressing is so easy because it’s washable, it’s wearable, you can dress it up, you can dress it down.”

Soon, the company began adding tonal stripes to its repertoire.

“We had a phenomenon where everywhere you’d look, you’d see that stripe somewhere,” Protzel said. “It’s incredibly flattering, too, because it does validate what we were doing.”

Ella Moss had its coming-out when Sarah Jessica Parker wore the dresses and tops on six episodes of “Sex and the City” in 2003.

The company’s next challenge? How to maintain the momentum.

“As I grow, I think the designs and my sensibility grow, too; it has become more than a fashion basic,” she said.

A year after launching Ella Moss, Emquies developed a one-by-one rib that he fashioned into a basic T-shirt line named Splendid.

“I did it almost as a hobby, because by this time, Pam was designing everything and I wasn’t really involved in the design process,” he said. “We were shocked from day one how quickly it went.”

This year, Emquies launched Splendid men’s and girls’; Ella Moss girls’ and swim will follow in 2007. He would also like to do a home collection. At the moment, a one-off pillow and blanket decorate the couch in his office.

Although most other companies see such growth as a transition into retail, Emquies thinks differently.

“I know retail is a trend now, but I think we sell to great boutiques that do a really good job, so I wouldn’t want to compete with them,” he said. “Maybe, down the line, we’ll open a store somewhere, just to display a complete picture of everything we do, but only for branding or for image, not distribution. I think if you’re a retailer, you’re a retailer, and if you’re a wholesaler, you’re a wholesaler.”

He is resistant to licensing too many products too quickly.

“If you start listening to too many buyers or too many people’s opinions, you get crazy; that’s what happened to me and Leopold,” he said. “But Pam has a good, strong vision of what Ella should look like, and I do the same for Splendid, and we always stay true to it.”