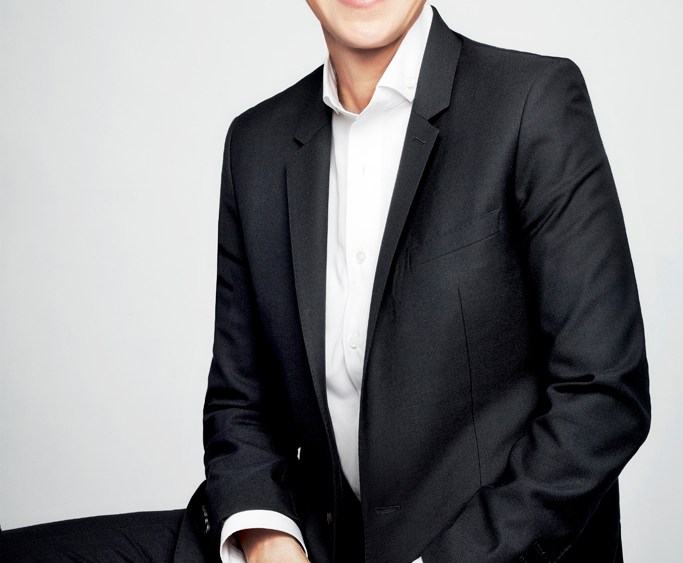 “Love.” The word is embroidered in red script in every jacket, either on the right-side lining or the underside of the lapel in back, visible only when the collar is turned up.

Ellen DeGeneres will tell you she believes in love. And in pragmatic fashion that fuses chic with comfort. And that when it comes to business, the bigger the better.

Each point translates an essential tenant of DeGeneres’ lifestyle brand, ED, which, after an introductory offering of holiday gift items, launches in mid-June with a fuller product range. A teaser site, only informational and with imagery, goes live May 18 at Edbyellen.com with sales opening in mid-June. The specific date is to be determined, as the full site remains under construction. Conversations are under way with a major retail partner and a deal should be in place in time for the fall selling season. In addition, a major event is being planned for New York Fashion Week, with the details still under discussion.

“The whole brand is beyond what I expected,” DeGeneres said. “It’s my brand, but I can kind of brag about it, [because] it’s other people that made this happen and executed it.” Initial product categories include a full women’s line of clothes, two tote styles and a small offering of jewelry; a significant tabletop range, and the GapKids x ED collaboration revealed last week, And there’s more to come — much more, if DeGeneres’ aspirations prove on target.

Product offerings are split just about equally between fashion and home. The major release of more than half the existing product will be followed by “refresher” items every two weeks. Current capability allows for domestic sales only with plans for international expansion in the works. The location of the warehouse in Memphis was chosen for its proximity to a major UPS station, in order to facilitate shipping, including overnight delivery across the continental U.S.

Reflecting DeGeneres’ personal style, the fashion focuses on classic tailoring and sharp attention to detail. “It just doesn’t exist [elsewhere],” DeGeneres contended. “That’s what’s special about it. What makes a shirt different, any sweater different — it’s just all in the detail. Everything about it is casual and yet it’s chic.”

Casual and chic — DeGeneres’ guiding mantra. Inherent therein: the comfort quotient. “This is nothing new to say, but I don’t think you should sacrifice style for comfort,” she noted. “That’s mainly the way I dress. I care about how I look and I care about aesthetic tremendously; I like nice things.”

DeGeneres has always had very specific opinions on her own clothes. For a long time she wore clothes from designers including Dries Van Noten, Thom Browne and Rag & Bone, but more recently had almost all of her clothes custom made, fueling her interest in developing her brand. Once committed to the project, she found that a great deal of knowledge carried over from her personal wardrobe. “I really surprised myself on how much I knew and how many opinions I had,” she said, citing as examples her preference for stretch cotton and wool in suits; where, exactly, a boatneck should fall; determining the perfect length for a jacket or pair of shorts. She’s obsessed with details, especially important when the overall aesthetic is classic. In addition to the unseen “love,” the line features numerous finishings adapted from Savile Row workmanship. Touches include foulard linings, hand-stitched buttonholes; buttons etched with “E” in red and grosgrain tabs on pockets. A tiny lapel pin of a goat comes with every jacket.

“These products are just quality,” DeGeneres said. My concern was if it’s got my name on it, I want to be really proud of it….I have very few things in my closet that I had held on to for eight or 10 years. I’m trying to do something classic that is going to last.”

Each item must not only look good but make sense. A knit dress upcoming for fall was tweaked because DeGeneres found the prototype too short, her objection not about the objectification of women but more about making a marketable dress. “I’m not going to wear a dress because I just don’t feel comfortable in dresses, but if I were to wear a dress it would be that dress,” she said.

“Probably Kim Kardashian is not going to buy my clothes. She might — and then just shorten them….I don’t think anyone [on the team] dis- agreed with me when I said the dress was too short and it wasn’t an objectification issue. It was more practical — when you sit down. I have a lot of actresses on the show. They come out and sit down and say, ‘oh, I didn’t sit down backstage. I didn’t see how short this was going to be.’ The stylists dress them right before they come out. They come down and sit down and they can’t cross their legs. I think it’s important to be able to wear a dress and be comfortable and sit down and not worry about how you sit.”

Inherent in comfort is quality, beginning with materials and extending through to production. DeGeneres pointed out that many of her fabrics come from Italy and Japan. She’s especially pleased with the 10-ply cashmere to be introduced for fall.

According to ED’s managing partner Marisa Gardini, prices fall primarily within the traditional bridge range, with plenty of room for halo product. T-shirts will start at $45 to $75 for hand-printing or other special treatments; spring should top out at about $400. But the fall cashmeres, still unpriced, will be upward of $1,500 and could reach $2,000.

The home collection launches with tabletop, including a set of white artisanal dishes and another, colorful set inspired by Picasso; barware, and soft home throws and pillows.

As for brand expansion, DeGeneres believes firmly that more is more. Back in July, she told WWD she wants to be the biggest brand in the world; to that end she’s eager to jump into a range of categories. Yet she realizes it’s the role of Gardini and the other industry pros involved to impose a careful expansion strategy. According to Gardini, licensing conversations are well underway for socks and bedding. Pet products will be introduced in the fall, done in-house for a season with a licensing deal likely in play at some point in 2016. Men’s could launch as early as fall 2016. Other areas of interest: eyewear, home fragrance and candles, and an expanded accessories range.

Whatever DeGeneres does, she’s serious about showing the love. Going back to the secret signage on the tailored pieces, she explained that its inclu- sion is more than symbolic, citing the 2004 film “What the Bleep Do We Know.” “I don’t know if you’ve seen it,” she said. “They’ve done studies where they’ve written ‘hate’ on water and the molecules in the water have changed. But if you write ‘love’ on the jar that the water is in, the molecules change [differently]. Don’t ask me how or what, but it’s just a reality. There’s power in that word. That may be too esoteric to write in this article…

“I say ‘be kind to one another’ at the end of every show. I think whether someone really is taking it in or not, subliminally, it somehow goes out there. And I think that we put on clothes every single day to express ourselves and I just want people to be able to express themselves in a very stylish yet comfortable and unique way. And whether they know it or not, they’re expressing love.”