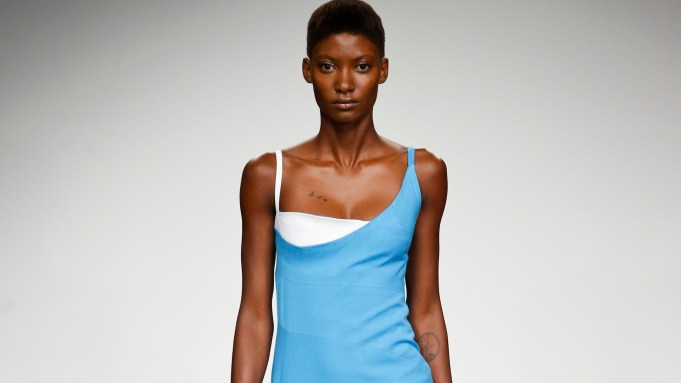 LONDON’S YOUNG GUNS: Looks by emerging designers during London Fashion Week ready-to-wear spring 2018 ranged from the nautical to fairy-tale romance. See what they designers had in mind for their latest collections:

Richard Malone
Searing shades and expressive silhouettes jostled for attention in Richard Malone’s lineup, with the designer saying he’s inspired by “weird contrasts.” He drew on inspirations spanning from Thirties and Forties showgirls’ costumes to rubbish found in the street. A shorts-and-jacket combo had one voluminous, rounded shoulder and was paired with striped blue and white gloves and matching stripey thigh-length boots with cutouts. There was fluidity, too, as in one form-fitting, sleeveless dress crafted from panels of blue and white fabric, with pleated, fluttering skirts.

Roberts-Wood
Designer Katie Roberts-Wood took to London’s Dover Street Market, where she put on a conceptual installation, an interpretation of her Roberts-Wood spring 2018 collection. Vast, sheer panels threaded with silk organza hung from the store’s ceilings, between which Roberts-Wood suspended delicate dresses that resembled bird cages in their construction. Panels of fabric were hand-linked rather than stitched together, she said. The installation made a feature of the technique, which is often hidden on the inside of Roberts-Wood’s rtw garments. “If you buy it…you might see it inside, but it’s not immediately obvious. It’s about layers of discovering things,” she said.

Paula Knorr
German designer Paula Knorr toyed with the conventions of dressing up, splicing together high-octane — and sober — fabrics. A sharp white shirt was worn with a pencil skirt in panels of shimmery red and beige lamé, while a slinky, red lamé dress had its back fashioned in plain black cotton. While the overall effect was experimental, there were still plenty of pieces for the “real woman,” who Knorr said is always an inspiration.

Alistair James
Designers Nicholas Alistair Walsh and David James Wise said they wanted to spread the message of love with their romantic, well-constructed range. “We looked at fairy-tales and the way humans relate to them and how that affects us today,” Wise said. “We wanted to escape all the bad things that are happening in the world.”

Titled “Love Conquered All,” the collection featured asymmetrical ruffles on a floor-length shirtdress with a pussycat bow, and a briar jacquard made with woven metallic details on a flared trousers and jacket. The jacket had heart and star embellishments made with Swarovski crystals and draped chains.

Steventai
Steven Tai brought out his nerdy girl once again. “She is witty with really sharp humor,” Tai said. “She appreciates these colorful things that are reminiscent of her childhood in a way.”

There was a bright orange sailor hoodie worn over a blue stripe oversize shirt and high-waisted navy cinch trousers. A navy boiler suit was festooned with white enamel buttons. A voluminous navy blouse with a white gathered collar was paired with roomy striped trousers. 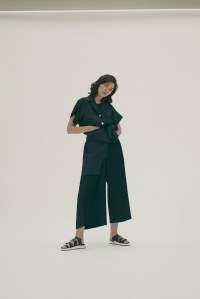 Xiao Li
Xiao Li said her collection was prompted by an urge to “become more invisible. I just feel I don’t want to show off so much,” she said with a shrug on the sidelines of her London presentation.

Cue a collection in cool tones of blue and white — with flashes of pink — which played with diaphanous fabrics. One chiffon skirt was hand-woven into a check pattern — demonstrating Li’s commitment to what she called “slow fashion.” Shirtdresses came in feminine silhouettes with full, A-line skirts.

Her models wore floaty tulle dresses and tops that were layered to combine and intensify the colors. One translucent midi dress was done in Seventies-style chevrons in pink and purple, with the pattern created by layers of tulle.