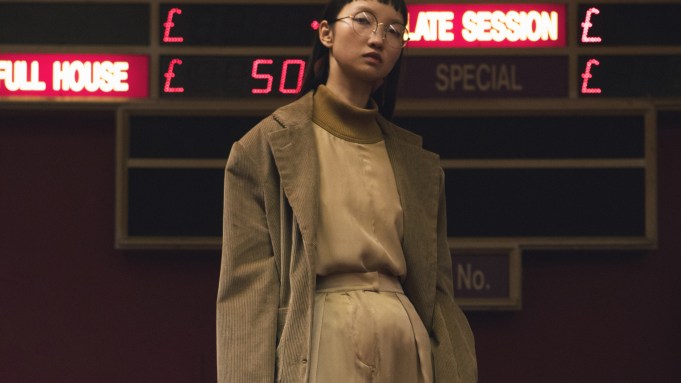 Steventai
Taking a cue from his native Macau, the designer made oversize clothing and played with construction as seen on an enlarged granddad corduroy blazer worn with silky oversize camel trousers and soft rib collar blouse. He balanced rich reds and yellows — the vibrant colors of Macau — with soft pastels that reflect the island’s Portuguese building facades.

Sentaler
This Canadian brand, a favorite of the Duchess of Cambridge and her soon-to-be sister-in-law Meghan Markle, unveiled a luxe fall 2018 collection through private appointments with Bojana Sentaler. The Toronto-based designer said she was inspired by the Seventies, and played with the label’s signature ribbed detailing across an entire coat. Other new styles included a bomber with alpaca sleeves and a navy coat with alpaca on the cuffs and collar.

Roberts|Wood
Katie Roberts-Wood was thinking about the concept of “cuteness” for fall and its association with vulnerability. She wanted to turn that idea on its head with a range of pieces that were both cute and thought-provoking. Delicate silk organza dresses in a palette of sorbet hues had multiple layers of ruffles and origami-like twisted flowers, all of which were created using the designer’s hand-linked technique which eliminates the need for stitching. She also offered up pretty poplin shirtdresses with bow embellishments, loose tailoring and woven shift dresses.

This seamless mash-up of the commercial and the arty has grabbed the attention of stockists including Dover Street Market, Selfridges, Isetan and Galeries Lafayette.

Xu Zhi
For his first on-schedule show, the Chinese-born, London-based designer Xu Zhi delivered a collection filled with standout fabrics and textures that put the spotlight on his signature braiding techniques. Oversize outerwear and midi dresses came in thick braided fabrics decorated with elongated tassels. Inspired by the pre-Raphaelite muse Jane Morris, the designer said he wanted to evoke an air of decadence and mystery in the collection through a muted palette of oranges, blacks and emerald greens and textured fabrics that almost resembled oil paintings. Some of the standout pieces included structured midi dresses and trenches created using a hand-painted coated faux leather fabric.

Alistair James
The British design duo Nicholas Alistair Walsh and David James Wise said they wanted to offer up a celebration of sisterhood, and pay homage to the strength and “celestial connection” of women past, present and future. This translated into some gorgeous Victorian-inspired looks in the form of black ruffle front dresses, and others patterned and solid ones with giant black bows at the neck. A short red dress with large rounded sleeves and a ruffles at the wrists was statement-making, as was a burgundy sleeveless one with a bow. These demure looks hit the spot, and provided a much-needed contrast to racier suit jackets with sheer panels that revealed a little too much of the sisterhood’s flesh.

Sykes
Joanna Sykes is back at London Fashion Week with her own collection, which this season explored the journey from jungle retreat back to the big city, with a mix of fluid and tailored looks. The collection also had an eco-conscious angle with Sykes using soft Japanese vegan leather, Italian regenerated cashmere, organic cotton shirting and bi-stretch Italian crepe made from recycled water bottles. Standouts included her knitted cashmere tracksuits, a zebra print, drop-shouldered maxi coat, and fluid cream tailored suit that was cinched with a thick belt. The latter was definitely more city than jungle, but it still had the signature Sykes laid-back feel.

Richard Malone
The Irish designer Richard Malone has been making waves in sustainable fashion since his graduate collection in 2014 from Central Saint Martins. For fall, he channeled market stall workers from his hometown of Wexler. Key pieces included sweeping coats with sculpted shoulders made using fabrics sourced from female weavers in Southern India, and voluminous trousers made with recycled viscose in prints that ranged from dizzying checks to sturdy stripes. Adwoa Aboah sat in the front row alongside Malone’s 85-year old grandma Nellie, who was the guest of honor.

Xiao Li
For the past few seasons, China-born, London-based designer Xiao Li’s collections have been a reaction against the fast pace of fashion, and for fall she drew on the more relaxed lifestyle of West Coast skateboarders and Seventies Americana. The collection opened and closed with a giant duvet coat, evoking a sense of ease and comfort. Other highlights include supersized fur hoodies, pastel silk separates in quirky prints featuring skater boys and down-filled asymmetrical skirts with oversized bows.

Marta Jakubowski
This season, Marta Jakubowski referenced Whitney Houston’s “I’m Every Woman” video and models of the early Nineties such as Cindy Crawford and Christy Turlington. For the collection, she reimagined power suits in loose silhouettes and created long cashmere coats with strong shoulders, ruffled evening wear and clashing plaids. “It’s my perception of the Nineties and how my mom used to dress,” she said after the show.

Emma Charles
Emma Charles staged a dance presentation in the Ace Hotel. Inspired by Twenties tailoring and the modern dance pioneer Martha Graham, the season centered around soft feminine silhouettes ranging from bias-cut silk dresses to fluid drop waist ones. Soft sheers and fluid silks were juxtaposed with masculine elements found in the collection, such as oversized sheepskin coats and tailoring. Also noteworthy was the subtle clam motif seen throughout – embroidered onto silk dresses and wool suiting – her nod to art deco.

Merchant Archive
“For this collection, I was inspired by “The Paper Dolls” by Julia Donaldson – a book I read to my one-year-old daughter,” said Sophie Merchant. “There’s a blanket on the last page of the book, so the idea came from an old crochet blanket.” There were Aran-style knit stitches within the collection, while the muted hues of a patchwork blanket translated into fluid silhouettes as seen on a slightly oversized knitted cardigan worn over a soft navy corduroy jumpsuit.

Katie Eary
Katie Eary made her official women’s wear debut for fall 2018 with a collection inspired by, and in collaboration with, the Powerpuff Girls, the Cartoon Network’s trio of superheroines. “They were made by their father, Professor Utonium, from sugar and spice and all things nice, but they’ve also got that anger from the ‘Chemical X’ that he accidentally used, and which I can relate to,” said Eary. She imagined the girls at a skate park and threw in a few of her signatures, including Seventies silhouettes and rodeo references for a flamboyant line-up. Eary has finally answered the call to turn her playful men’s wear vision to a women’s collection.

Aadnevik
Kristian Aadnevik, who has a strong red carpet presence among the likes of Kendall Jenner and Kylie Minogue, looked to “Swan Lake” for fall’s inspiration, sending out an ultra-glam collection of evening wear. The theme was taken literally, with swans appearing on lace or printed on silk gowns. There were lots of feathers in the mix, too, which looked nice on a one-shouldered gown. A couple of fur looks looked a bit too try-hard, and one or two hemlines were just plain pornographic. Also, Aadnevik may want to consider upping the pace next season: The models walked at a glacial pace and they made their exits only once the previous girl had done a full lap of the long runway.

A.V. Robertson
“With what’s going in the world, it made me kind of imagine the end of the world,” said Amie Victoria Robertson. It’s almost like judgment day and a showdown of good and evil, almost like a new paradise world being reborn and explored.” Robertson presented a range filled with checks and organza during her first runway show held at St. Andrew Holborn Church. Known for her uniquely embellished women’s wear and accessories, she added shiny gemstone accents to tops, trousers and dresses that were done in a mix of plaid tartans and shiny Lurex.