There were plenty of designer dresses and diamonds galore, even if we could only see most of it from the waist up.

Sure, there were some pj’s and a couple of tracksuits during the at-home preshow and broadcast — but there was also couture and diamonds, even if we could only see most of it from the waist up.

“The world may be terrible, but TV has never been better,” said host Jimmy Kimmel, rallying the cardboard celebrity cutouts in the audience-less Staples Center at the start of the awards.

Despite a more informal Emmys dress code of “come as you are but make an effort,” most of the big luxury players were in the game (Louis Vuitton dressed Reese Witherspoon, Jeremy Pope, Paul Mescal and Yahya Abdul-Mateen), and some smaller ones were, too. (With the “Schitt’s Creek” near sweep, Daniel Levy’s gray flannel Thom Browne skirt suit may have gotten more airtime than anything, as he took award after award during the cast’s Canadian watch party.) 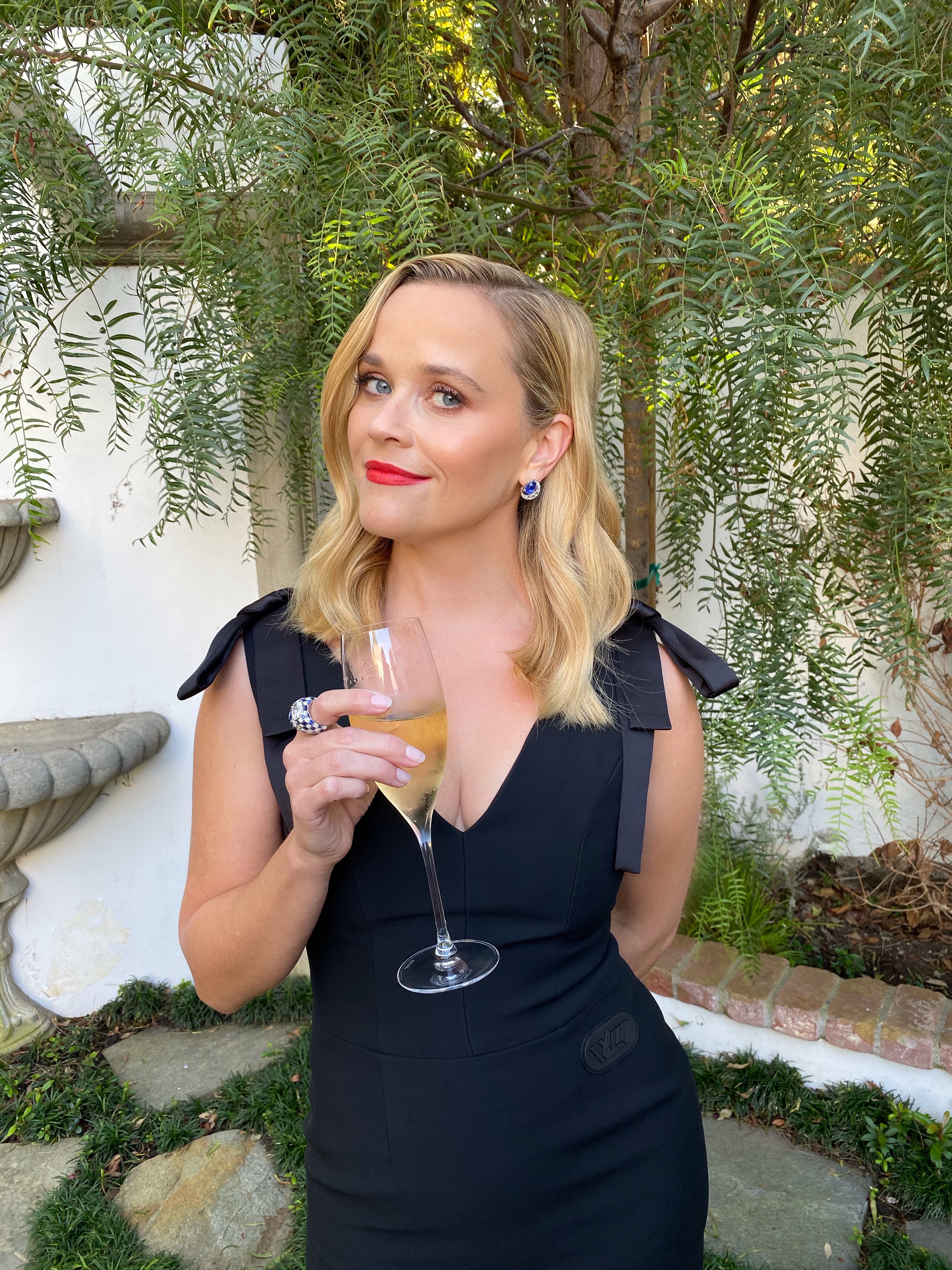 Reese Witherspoon in Louis Vuitton at the 2020 Emmys.  Courtesy

First-time winner Zendaya set the dressed-up tone Sunday afternoon before the ceremony even started, when stylist Law Roach posted a photo of her to his Instagram taking a spin in a glorious, modern-looking Christopher John Rogers black and blue plunge-front, cummerbund dress, jeweled Louboutin heels and colorful Bulgari baubles.

“I think we’ve all been starving for a great dress and a twirl,” Roach told WWD, sharing that he’d had his eye on this particular look, one of the designer’s famed strawberry silhouettes, since it came down the runway at New York Fashion Week in February.

“At the show, I texted Christopher and said you have to hold that dress for Zendaya. He didn’t ask for when or what, but literally was like, ‘Done!'” Because two looks are better than one, Zendaya wore an Armani Privé pearl-encrusted bandeau and pink polka-dot skirt when she accepted her award for best actress in a drama for “Euphoria.” 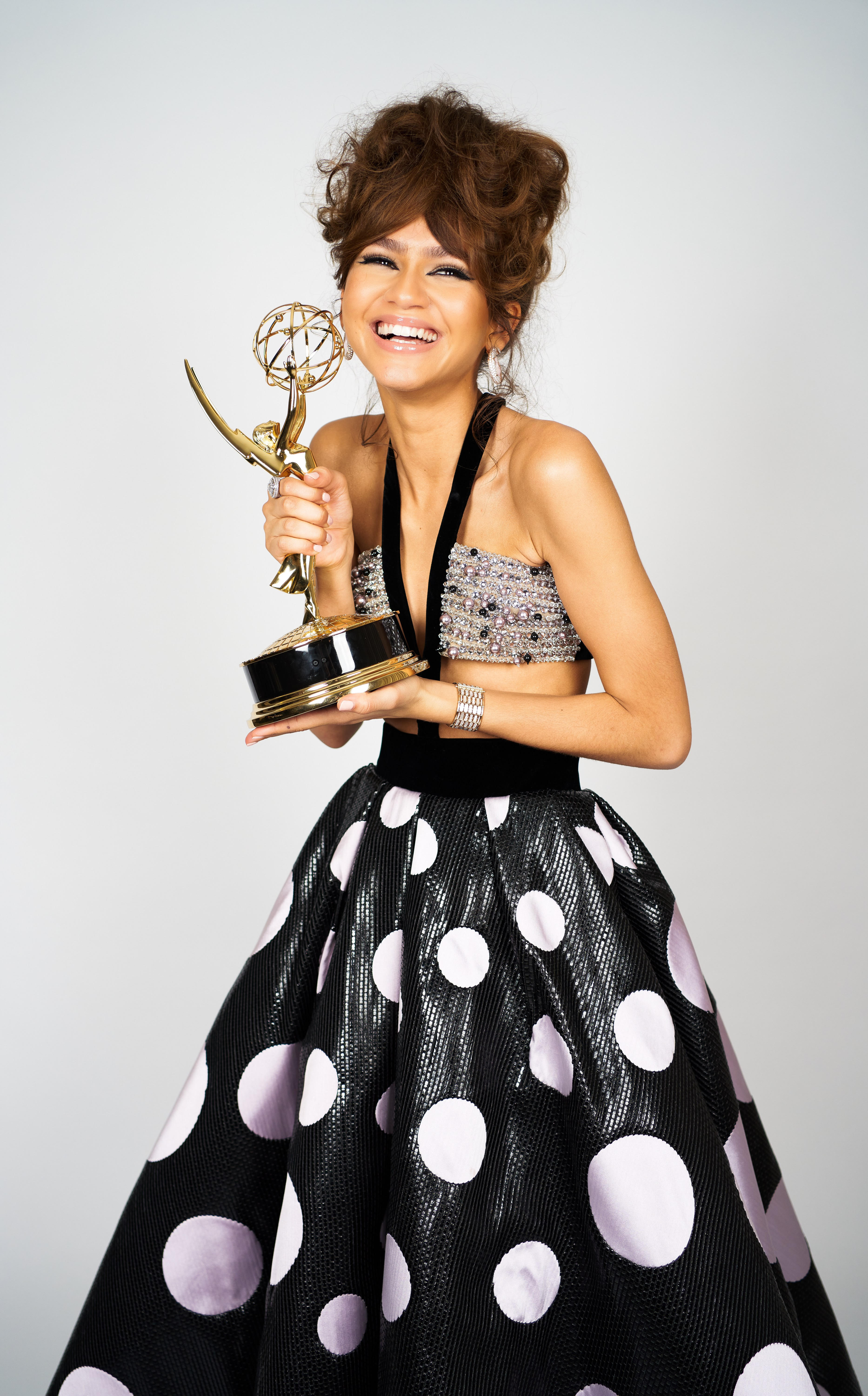 The universe’s dark mood certainly called for some light (and Hollywood has often played that escapist role). There was also a lot to celebrate, with this year’s awards yielding the most Black actor nominees in Emmys’ history. (Actor John Leguizamo did boycott the Emmys, however, citing a lack of Latinx actor nominees, and The Hispanic Caucus also spoke out on the topic.)

And stars seemed to enjoy the excuse to get out of quarantine sweats.

Shira Hass, nominated for “Unorthodox,” was live on the E! preshow at 2 a.m. Tel Aviv time wearing couture, God bless her. “It’s Chanel and I’m in love with it,” she said of the floral-embroidered bustier dress, which took 1,200 hours of work. Cynthia Erivo wore a futuristic looking sparkly purple and neon-green swirl embroidered Versace minidress, her fingers full of Tiffany & Co. rings, and Kerry Washington chose a Dolce & Gabbana animal-print sheath with 45 carats of Chopard emeralds. 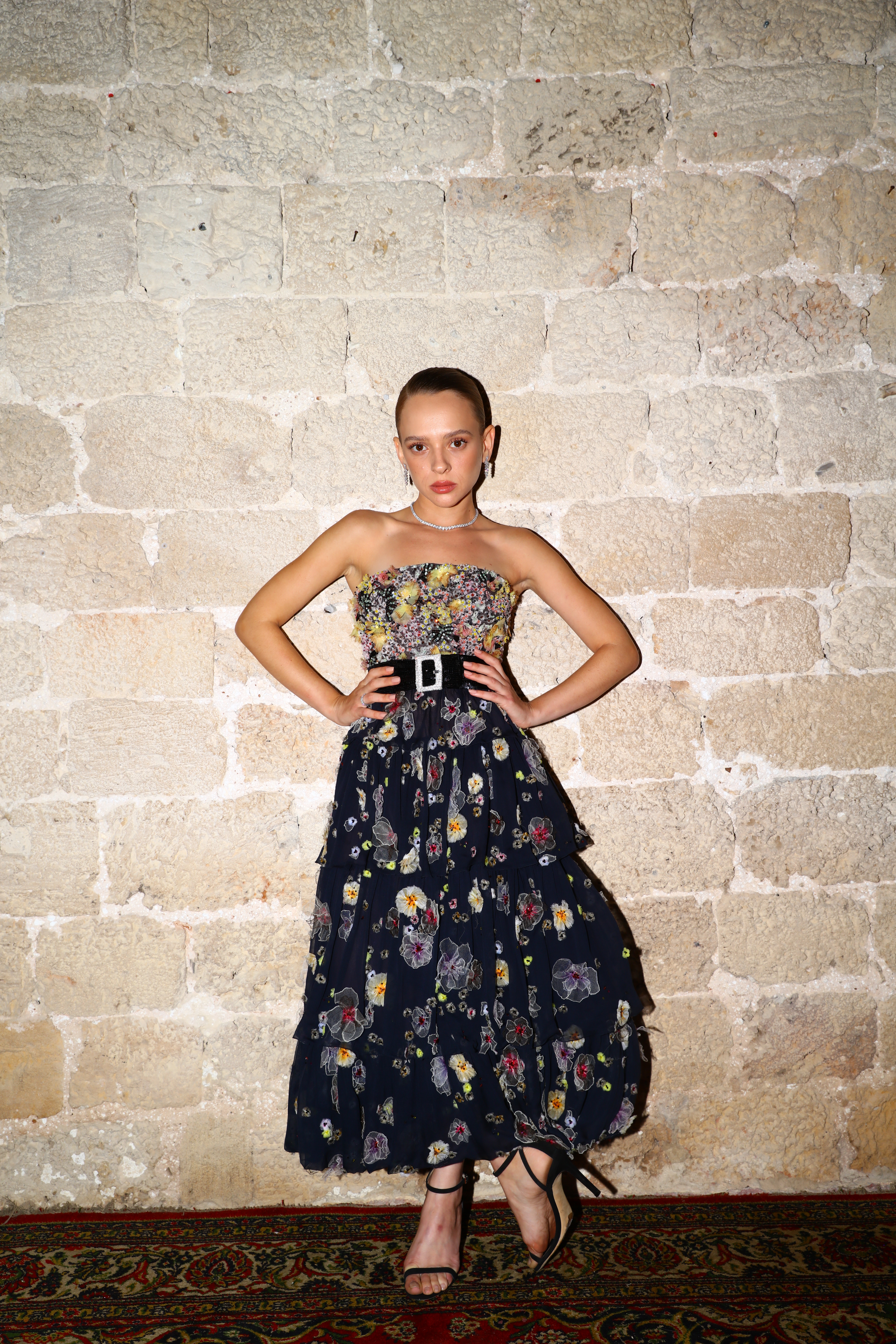 For style-interested viewers, without a true red carpet, there was actually an incentive to sit through the broadcast to see what people were wearing — and to search on Instagram, where most posted their designer credits. (We’ll see what the viewership numbers are; last year’s host-less Emmys were the least watched in history.)

Nominee and presenter Tracee Ellis Ross delivered, setting up her own red carpet in the backyard to model her stunning gold lame ruffled Alexandre Vauthier gown and Tiffany jewelry. “How fun to get dressed up!” she posted.

Others chose to be more muted, but still made it fashion, including the cast of “Schitt’s Creek.” Levy’s Thom Browne skirt suit harked back to the one he rocked in the series wedding scene, while Catherine O’Hara chose a black Valentino sequined turtleneck, corseted dress and combat boots in her character Moira’s favorite black palette. “It’s still the glamour we all love to see, but toned down,” said her stylist Andrew Gelwicks. “It’s the perfect non-red-carpet, red-carpet moment.”

It certainly wasn’t all business as usual, though.

“What’s different is all the COVID-19 testing — I’ve probably had four tests this week — and trying to do everything as socially distant as possible,” stylist Roach said of working under pandemic conditions, which meant the ceremony was filmed live from 114 locations, and trophy presenters arrived wearing tuxedo Hazmat suits.

“It’s inspiring to see so many people get together for a common purpose,” said stylist Elizabeth Stewart, who started Chic- Relief.com during the pandemic to sell designer clothing and accessories to aid frontline workers. “We all recognize that the fun and magic of the red carpet is a great escape, but also that the world is in a place where there needs to be even greater purpose behind what we do.” 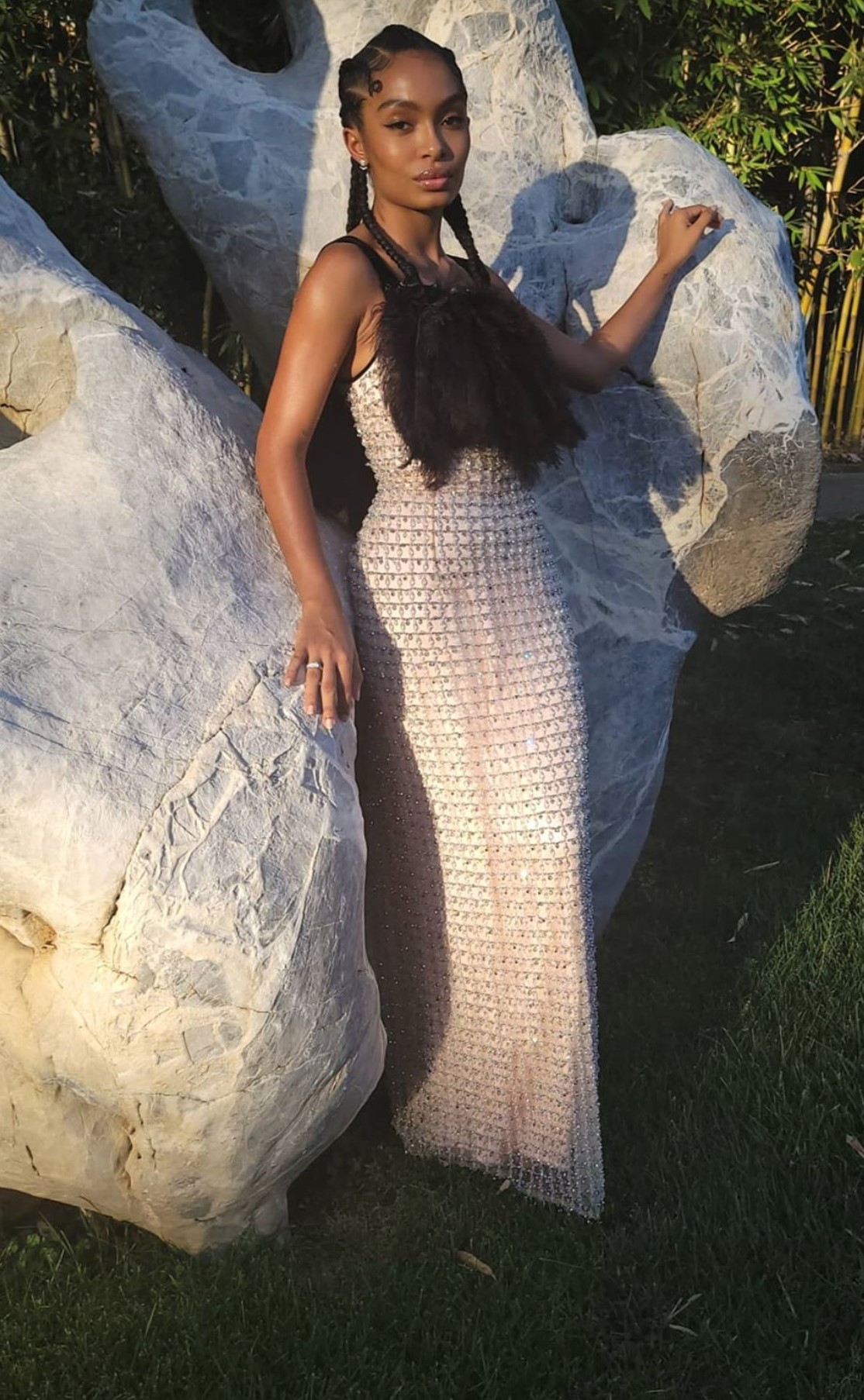 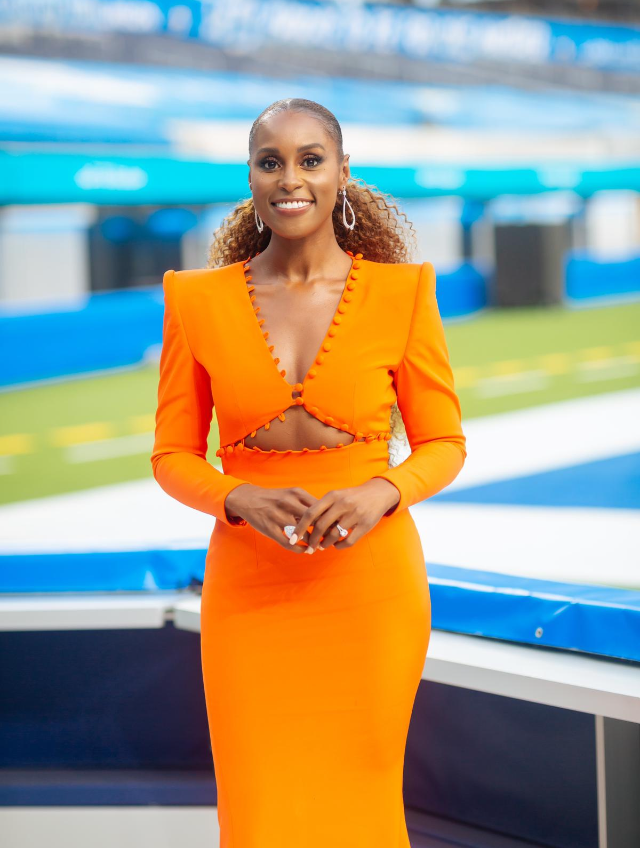 If Emmy was a real girl…. @zendaya wearing @christopherjohnrogers @louboutinworld and @bulgari

No bra? No heels? NO PROBLEM. Wearing PJ’s to the 72nd Emmy awards (from my house) is my kind of vibes. Excited to see if we win any of the 7 awards we have been nominated for!!!! I still did my make up and wore a sequin dressing gown, because… It’s what Tahani would have wanted. And this is her day, not mine. ❤️

Pajamas but make it fashion 🥀✨🥀 Shoutout and massive thanks to some badass New Yorkers for making our #EmmysAtHome dreams come true – @christyrilling for bringing these lewks to life (including the pups) and @lauriesimmons for this gorgeous “dancing poppy” print. Thank you to @retrouvai for these special jewels, @rogervivier for the perfect shoes & @jillandjordan for bringing the whole thing together. But the BEST PART is that these generous designers have agreed to donate our looks to the @radvocacy auction where 100% of the sales will benefit @whenweallvote! Bid for them and other #emmys looks at Chic-Relief.com from September 23 – October 2. And if you’re not already registered, please register to vote tonight!