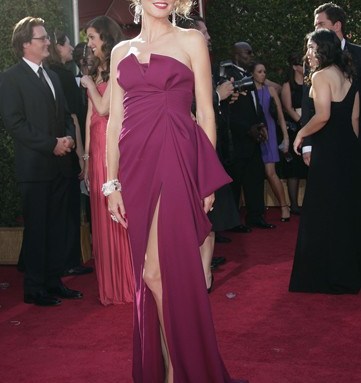 LOS ANGELES — As awards season kicks off with Sunday’s Emmys, homegrown brands with lower profiles or shorter red-carpet track records are angling for the spotlight.

From a stylist’s perspective, the Emmys are a less high-pressure show than the Oscars and the Golden Globes, with fewer paid/prearranged deals.

“I love designers like Sari Gueron and Pamela Rolland,” said stylist Jessica Paster, who works with Marcia Cross and Emmy nominee Christina Applegate. “Getting Dior on a big actress is a no-brainer. Finding an up-and-coming designer like Rodarte and getting it on someone is awesome, and you get a one-of-a-kind look.”

“Typically, the Emmys are a show that stays closer to home,” said fashion publicist Marilyn Heston, referring to American designers. “At the Oscars and the Globes, it is all about the Valentinos and Versaces and Diors, but all these people are preparing for their spring shows. New York and London shows are already done.”

Another advantage for brands is the sheer number of actresses attending the Emmys. There are five actress categories as well as nominated guest stars and presenters.

Stylist Tara Swennen, who last year dressed eight actresses for the Emmys, said a stylist and her client can score big by introducing a new designer. “It can be great…look at what happened when Madonna wore Olivier Theyskens all those years ago,” she said.

However, Swennen acknowledged “there’s always a level of politics in this game” and sometimes she is obligated to dress a client in a particular designer, or make the decision based on which dress is likely to be more photographed. “But I do think it’s about the best dress for the person,” she added.

This year, when dressing “Entourage” star Perry Reeves, Swennen stumbled upon a pair of Jamie Wolf earrings that worked with her bohemian look. “We had pieces from bigger names, but she put these on and it was perfect.” Of course, no word on whether that final decision will stick for Sunday.

For jewelers like Wolf that are not as recognizable as Harry Winston and Cartier, seizing opportunities to get in front of stylists, designers and celebrities is crucial. Janey Lopaty, who was vice president of public relations of Juicy Couture who now has her own business, builds upon previous relationships to place Avakian jewelry on the red carpet. Those connections have paid off recently for the Geneva-based brand, which has had a retail presence in the U.S. for less than a year, but has been worn by Molly Sims, Marcia Cross and Rihanna.

“There are some people that are loyal to a brand and always wear it, but a lot are open to newness,” she said.

Sally Morrison, director of the Diamond Information Center, agreed that the Emmys is a forum for smaller jewelry brands to gain exposure, and singled out Bochic, Erica Courtney, Diamond in the Rough and Lorraine Schwartz as labels that have done so effectively.

“As the competition around the Oscars has gotten more and more intense and those big international brands like a Cartier or a Van Cleef really dominate, a lot of the smaller brands have focused on the earlier award shows like the Emmys,” she said.

The assortment of baubles matters, too. Italian jewelry designer Marco Bicego has been working in more diamond-filled, statement pieces in the last two to three years, and notable names have come calling. Hillary Rodham Clinton wore his three-strand necklace when she spoke at the Democratic National Convention.

But spending money heedlessly to get jewelry on actresses isn’t effective for a small brand, said Anjanette Clisura, president and co-creative director of Diamond in the Rough. She explained that Diamond in the Rough carefully culls through lists of celebrity guests to determine who doesn’t have a contract with a jewelry house and concentrates its energies on them. The strategy was successful last Emmys when Queen Latifah wore the brand.

“It is definitely a little bit challenging because we don’t pay,” Clisura said. “It is getting harder with people getting contracted, but we know there are some people that still aren’t.”