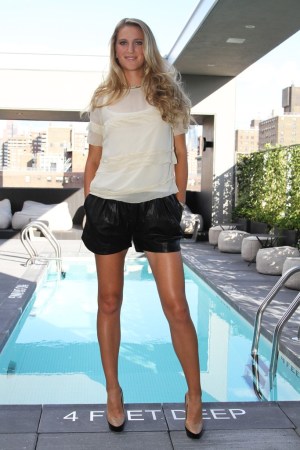 She’s seeded fourth in this year’s U.S. Open but, as of now, Victoria Azarenka might be most famous for these two things: her extremely loud, and often lengthy, shrieks when she hits the ball, and her tendency to retire from matches due to injury or fatigue.

This story first appeared in the August 30, 2011 issue of WWD. Subscribe Today.

Such notoriety really bugs her, and this is what she’d instead like you to know: She has a wicked backhand that’s helped her win seven singles tournaments since she went pro at age 16. She’s currently setting up two still-unnamed charities in her hometown of Minsk, Belarus. She loves music (Beyoncé!) and clothes (Gucci!), and is about to make her first New York Fashion Week runway debut, walking in Samantha Black’s show as part of the Style360 showcase (really nervous!). She’s also dating fellow pro tennis player Sergei Bubka Jr., who is ranked number 210 but she claims she can’t beat him.

“Tennis is my first priority, but I have so many other interests, like I want to study finance at Columbia,” Azarenka says, adding that she’s currently shopping for an apartment in New York, “her favorite city in the world,” to make that transition easier. “I don’t want to finish tennis and then go study. I want to do it now.”

Maybe so, but at a recent WWD photo shoot, just days before the Open starts, Azarenka is focused on one very voluminous, slit-to-there black gown. Atop the roof of the new Hotel Americano in Chelsea, a rack full of spring 2012 clothes has just been rolled out. The grandiose Kaufmanfranco is her favorite, while Tribune Standard’s fringed frock and By Malene Birger’s chiffon top and leather shorts are close runners-up. “I’m a girly girl,” she says. “But sometimes I’m funky and like to look like a hippie, or sometimes I’m classic and really modern.”

As for her U.S. Open uniform by sponsor Nike, it’s black and blue — “very tight on the top and then it sort of comes out into a floral shape on the bottom,” she notes, adding that her “thing” is to accessorize her outfits with fun laces. “My shoes are white and black but my laces will be blue.” (Her signature hair style is three braids that connect into one in the back).

Azarenka, 22, first picked up a racket when she was seven. Her mother was working at a tennis center in Minsk and the young Azarenka would meet her there after school. One day she started hitting balls against the wall and a coach took notice. “He asked me to join the group,” she recalls. “I was shy and said no but then I decided to try it.” It was right around then when Azarenka developed that aforementioned shriek. “It started because I was so weak as a kid and I needed the extra power,” she says. “It becomes part of your breathing and how you move. It’s like when you lift weights — it becomes natural.” When asked if she’s trying to break the habit, she rolls her eyes. “No, I’m not, and I won’t stop it. It’s who I am and it’s part of how I play.”

At 14, Azarenka left her family behind to train in Spain for nine months; she signed on with her first sponsor, Nike, that same year. She then relocated to Scottsdale, Ariz., and after that to Monte Carlo, where she currently lives, as do many other professional tennis players (Novak Djokovic, Robin Soderling, Caroline Wozniacki, Daniela Hantuchova). “There’s a reason,” Azarenka says, referring to the well-known fact that the principality is income tax-free so one cannot be taxed on prize money.

Speaking of, Azarenka’s total career winnings are in the ballpark of $7.7 million. On top of that are her sponsorship earnings from Nike, Head, Power Balance, Sport Protein Plus, Tourna Grip and American Express. She has bought cars for her mother and father (an Opel and a Lexus, respectively) but her older brother, a college student back in Belarus, well, “he needs to buy his own,” she says. “I think it’s important that he has the motivation, and it would be more exciting for him to buy it himself.” Until then, he can always hitch a ride in his sister’s Porsche Cayenne, which the Porsche Tennis Grand Prix tournament gifted her in 2009, just for participating.

As Azarenka gears up for her first-round Open match — today, against Johanna Larsson — one touchy topic must be addressed: all those retirements. She has withdrawn from an unusually high 14 matches in her career, most notably last year’s U.S. Open during which she collapsed on the court while playing in the second round, due to a fall she took warming up. So is she healthy? “Yes. Even though I’m 22, I’m still growing and the doctor says my body is still developing,” she says. “Plus, I didn’t have a good schedule last year. There were a lot of commitments and I couldn’t back out of some things. Right now I feel OK. You can never say you feel perfect because you damage your body every day on the court. But I’m getting more fit and am working on my speed and on my core.”

By now she’s clearly ready to change the subject, so the conversation returns to shopping. When her mom arrives in town later that afternoon, Saks Fifth Avenue will be one of their first stops. Like any 22-year-old with major money to burn, Azarenka is not beyond the thrill of an impulse buy. A crystal tiara was one of her last purchases, “just for fun,” and she’s also a sucker for shoes. “Especially Louboutin and Dior,” she says. “People always tell me I should wear flats because I’m so tall but I’m like, screw them. I love my heels.”