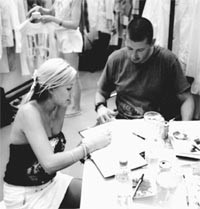 A summer heat wave and uncertain economic climate did nothing to dampen the spirit at the London trade shows last season. “Whatever the general economic situation may have been,” said Sarah Amies, a spokeswoman for Moda UK, “the attitude at Moda was very much business as usual.”

Gary Bott, a spokesman for contemporary casualwear shows For Attention Of and To Be Confirmed, claimed footfall at the two shows actually saw an increase. “Many exhibitors reported their best season yet,” he explained. Based on these experiences, trade show organizers here have reason to believe the forthcoming season will remain strong.

Bott attributes the success of the FAO and TBC trade shows last season to the new proximity of the shows. For the first time, the two shows coincided in date and area, although held at two different venues.

Therefore, next season FAO and TBC will be held even closer together on Feb. 8-9. The shows will also run together at The Truman Brewery in East London’s Brick Lane over two floors, totaling 120,000 square feet.

Organized by Brand Progression, each event will unite approximately a hundred labels each, with FAO continuing to exhibit a tightly edited lineup, including Komodo, French Connection Shoes and Phat Farm, with a selection criteria based upon a brand’s importance in the market, as well as the potential of new upcoming brands. FAO has created a modern image in the market and all creative work for the show is produced by design agency Hingston Studios, whose clients include Harvey Nichols, Christian Dior and the Rolling Stones.

TBC’s lineup will include contemporary labels such as Ugg, Aem’Kei and Oliver Spencer.

For the teen sector of the market, it’s all change. Next season will see The Style Group’s first consumer event, Sistastyle, aimed at harnessing the consumer power of teenage girls — and the spending power of their parents. The group is confident that 30,000 visitors will flock on April 3-5 to the 70,000-square-foot space at the ExCel exhibition hall in London’s Docklands.

Entering its fifth season, Moda UK — the mainstream women’s wear show — will be held at Birmingham’s NEC Exhibition Center Feb. 15-17. Spokeswoman Amies reported an increase in the number of brands in Moda Modern showing season on season and says it’s because of an increasing demand for young, contemporary fashion. “The event is firmly focused on doing business, with no catwalk or visual presentations,” Amies said. “We want exhibitors to be kept busy with taking orders and generating trade.”

Pure Womenswear, organized by Emap Fashion, is a longstanding contender and enters its 15th season next year, with 800 labels showing at West London’s Olympia exhibition from Feb. 15-17. The Pure lineup remains split into six sections: Pure Vision, a range of designers with a focus on creativity and original design, including Kyras, Casch and White; Pure Life, which exhibits unisex lifestyle brands, including Great Plains and Marco Polo; Pure Spirit, with younger labels such as Ben Sherman, Lulu & Red and S’nob; Pure Elan, which shows contemporary brands such as N Peal Cashmere and Nougat; Pure Essentials, a high fashion and casualwear range of labels, and Pure Accessories, showing a lineup including Butler and Wilson and Mikey.

According to event organizers, Pure has proved to be “a sellout with leading brands” and reports a 29 percent increase in the number of visitors at last season’s event, year on year. Approximately 20 percent of the visitors are from overseas, as are 40 percent of the exhibitors. Central to this event are the signature catwalk presentations for each section throughout the day, and the marketing support offered by event guides including the distribution of the Pure magazine prior to the event.