LONDON — Coco Chanel had deep links to London — both romantic and professional — so it was only natural? that Karl Lagerfeld brought his road show to town.

He literally took over the city with Chanel-logoed... 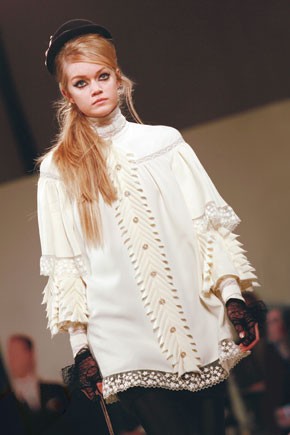 LONDON — Coco Chanel had deep links to London — both romantic and professional — so it was only natural? that Karl Lagerfeld brought his road show to town.

Bringing a blast of Gallic chic and punk energy to the English capital, Lagerfeld staged a blockbuster show of luxury pre-fall ready-to-wear Thursday night. But that’s not all: On Wednesday night he unleashed fleets of Chanel-logoed black cabs to ferry guests to a thumping Nobu dinner, and on Thursday hosted back-to-back after parties — one with an exhibition of his moody black-and-white photos of Versailles.

“Where does he find the time? He should do workshops on time management,” marveled Thandie Newton on Wednesday night as she fought her way through the crowd flooding into Nobu, including Kylie Minogue, Natalie Imbruglia, Rinko Kikuchi, Kate Moss, Tom Ford, Charlotte Casiraghi, Kelly Osborne, Emma Watson, Yasmin Le Bon and Daphne Guinness.

“Of course I came. I love Karl,” said Minogue, who later popped onto a stool to pose for a photo with a very tall friend.

Before the show, held at the new Phillips de Pury & Co. headquarters in London’s Victoria neighborhood, Lily Allen mused on London-versus-Paris style. She said she found the former “more daring, more quirky” and the latter unbeatable for classics. But she was in a celebratory mood over her Grammy nomination.

“I do need to buy myself a congratulations present,” Allen said.

“I like London style,” said Tokyo-based Kikuchi, who plays a sword-wielding character in her next film, a Japanese action feature. “I think it’s very rock.”

“It’s clothes for today, but it’s quite Baroque at the same time…a postmodern version of sophisticated punk for the rich,” Lagerfeld said during fittings on Wednesday, as a model strode by wearing slim black satin jeans with panels streaming from the back pockets “to give some action.”

One of Lagerfeld’s inspirations was British singer Amy Winehouse, who scored six Grammy nominations Thursday, and whom he likened to “a Brigitte Bardot, with black hair.” To wit, all the models sported the singer’s signature messy beehive and heavy eye makeup.

The fashion messages include lean silhouettes, flat shoes and an eccentric mix of delicate ruffles and rough-and-tumble hardware. Knitwear was strong, from piped cardigans and bubble skirts to breeches.

“Postmodern romance,” said Lagerfeld. “The collection is not based so much on shapes as art and craft.” Suits and coats came trimmed in zippers and coats were edged in jewels or dotted with glittering brooches.

The show was the latest métiers d’art collection, launched in 2002 as a way to showcase the skills of the seven couture ateliers that Chanel owns. These include the embroiderer Lesage, the shoemaker Massaro, the feather artisan Lemarié and the silversmith Goossens.

Technical innovations this season include high-heeled shoes with bulbous heels that actually light up — “Batteries included,” Lagerfeld noted —and gloves and neckpieces made from delicate, articulated metal feathers.

Lagerfeld’s favorite piece? His Doorstop bag, a wedge-shaped clutch that can be tucked under the arm and won’t slip out.

London hasn’t seen such a polished and luxurious show for eons: There were endless trays of Champagne, hors d’oeuvres in geometric shapes, candlelit seating and handwritten place-cards. “It’s all very grown-up for London,” said one observer.

Ever the Chanel fan, Emma Watson said it was hard to capture the essence of Karl. “He’s got that je ne sais quoi,” she mused. “And I think this show was terrific for London fashion.”

Another Emma — Thompson, this time — said it was her first fashion show.

“Clearly I have not lived. Someone told me I should have worn black,” said the Oscar-winning actress, who was concerned about her outfit because she was wearing a cream jacket-and-trouser ensemble. Told the show would last about 15 minutes, Thompson said: “That’s just like a film: All the buildup — and then it’s over.”

Chanel, which operates about 10 boutiques in England, including one that just bowed in Manchester, has ties to the country that stretch back almost a century. It all started when Gabrielle Chanel struck up a romance with polo player Arthur “Boy” Capel, who financed her when she set up business in 1910 as a milliner. Chanel was later inspired by another English boyfriend, the Duke of Westminster.

The years 1925 to 1929 represented her most intense English period: She brought Irish tweeds into the Chanel vernacular and into postwar fashion, said Lagerfeld, who has an encyclopedic knowledge of the iconic designer.

“She always had a very good relationship with England, and in those days, English people spoke French,” Lagerfeld noted.

For his part, Lagerfeld confessed admiration for “the hunting look” and a particular affection for the Edwardian period, when parading women were “feathered, gorgeous creatures. I like those periods when the world is on the edge of the end,” he said.

Bruno Pavlovsky, Chanel’s president of fashion, said the métiers d’art collection — initially tested in a handful of stores — is now carried in all 154 Chanel boutiques and select wholesale accounts in the U.S. While it’s evolved into a significant and growing business for Chanel, Pavlovsky stressed the limited quantities of garments, priced in the 10,000 to 15,000 euro range, or $14,600 to $22,000, tap into the upscale customer’s desire for exclusive and exceptional products.

Prices for the collection shown Thursday are still being finalized but run up to 30,000 euros, or $43,900, for a full-length leather coat festooned with jeweled embroideries.

The clothes — plus shoes, accessories and jewelry — start arriving in Chanel boutiques in May, allowing the French brand to offer completely new collections every two months.

“There’s a need or a desire for change and new things all the time,” Lagerfeld said. “You don’t wait six months to go back to the shop. The offer has to change. Shopping is a cultural activity.”

Chanel represents between 30 and 50 percent of the workload for the couture ateliers it owns, and the métiers d’art collection has helped boost demand such that the ateliers have had to hire more than 50 employees, Pavlovsky said.

The executive declined to give figures for Chanel’s U.K. business, but described it as “booming,” bolstered by strong local demand and tourism. “The last two years have been very dynamic,” he said. “It’s quite a well-balanced business.”

For his part, the ever-restless Lagerfeld is brimming with concepts for his next show-on-the-go. “Besides London, my other idea was to go to India, so that will be next time.”