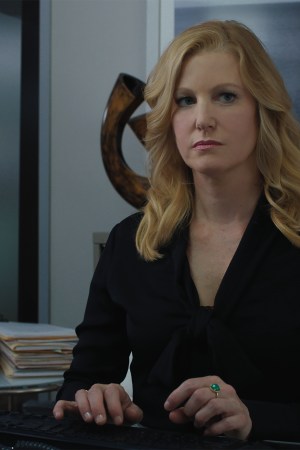 “I sat and had coffee on Wall Street, and just watched the people, at 6 a.m.,” says Teresa Binder-Westby, the costume designer responsible for dressing the cast of the first female-driven Wall Street-centric drama, “Equity.” The film, out Friday, follows “Breaking Bad” star Anna Gunn in the lead role of Naomi Bishop, an investment banker trying to climb her way up in an industry that, in real life, has yet to see a female lead a major bank. For Binder-Westby, the closet of the banking world’s elite was foreign territory — hence the necessity for the sunrise people watching.

In refining the narrative, real women from companies like Goldman Sachs and Barclays were consulted, and the film’s other stars Alysia Reiner and Sarah Megan Thomas met with women on Wall Street for character research. Binder-Westby started there, too. “You see these women, and what they’re wearing is their uniform,” she says. “They’re not waking up and putting outfits together, they’re putting on their uniform and going to work. And so what are those pieces? And as you begin to climb the corporate ladder, what are those pieces?”

Her takeaway was that clothing was highly reflective of one’s standing in the company. “I found that the assistants wore skirts and separates, and when it got into being a banker — if you were the boss — maybe a pantsuit, a skirt suit,” she says. “But you wouldn’t wear that if you were an assistant. You wouldn’t wear a highly printed blouse, and yet maybe as you become the banker you would. It seemed that in the corporate ladder, as you’re assisting someone your personality isn’t with your clothing.”

Her challenge in creating this for the screen was the budget — the film was an independent project. Binder-Westby is from the Philadelphia area, where the film was shot, and scoured local consignment stores for expensive-looking pieces. “We had such a low budget,” she says of her sourcing, “so to provide high-end clothing for Wall Street women was definitely a challenge. I got a really great consignment shop on board, where I knew I could get some great pieces.”

In the end, several adjustments had to be made. “In my mind, I had to find a St. John dress for Naomi,” she says. “I needed the structure, I needed what that says. So it was a fun project in that way, because I had a lot of things that were defining what decisions I could and could not make.”

She used clothing to reflect Naomi’s navigation and ultimate ascension of the moneyed Wall Street ranks. “As she started to follow her heart, I folded in more color,” Binder-Westby explains. “Unfortunately it didn’t translate as well as the director or I had hoped, I think because they edited several of the scenes. But at the end you see her softer side, and she’s in this really cool modern, structured, color-blocked dress, that’s a little more ‘I can be who I am and it’s OK, these are the choices I’m making.’”

Binder-Westby was inspired by shows such as “House of Cards,” which — though not Wall Street — show women in positions of power in historically male-dominated realms. “I wanted it to be strong, and powerful and sophisticated,” she says. “When she’s going to work, the clothes are not what’s important. How she wears the clothes is important, the things that she chooses. It was more to really define the world around her, too, because it has been dominated by men. And to be able to be in that arena.”

Though Binder-Westby’s trips to Philly’s best vintage shops might not be the route for the many St. John-clad Wall Street women, Naomi’s trajectory up the corporate ladder — and how that was indicated through her clothing — all comes back to what she took in on those early mornings watching commuters.“It’s obviously associated with monetary gain but also other things,” she says of the difference in dress, based on job title. “You wouldn’t dare dress with your personality. You can’t out-dress your boss.”