Erdem Moralioglu Gets Behind the Camera for New Matchesfashion Capsule

The designer shot the look book imagery for his summer capsule collection inspired by a Seventies production of “A Midsummer Night’s Dream.”

Erdem Moralioglu shot his first fashion campaign, for Matches, in the garden near his London home.

The designer, who collects contemporary art and photography, and whose fall 2020 collection was inspired by Cecil Beaton’s images, took inspiration from some of his idols. He picked up a camera and shot the look book images for the new summer capsule he’s designed with Matchesfashion.com. It’s his first fashion campaign.

Travel may have been limited — and the usual trappings of a fashion shoot in short supply due to lockdown — but the designer made it work. He photographed the model Maggie Maurer in the garden square across from his house in London.

“There was no hair, no makeup and it was such fun,” said Moralioglu, who isn’t entirely new to photography — he regularly shoots on film backstage at his fashion shows.

It was clear, even before lockdown, that Moralioglu was itching to flex more of his photographic muscle.

“He was given his first camera when he was 12 from his dad, and I was so inspired by this idea of him dressing up his sisters and making his sets out of tin foil and plastic. He was obsessed with these graphic motifs that you can see became the clothes,” Morlaioglu said of Beaton at the time.

The designer said the exhibition also reminded him of when he made his first fashion portfolio, “shooting my sister against the basement wall with the disposable camera, and developing it, and then sending it with my portfolio to the Royal College of Art.”

Meanwhile, the 13-piece summer capsule collection for Matchesfashion was inspired by a Seventies production of “A Midsummer Night’s Dream,” and will be available on the e-tailer’s site from Wednesday. 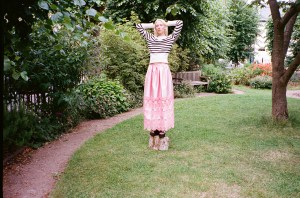 The designer said the collection’s inspiration came from “these beautiful images of Peter Brook’s production of “A Midsummer Night’s Dream,” which was first shown in the Seventies. It was a revolutionary production of the play as it was all about the actors appearing in a giant white box, which allowed the palette of their costumes to appear almost as bright paint strokes on a white canvas,” Moralioglu said.

“The play looked so modern, but also so joyous. I love the idea of having these naive florals and something very romantic contrasted with the bright bold colors such as green saturated embroidered dresses. I wanted something that felt easy, but also dreamy.’’ 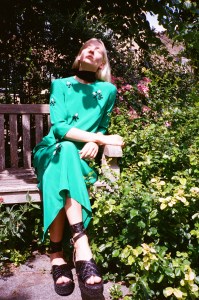 Natalie Kingham, fashion buying director at Matchesfashion, said the collection combines a timeless glamour with modernity, and offers “elegant pieces that can be worn in a contemporary way, a beautiful skirt teamed with a white shirt, or a dress with flat sandals.”

Moralioglu had an eventful time quarantining in London. As reported, he conceived and produced his resort 2021 collection at home, with help from Zoom, and had the images photographed in Epping Forest, on the edges of London.

The designer said that lockdown gave people a stark choice: “You could either freeze and stop, or think about the future — and design a new collection.”