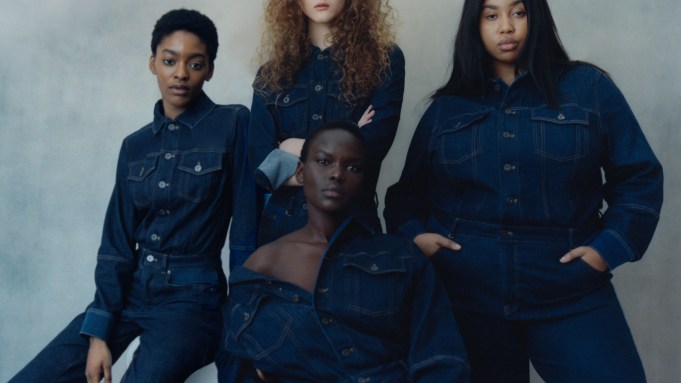 “We’re all huge fans, and I love the fact Erdem launched extended sizing with his own brand, so there’s an earnestness and care there,” said Alexandra Waldman, cofounder and creative director of Universal Standard, which counts Gwyneth Paltrow and Natalie Massenet among its investors.

The designer introduced extended sizing in his own brand for pre-spring. “The idea you only cater to a certain population makes no sense,” he said, noting the demand among bespoke clients for extended sizing has been there for some time. While it’s too early to tell if the change has had an impact on the bottom line, he said he has noticed extended sizes tend to sell first at retail partners such as Matchesfashion and Net-a-porter.

“Collaborations fly the flag for equality, not just for the consumer, but the industry to see. They are a legitimizer that says this is worth doing to be on the right side of history,” said Waldman, who has previously brought Universal Standard together with Rodarte, J. Crew and Goop. “Inclusivity speaks to someone allowing you to join them. This is about equality. I should not have to fall on my knees and thank God for finding a frock that fits me. I should be able to walk into any store I want and buy more than a scented candle. It’s not just for my benefit, but for the benefit of the people selling it.”

No stranger to collaborations himself, Moralioglu teamed with H&M in 2017, and deGournay more recently. Regarding Universal Standard, he said, “I like their approach. It is all about universality and that they are focused on women during the day, and denim particularly, was interesting to me. In my own brand, I do denim in a small way, made-in-Italy, but this was a chance to experiment…And working with customers who are differently abled, learning how things have to open and close, that was educational. For me, with every collaboration, it’s great if there is something I can learn from it as well.”

The teams worked across the Atlantic and across time zones to design and fit the collection via Zoom.

“I wanted to give everything a very human hand, experimenting with different washes and playing with frayed edges, and I loved the idea of creating a piece someone would absorb into their wardrobe and wear it four years, five years, 10 years,” said Moralioglu. Prices range from $128 to $198 and the collection is available at UniversalStandard.com.

“Denim is a huge category for us; jeans are a culturally iconic item, and if you were one of those people told by the fashion industry you couldn’t participate in that, you don’t look good enough, you aren’t part of our team, it becomes white noise reiterating that,” said Waldman, who recently added premium selvedge denim to the mix at Universal Standard. “We want to give access to those special pieces to everyone,” she said, adding, “The right way to do plus size isn’t to do plus size, it’s to make clothes for women. This is not doing a good deed, it’s about being smart in business.”

Examining size prejudice should be part of today’s sociopolitical conversation, she remarked, pointing out that 67 percent of women are a size 14 or over. “This is not just about the fashion industry changing, it’s about a cultural change…a generational shift and [the power] of social media where everyone tells you how they feel about something and you see which way the wind is blowing.”

Indeed, apparel brand Loft made headlines in March for the onslaught of customer backlash it received after revealing it would drop sizes over 18 because of ongoing business challenges.

“Just because they were making bigger sizes doesn’t mean they should be doing great; you have to do right by these sophisticated women who are steeped in the same culture as everyone else,” said Waldman. “The reason we’re seeing this from Loft and Ascena is not a reflection of how badly those products are needed, it’s a reflection of how badly those products were being done and how poorly that customer has been treated. Customers want something better.”