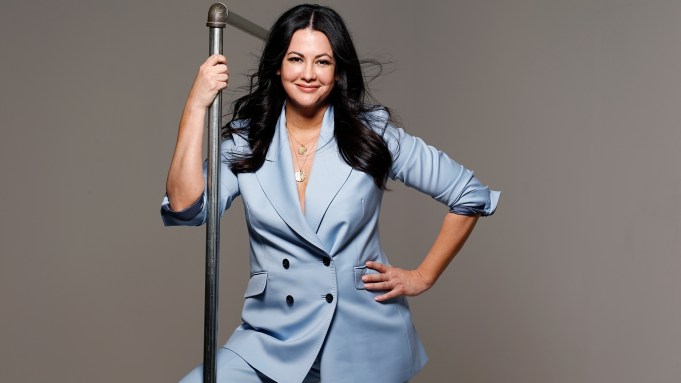 The stylist, who has built a business dressing professional male athletes as well as some female socialites and actresses, isn’t based in the fashion hubs of New York or Los Angeles. Instead, she’s headquartered in Charlotte, N.C.

But what the fashionistas on the right and left coasts may have overlooked is that the Southern city is home to many professional sports teams including the Carolina Panthers of the NFL, the Charlotte Hornets of the NBA, and the NASCAR Hall of Fame.

When Hanks moved there eight years ago with her husband, who is in the commercial real estate business, the mother of three was looking for a way to utilize the skills she had developed working at retail stores and writing for lifestyle blogs and magazines. She quickly realized that Charlotte was “a huge sports hub,” she said, but saw that no one was working with the players to up their fashion game.

So she started networking and offering her services. She “landed a race-car driver for the Kids Choice Awards,” Hanks said, and it was — pardon the pun — off to the races. She now has a roster of around 25 professional sports clients including Panthers players Thomas Davis, Trai Turner, Captain Munnerlyn, Graham Gano and Julius Peppers as well as NASCAR drivers Kevin Harvick, Kyle Larson, Martin Truex Jr., and Clint Bowyer.

Most recently, Hanks scored a contract with Fox Sports, which has a major office in the city, to style its on-air talent.

Ironically, Hanks admits: “I don’t follow sports,” but she does follow fashion. She also has a knack for working with hard-to-fit clients and making sure that they look good regardless of their size. Case in point: Turner is a guard for the Panthers and stands 6 feet, 3 inches and weighs 320 pounds. And he’s developed an affection for Dior Men.

So Hanks has approached the brand to negotiate the creation of a custom runway look for the player.

Working with designer brands is getting easier these days, she said, as they “see the value of athletes as influencers.” What they wear when they arrive at the ballpark has become social media fodder for fans and followers, and brands are quickly realizing the value of the association.

Hanks recently brought Davis (6 feet, 1 inch, 235 pounds) to Dapper Dan’s, a haberdashery in Harlem, N.Y., to create a custom wardrobe for him and his wife. She also worked with Gucci to create bespoke suits for Harvick.

But she doesn’t just work with big guys. Larson is only 5 feet, 6 inches and 135 pounds with a 27-inch waist, so he requires special treatment as well.

Whether big or small, her sports clients all just “want to feel confident,” she said. “Guys today enjoy fashion and want to look good.”

And unlike a lot of celebrities, Hanks’ clients are actually willing to pay for their custom wardrobes. “These guys make millions of dollars a year and they want stuff that fits — and are willing to pay for it,” she said. And that also helps her get her clients in the door for marquee labels. “When I have a guy who’s planning to spend $30,000, they [brands] are willing to work with me,” she said with a smile.

Athletes today realize that they need to present a professional, stylish image for their appearances outside their sports — NASCAR drivers can’t go on Jimmy Kimmel or a red carpet in their racing jumpsuit. So she works with them before their seasons start to see what appearances they plan to make and then sets out to find the right outfits.

“I want to make it as effortless as possible,” she said.

Most of her clients are drawn to high-quality pieces that fit well rather than something ostentatious. And once they find it, they’re loyal to the brand. “It’s not about the flash,” she said, “or what’s trending right now. And if it fits well, they’ll stick with it.”

It’s Hanks’ job to find new brands that might fit the bill. Right now, in addition to the more-established Louis Vuitton, Dior, Hermès and others, she’s drawn to emerging labels such as Daniel Patrick, Palm Angels, Greg Lauren, Amiri and Mr. Smith Paris. For sneakers, she’s especially enamored with Maison Margiela. “I like to introduce them to up-and-coming brands,” she said of her clients.

But she’s careful not to push too far.

“With some guys, you can hit them with as much fashion as you can find,” she said, “but others get overwhelmed and flustered and will never call you again.” To avoid that, she always does her homework by researching a potential client and his public persona and then starts “slow and basic.”

Working with on-air sports anchors requires a different mindset and when she scored the Fox Sports job, Hanks set out immediately to change the “really baggy suits” that most of the analysts had been wearing. So for the upcoming shows, expect to see more slim-fitting suits with modern silhouettes and even some Tom Ford sneakers.

Hanks said her most stylish client is Turner, who “loves fashion,” and is partial to Prada, Fendi and other high-end designer brands. In fact, she fell in love with one Prada coat she got for him and was going to “borrow it,” but it was a 3XL, so she passed.

For her own wardrobe, when working with male clients, she tends to dress more conservatively such as the sky blue Gabriella Hearst pantsuit, plaid Marni coat and white Alexander McQueen sneakers she wore on her latest visit to New York.

Although she doesn’t work with a lot of basketball players, Hanks acknowledges that as a group, they’re the best-dressed athletes, particularly LeBron James and James Harden, who are not afraid to take risks, something she’s quietly nudging her clients to do as well.

“It’s always nice to have a client willing to try things,” she said.