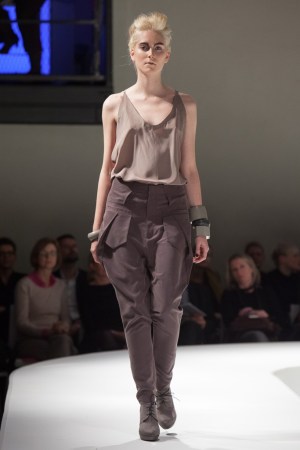 Born and raised in Berlin, Esther Perbandt probably exemplifies who people envision when they think of the city’s edgy, creative scene. Perbandt showed her mostly black collection off-site at the Lavera Showfloor, which offers support for designers using sustainable fabrics and production methods. Always androgynous, her avant-garde tailored reconstructions went a bit more gender-bending this time, with boys in frocks and girls in suits for the strong outing. Crisp collars and slim ties popped up under asymmetrical looks and elongated shirtdresses that were buttoned up without looking stiff. Cropped pants were cuffed at the knee and paired with layered tops and swooping blazers. Maybe it was the models’ coifs, but one could imagine these separates suiting another part-time Berliner, David Bowie, to a tee.