Known for her deconstructed, all-black, avant-garde — and often gender-bending — looks, Esther Perbandt added a touch of white and graphic stripes to her spring collection. 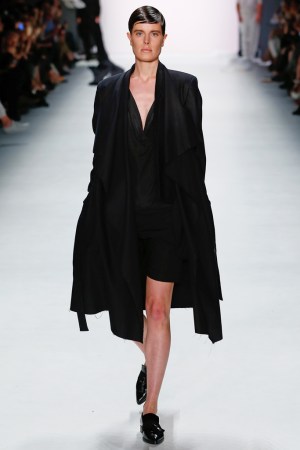 Known for her deconstructed, all-black, avant-garde — and often gender-bending — looks and ties to Berlin’s lively art scene, Esther Perbandt delivered on both counts for spring 2016. Music from Sven Helbig and strange but beautiful performances by a soprano clad in black and countertenor in white gave hints of what would come.

There were carefully de- and re-constructed black suiting separates for men and women and softer trenches with unfinished hems. Basket-woven strips gave texture to cropped vests, cut higher in the back. Shirt dresses had layered hems, formal jumpsuit shorts sported trompe-l’oeil lapels. The lights went down, and it started again, this time in white and cream, giving a fresh and summery feel to the sometimes hard-edged shapes.

White faded to black, and then it was time for the final round: a series of black-and-white and black-and-gray stripes — wide and bleached-out on denim or felted across crisp organdy. The evening of “three shows in one” ended on a high note as Perbandt, who fronted her own band for a fashion event a year ago, came out to sing in the closing moments.