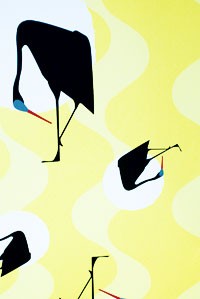 NEW YORK — The sophisticated and the whimsical had equal footing at last week’s pair of summer 2005 textile design shows: Directions and Printsource, both held at the Hotel Pennsylvania here.

The shows featured fresh offerings such as African-inspired motifs, as well as spring trends that included scenics inspired by the Prada runway, Fifties’ sketchy florals and sophisticated conversationals.

At Group Four, which exhibited at Directions, the operative word in ethnic prints was primitive.

“The look is softer and a bit cleaner than in the past,” said Vittoria Di Rosa, an artist agent for Group Four.

“This season, the ethnics are not as literal as before,” said Ali Matthews, sales executive at Keelergordon. “The look is made more contemporary by adding unusually bright colors.”

Other looks included a return to glam and hippie styles. At Westcott Design at Directions, owner Peter Westcott described them as “sassy…embroideries in deep, bright colors that include strong greens, cobalt blues, neon-y yellows and shocking pinks.”

At Brewster, showing at Printsource, vibrant tones were used on a variety of large-scale paisley embroideries. “They are absolutely Seventies-inspired,” said Nancy Harris, head of women’s wear sales.

Some studios, however, went the softer route when it came to ethnic looks. At Directions’ Milkprint, for instance, the feel was more vintage and worn-in, with faded tones and blurred images.

Ombré prints and tie-dyed looks were also included among the ethnically inspired. At Tom Cody, which exhibited at both shows, brightly colored sequins were embroidered on equally colorful tie-dye grounds, giving a costume-y feel.

At Printsource, Mint showed more Americana-styled versions, while Directions’ Whiston & Wright did well with its selection of retro-inspired tropical scenics. Some studios combined their scenics with a variety of decorated accents. At Printsource’s Baxter Fawcett, a photographic scenic was framed with floral embellishments. Marilyn Kern and The Colorfield, both at Directions, featured a variety of motifs — from sketchy street scenes to ones combined with florals.

“They continue to be strong since the spring season,” said Paul Harding, sales director at The Colorfield.

For Irene Vlak, director of print and textiles at The Limited, it was the softer hue of many of the florals that was key. “It’s just better for our customers than the brighter tones I saw at the spring shows,” Vlak said.

“They’re a bit more hip, not as cutesy,” said Tweedie.

Many studios mixed conversationals with florals, while others such as 280, a new exhibitor at Printsource, went for a cleaner, more graphic look. At The Works, also at Printsource, a neutrally colored embroidered beach conversational featured chiffon appliquéd on some of the scenes for a shot of color.

Daniel Sager, also at Printsource, showed beach conversationals with a crafty look that featured appliqué and embroidery techniques on neutral bases with brighter accents. In terms of color, pink was still dominant. However, in place of the softer hues that have been so prevalent, the tones were hotter and brighter. Steven Leavitt, design director at Evan-Picone, a division of Jones Apparel Group, called them “Bollywood” pinks.

Also key were a range of greens, from mint to kelly, as well as many with blue casts.