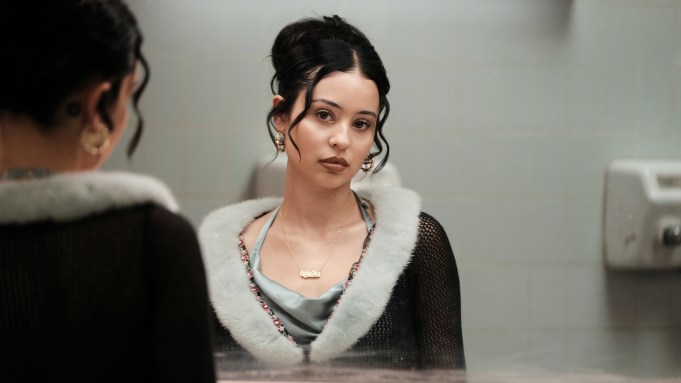 HBO’s teen drama “Euphoria” is one of the few TV shows that resonates just as much for its storyline as it does for its fashion, with the series’ first season influencing fashion trends with its over-the-top looks, nostalgic pieces and affinity for bright colors.

“Euphoria” — which stars Zendaya, Hunter Schafer, Sydney Sweeney, Alexa Demie and others as high schoolers navigating love, friendship, drugs and their identities — debuted its second season earlier this month after over a two-year hiatus due to the pandemic.

The show’s second season is staying true to the striking fashion moments fans have come to expect from the show, but taking it up a notch and leaning more into fantasy by heavily incorporating high-fashion brands that the average teenager wouldn’t necessarily have access to.

“It’s all about having fun with it and not overthinking it and just having free reign of expression, more than the first season, which was still really establishing who these characters are,” said costume designer Heidi Bivens, a former WWD staffer who worked on both seasons of “Euphoria.” “The first season, it was my intention to keep it feeling grounded enough that it felt like these characters could really wear the clothes, whereas the second season verges more into fantasy. I wasn’t intent on keeping all of the brands cheap enough that all of these characters could afford them. I threw that out and just let myself have free reign for whatever and anything that we wanted to put on the screen.”

For “Euphoria” season two, Bivens continued her strategy of curating the show’s costumes with a mix of vintage pieces with nostalgic references and more modern pieces by current designers. She explained that her inspiration comes from everyday people that she sees on the street or on Instagram and sourced many of the costumes from stores in the Los Angeles area.

Although “Euphoria” season two was impacted by the pandemic — the season was scheduled to begin filming in mid-March 2020 and was delayed a year — Bivens explained that she and her team already had most of the costumes picked out and didn’t change much once production resumed.

“COVID didn’t really effect any of the creative decisions or the time that we had off,” Bivens said. “It’s quite surprising just that things do move so fast in fashion and there’s always this question when deciding on costumes if they’re going to feel relevant in X amount of time. So the question did occur to me, which is that year that passed — like are these decision still the right ones? I instinctively thought yes and we stuck to it and so far so good.”

Like the first season, the show’s costumes continue to serve as another storytelling medium, reflecting each character’s journey and their personal struggles. While the first season’s costumes focused more on brightly colored pieces, the second season goes a bit darker to reflect heavier themes.

This is seen most prominently with Schafer’s character Jules, who after her “Euphoria” bridge episode that was released last January, is exploring her femininity and sexual identity. So far in the second season, Jules has seemingly abandoned the pastel colors, mini skirts and other feminine pieces for a darker wardrobe.

For example, the character attended the New Year’s Eve party in the first episode wearing a more grunge-inspired look that consisted of a beaded top by NIHL, a mesh leotard by Maroske Peech and corset-like skirt by Orseund Iris paired with choker necklaces when she confronts Rue (played by Zendaya).

“She’s not wearing as many cute little skirts,” Bivens said about the character. “There’s more pants and more gender fluidity there. It’s not overly femme all the time. She’s still exploring and figuring out how to be comfortable in her own skin and asking herself questions about her sexuality on a regular basis. I think there’s an ongoing inner dialogue for Jules, so hopefully the costumes reflect that in some way.”

Demie’s character Maddy also conveys her storyline through her costumes. Bivens explained that the character has gone “darker, more mature and more vamp” following her breakup from her abusive boyfriend Nate (played by Jacob Elordi) and that her fashion reflects her desire to leave behind her high school life.

This is reflected in the opening scene in this season’s second episode where the character is babysitting for a wealthy woman played by Minka Kelly who has a closet full of unique vintage pieces. During the scene, Maddy puts on her own fashion show, trying on pieces like a 1991 Thierry Mugler Kessler dress, a 1997 camelia print Chanel shirt dress, a metallic Halston caftan dress and a gold sequined Dior gown, all sourced from Aralda Vintage in Los Angeles.

“[Maddy] feels very stuck after the whole Nate experience and it’s just been an intense year from the first season,” Bivens said about the scene. “She is inspired by Minka Kelly’s character who is the woman of the house and is projecting this idea that that could be her because she sees Minka as having this handsome husband and they have money and a kid and she seems happy.”

Bivens also explained that the “Euphoria” cast members are often involved in the costume curation process, sending her inspiration and collaborating on some looks. For instance, the costume designer and Demie worked together on Maddy’s New Year’s Eve look — a cut-out black dress custom made by Los Angeles-based brand Akna.

“Alexa Demie will always moodboard for me,” she explained. “She’s great at that and she enjoys doing that for herself. I invited her to go fabric shopping with me because I wanted her to sign off on whatever fabric we chose [for the New Year’s Eve dress]. That’s always great when you have a cast member who is willing to be that involved and they have great instincts.”

Sweeney’s character Cassie is another that has her identity crisis portrayed through her clothes. Bivens explained Cassie’s inclination for ultra-feminine dresses, skirts and bright colors reflects her desire to be wanted.

“[Her style] is extremely feminine in a traditional idea of what femininity is,” she said. “I think that feels safe for her. She feels attractive in that mode. So much of her costumes from the second season have to do with grasping for Nate’s attention, but Nate represents something bigger for her. It’s about wanting to be loved. We all want to be loved, right? That’s her way of expressing that. Her idea of being loved is that she needs to be attractive.”

Unlike the other characters with their flashier fashion, Zendaya’s Rue was known in the first season for sticking with her burgundy hoodie, which was revealed in the season one finale to have belonged to her late father.

Bivens explained that the symbolism of the garment is explored more in the second season as the character continues her journey with drug addiction.

“When she got out of rehab in the first season she was wearing it a lot and it was like a security blanket,” Bivens said. “I think we’re entering new territory for Rue. I haven’t said this before and it’s sort of occurring to me now that there could be this idea that she’s so conflicted with who she is when she’s sober versus who she is when she’s using drugs that there’s a certain amount of shame involved with her using that I think in wearing the hoodie at this point could be a reminder to her of that because of the relationship with her father.”

Overall, Bivens’ goal with the “Euphoria” costumes is to help drive the narrative while still feeling fresh and fun.

“It’s just about trying to take every opportunity to tell a story through the clothes,” she concluded. “So thinking about what is the emotional landscape? What are we trying to accomplish here? It’s just this constant process of asking yourself questions that are going to hopefully lead you to the right decision.”

Click through the above gallery to see more fashion moments from “Euphoria” season two.