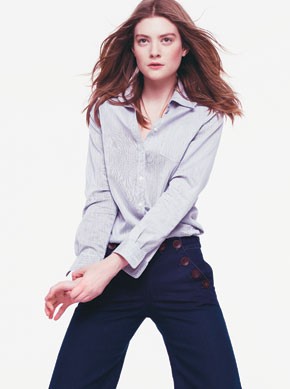 LONDON — European denim brands are looking to move beyond jeans.

Whether it’s prompted by an urge to expand their design vision or an effort to diversify in the hopes of fueling sales in an uncertain economy, many of Europe’s leading brands are introducing ready-to-wear pieces into their collections.

While some companies are adding a smattering of nondenim pieces such as jersey tops or cotton shirts to complement their core, others are offering clothing items that deliberately contrast with their denim pieces.

One such brand is Acne Jeans, the Stockholm-based denim and rtw label. Alongside the label’s signature jeans styles, such as the cropped Hep and the skinny-leg Hex, its women’s collection for fall includes strapless cocktail dresses with ruffled silk skirts and a beige leather bolero jacket inspired by the first female bullfighter, Juanita Cruz.

“When we started, we didn’t like to categorize ourselves,” said Jonny Johansson, creative director at Acne. “We thought, how do we shop? We crisscross between different [categories]. We didn’t see any boundaries. We wanted to be on our own island where you can do what you want.”

Johansson admits that when the company started 10 years ago, it was difficult to convince retailers to treat Acne as both a rtw and a denim brand.

“At the start, it was not so easy,” said Johansson. “We [realized] the business part would take longer, but from the start we wanted to build a brand, think long-term and invest in ideas.”

Johansson said the brand’s sales are now split almost equally between rtw and denim. Acne’s rtw retails for up to 470 pounds, or more than $910 at current exchange, for a leather jacket, and jeans retail for around 180 pounds, or $350. Continuing its impulse-driven approach to design, Acne will launch Miniature, replicas of its rtw collection and jeans for children, and will develop a jeans collection for Lanvin.

One fan of the label today is Brix Smith-Start, who owns the rtw and denim boutique Start in East London.

“They buck the trend,” said Smith-Start, contrasting Acne with other denim brands whose forays into rtw weren’t so successful. “I think that their brand’s whole ethos and lifestyle are so strong…they carry their ethos through [to their rtw].”

However, Lonsdale added the pieces she has introduced are “all designed to be worn with jeans.”

“We don’t sell shirts and ready-to-wear on its own,” she said. “I’m not aiming to make huge amounts of money [from rtw]. It’s been an organic thing….I wanted to create a story.”

MiH’s rtw is priced up to 150 pounds, or about $291, for a cotton smock dress, and for fall they have a worn-in, Seventies feel to complement the high-waisted, flared denim jeans in the collection.

Suzy Radcliffe has added jersey tops and slouchy jersey cardigans to her denim line. For fall, Radcliffe will launch a raincoat designed in collaboration with the 158-year-old British Wellington boot company Hunter that is made from rubberized cotton. The raincoat will launch at London’s Dover Street Market in August and will retail for 425 pounds, or $824. Radcliffe said her rtw is designed to enhance the brand’s denim range.

“I think about what a woman’s going to wear with her jeans,” said Radcliffe. “I have great clarity about what’s Radcliffe and what’s not Radcliffe. I tend to be drawn toward quite traditional fabrics, and I was really fascinated and captivated by [Hunter’s] British heritage.”

Radcliffe said since designing jeans places such a demand on the precision of the garment’s fit, it means denim brands are in a good position to enter other categories in which fit is paramount.

“[With denim] you have to obsess about fit, it’s really demanding,” she said. “Apart from a bra, denim is one of the hardest of any fabrics to [make] fit right.”

Lesley Torson, one of the owners of Trilogy, a London denim boutique, agreed that “if a [denim] brand is known for its great fit and it carries that through into women’s wear…people are really open to that.”

Torson singled out James Jeans’ dresses as pieces that sell “really well” at both her Chelsea and newly launched Marylebone stores, alongside New York-based Raven Denim’s tailored collection of shirts, trousers and jackets and Paige Premium Denim’s new rtw line, Paige Black Label. Torson said those collections are appealing because “the ready-to-wear is a natural extension of the brand.” Torson also said it seemed to work better for denim brands when they didn’t try and force themselves into a rtw fashion cycle.

“It’s priced up there with Balenciaga and I don’t think people will pay that for a little top,” said Thornton. “Sass & Bide were trailblazers with low-waisted denim, but the [rtw] designs are not quite the same.”

Thornton said customers in her boutique wanted to pick and choose how they shopped, and didn’t necessarily expect one denim brand to provide them with every product category.

“I don’t want to confuse the customer by [carrying] a couple of dresses….I want them to know they’re in the right place for denim, if they just want jeans,” she said.

However, Lucy Pinter, one of the co-founders of the London denim label Superfine, which has added pieces such as wool coats, knits and a leather jacket for fall, said showing customers a more complete vision of the brand had a positive effect on its denim sales.

“We did a starchy, wide-leg city jean, which didn’t read so well folded up,” Pinter said. “But when it was hung among other pieces, it looked like more of a couture piece. It made sense. It’s helped people to understand the label better.”

Pinter, who will introduce bags to Superfine’s collection for spring, in addition to the sunglasses and hat collection with Philip Treacy that are already part of the line, said she hopes the brand will eventually see its sales split equally between denim and rtw.

“The brand will always be associated very strongly with denim, but I think like a stylist,” said Pinter, referring to her career before starting Superfine in 2004. “I think of a girl — for spring it’s a rock ‘n’ roll, hippie girl — and base everything on her. So in some way the label is [already] part of the fashion cycle.”