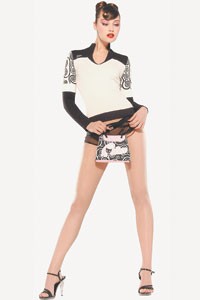 PARIS – Ask a young woman, “What are you wearing?” these days and you might get some surprising answers: “My Ass,” “Acne,” “Naughty,” “Pussy Deluxe” or even “Little Slut.”

Those are among the eyebrow-raising labels coming out of Europe, with most benefiting from their irreverent monikers, but some causing a retail ruckus.

“When my agent had some invitations printed in Paris, she got a series of panic-stricken calls asking if she knew what the name meant,” Helgesen recalled.

Ultimately, the designer decided to censor herself in order to wholesale her line to upscale department store Le Bon Marché. Next spring, the store will stock the collection with the label reading “La Petite S*****.”

“I’ve had to grin and bear it, otherwise [business] is not going to happen in the major stores in Paris,” said Helgesen, adding that American clients such as Barneys New York and Nordstrom have never questioned the name. “At least the label still adheres to my humor, as it looks all the more controversial with the added stars.”

Michael Hadida, director of marketing for Tranoi, the young designer trade show in Paris, defends the growing number of collections with controversial names, saying it not only reflects designers’ freedom of expression, but can bring additional cachet.

“Today, we don’t take things at first value,” he said. “If a brand is called Criminal and designs prison dungarees, it would be too obvious. But if the product is distinguished, the name’s going to bring it a new dimension.”

“Cheeky names are great as long as they don’t offend anyone,” agreed Olivia Richardson, buying manager for women’s wear at Liberty in London. But while Richardson looks to the quality of the product over its moniker, she is generally wary of provocative labels.

“My experience is that labels with ‘in your face’ names usually don’t satisfy in terms of quality,” said Richardson, adding that if a name were to put her off buying a label personally, it would probably put her off buying it for the store.

For example, the store draws the line at names such as Spanish clubwear brand De Puta Madre 69. Translated literally as My Whore Mother – but also a slang Spanish expression used to describe something that’s great – the controversial brand was founded by two Colombian drug pushers doing time in a Spanish prison. Its T-shirts are printed with words such as “drug,” “dead” and “cocaine.” “It’s very trendy with young people, as they love the fact that the words De Puta Madre sound like swear words,” said Robyn Dejong, manager of the Men at Work boutique in Amsterdam. The T-shirts’ provocative words and flashy colors are also a big hit, according to Dejong.

Swedish denim and sportswear brand Acne, meanwhile, belongs to a generation of niche firms, such as newcomers Cheap Monday, who are asserting an irreverent, artsy philosophy over marketing norms. That the name – actually an acronym for Ambition to Create Novel Expressions – also refers to an unsightly skin condition underlines the founders’ message to the fashion industry: Lighten up.

“When you’re working in a creative field, sometimes you can be blocked by boundaries, so it’s nice to remove the seriousness of fashion,” said Acne creative director Jonny Johansson. Retail prejudice is also far from the minds of Acne’s creative team, who distribute to stores in which they themselves would like to shop. These include Colette in Paris; Louis in Antwerp, Belgium; Andreas Murkudis in Berlin; Jeffrey in New York, and NK in Stockholm.

“The name came out of a momentary sensation of boredom, really, with a message for people to let their hair down,” said James Wally, designer for cheeky denim brand My Ass. Wally said it makes creative sense to play off a “joke” name against a serious product. “We felt confident choosing such a name because we felt sure that the product would not be snubbed,” he said.

Like Acne, My Ass pursued a select distribution strategy, targeting stores that get the brand concept. Most of these outlets are in Japan, the Netherlands and the U.K. And, as for shocking the more conservative retailers out there, the brand’s message is clear: “[The name’s] a challenge,” Wally said. “It’s a hello to our friends, and to our enemies, f— you!”