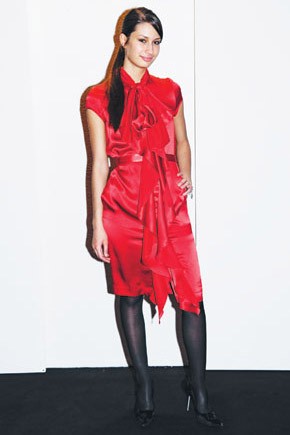 MILAN — A weak dollar and yen gave a stronger European accent to women’s ready-to-wear and accessories trade fairs Touch, Neozone, Cloudnine and White. The four exhibitions, which ran in Milan Feb. 21 to 24, showed only slight downturns in attendance but notable increases in visitors from Eurozone countries.

“The weak dollar hurts,” said Rita Jones, at the fairs for the first time to source knits for her Cincinnati shop and online site, Isle of Skye Cashmere. “But we’re still looking for beautiful items with that special something. Our customers will pay for quality and something a little bit different — Italians do that without veering into weird.”

Buyers were down 4 percent from last September’s edition to 6,100 for Touch, Neozone and Cloudnine, organized by Pitti Immagine. Foreign visitors decreased from over one-fifth of the total last fall to 18 percent, but European buyers represented five out of the top seven countries attending.

Meanwhile, at White, organizer Massimiliano Bizzi said vendors were stable at 200 and foreign buyers rose 24 percent, particularly from Spain and Greece. Americans and Japanese still frequent the Milan fairs, he noted, but they buy using “even more discretion” due to current exchange rates.

Vendors weren’t about to give up on the dollar just yet, though.

At Paris designer Michel Harcourt’s stand, a sales assistant emphasized to onlookers in English that “prices were good.” Silk was available at many booths, but the hand-painted shifts and satin dresses with prominent bows here were especially striking.

Harcourt managing director Jean-Yves Martin explained that the strong euro led the firm to draw up a second price list for the U.S. in dollars, reflecting prices lower than what they would be converted from the euro. That meant a smaller margin for Harcourt, but the strategy worked, drawing American retailers like Searle in New York, which placed orders for items including satin blouses with oversize bows and double crepe knee-length black dresses.

At Pino Covino, soap bubbles floating into the corridor attracted perusal of the “.it” Collection of supple white leather jackets in skinny silhouettes that can be washed by hand.

“Leather is often seen as too high-maintenance, so this is a plus,” said Clorinda Covino, chief executive of the family-run Italian business. “Many Middle Eastern countries don’t have specialized dry cleaners, so buying leather that you can wash at home makes the difference between selling and not selling.”

If loose shapes were staples at many stands, the look was carried to an extreme at Lemuria, an Umbria-based line. A model stood outside the booth intent on morphing ample viscose knits — looks ranged from scoopneck chemise to Empire-waist top — by tying and untying sleeves and shifting the neckline.

Lemuria designer Susanna Gioia concocted a collection of 12 “transformer” tops, paired with oversize cashmere sweaters, which were picked up by stores in Greece, the United Arab Emirates, Japan and Sweden. Her clothes are currently carried in Tomorrowland and Baycrew’s in Tokyo, Podium in Moscow and In The Woods in Seoul. The 28-year-old Italian designer, who has a degree in communications, sells each piece with a how-to DVD and broadcast her freshman 2007 collection on YouTube.

For the first time, White muscled its way into the congested and oft-contested Milano Moda Donna show calendar by hosting five runway shows on nearby Via Valenza for cutting-edge international talent.

As part of the nonprofit White Club project, designers were paired with Italian manufacturers. Standouts included Norwegian Kristian Aadnevik, who lived up to his reputation as Donatella Versace’s protégé by showing all-out feminine looks with a Gothic flair, and Iceland native Steinunn Sigurd, who paired satin metallics with tightly flounced knits for her Steinunn label.

Bizzi, who was promoting the shows to buyers at the fair, said, “This is about an injection of new life into an established calendar and about expanding in the neighborhood to make the Tortona area Milan’s fashion district.”

Other exhibitors at White included the first eco-friendly clothing lines to come out of the fair’s sustainable showcase, CLASS, launched a year ago.

For one, called Monecouture, designer Daniela Barba had just about a month to make an environmentally friendly collection after sourcing vendors from White’s September edition.

“I wanted to make clothes every woman would want,” she said. “It’s about timeless, beautiful things that are also sustainable — not the beige, hippie-type stuff associated with ecology.”

CLASS organizer Giusy Bettoni said that while she considers Monecouture and smaller, eco-friendly collections on show by Lola Parker and Marvie steps in the right direction, there’s still much to be done.

“We’re maybe 10 or 15 percent down a very long road,” Bettoni said. “The important thing is to get information to designers, companies and the public about what sustainable means, and then it can become mainstream. If only three people use or buy it, we won’t exactly be changing the world.”

Two new “sustainability showrooms” set to open doors this spring, one in Milan and one in New York, will help get the word out.

Across the street at Touch, Neozone and Cloudnine, where open stands encouraged browsing and DJs spun lounge music, some vendors hoped to attract markets with strong buying power.

First-time Touch vendor Solleciti, which has been making fur coats since 1945, showed curly goat and fringe-trimmed ponchos in aquamarine fading to black alongside more traditional chinchilla and mink coats.

“There isn’t much market for fur in the U.S., we haven’t had interest there,” said worldwide sales director Tiziana Terenzoni. The Emilia Romagna-based company did garner interest from France, Russia and South Korea, however.

Even less fur-heavy items, like bomber jackets made from pleated silk scarves with mink collars and cuffs, were a tough sell for the American market, she conceded, with a retail price, thanks to the current exchange rate, of about $2,000.

As in past editions, buyers without strong currencies stocked up on Italian style through accessories.

Among orders placed by Kiyomi Tshuhara, a buyer for Tokyo’s Par Avion store, were velvet hats from Florentine haberdasher Grevi and oversize leather bags from Tranquility. In the three years he has attended these fairs, a stronger euro has made his job increasingly difficult, he said.

Still, many vendors hoped to break into the U.S. market. Handbag designer Fabiana Rosati, showing for the second time at Neozone, said she has accepted the fact that her bags are considered “high-end, expensive and definitely a niche,” something that penalizes sales in the U.S., where customers would rather buy a known label.

She added that the setting of Neozone and the caliber of buyers keep her coming back. Rosati’s fall 2008 looks included large patent carryalls in molten brown with bright orange silk linings and woven bags with vintage jewel clasps.

Her thoughts were echoed by Paula Noschese, marketing director for Brazilian shoe designer Francesca Giobbi. For Noschese, the American market remains a “gold standard” for brands.

Giobbi’s creations currently retail in Harvey Nichols Riyadh, Etoile Dubai and five Tokyo stores. Even though the current exchange rate for this footwear brand’s eclectic mix of suede, patent and reptile with sculptured heels drives prices up to $600, Noschese said: “We’re still working on getting there, it’s not a market we’re prepared to give up on just yet.”