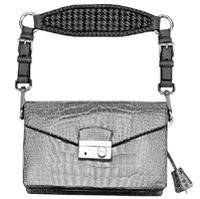 Tough economic times are stretching shoppers’ budgets more than ever, but Europe’s accessories players are on a mission to woo women into at least one splurge this season on a key item like that must-have bag.

Whether it’s leaders like Gucci and Prada tightening their grasp of the market, storied fashion houses like Armani and Versace growing their comparatively small accessories businesses, or emerging designers like DSquared and Vanessa Bruno launching their own lines, everybody seems bent on creating the next bag so hot it will convince even the most hesitant spender to dig a little deeper in her pockets.

Italian exports of handbags, luggage and small leather goods dropped 10 percent in the January to November period of last year to $1.8 billion, according to data from industry organization AIMPES. Dollar figures are converted from the euro at current exchange rates.

With disheartening numbers like that, designers have their work cut out for them.

Paola Durante, an analyst with Merrill Lynch in Milan, said that based on data from listed companies in the sector, leather goods appear to be outperforming other product categories such as watches, jewelry and apparel. Quality, service and proper price positioning are essential, she said.

“My impression is that…the brand will count more and more and that we will see a natural selection that is normal in a difficult environment,” she said.

On the upside, tentative consumers could actually bode well for at least one Italian company. Furla president and ceo Giovanna Furlanetto said her brand, which has lower price points than those of many designer accessories businesses, is well placed to take advantage of customers’ growing attention to the price-quality ratio.

Prices in the U.S. market range from $150 to $550. Furlanetto said the accessories market at this point is “rather stagnant” given the state of world affairs, but her company has seen some bright points, with sales in Asia and Italy, the brand’s biggest market, rising about 20 percent since the beginning of the year. In 2001, Furla posted sales of $90 million.

“We are looking at the future with a lot of optimism,” she said, adding that Furla plans to open a flagship on the corner of Madison Avenue and 57th Street in New York in September.

Industry powerhouse Prada, which derived about 38 percent of its $1.66 billion in 2002 revenue from its Prada and Miu Miu branded accessories businesses, said orders for those items in the fall collection are up about 20 percent on the year. Prada is betting that it can win over the most fickle fashionistas with handbags that feature interchangeable leather handles. Purchased separately, the buckled handles can alter the look of the bag without breaking the bank.

That said, it doesn’t come cheap — one high-end number in green crocodile retails for $5,765.

“If you’re tired of the bag, you can give it a new twist just by changing the handle,” said a Prada spokesman, adding that “attention to detail” is a key component in creating a must-have bag.

Another market leader, Gucci, is also keeping a keen eye on details. Leather goods are the single biggest product category at its main Gucci division, with sales in 2002 at $792.4 million.

Gucci declined to release figures on its order book for fall, but a spokesman noted that a bestseller would be an edgy studded bag with a chain strap. Another cylindrical case with bamboo detailing that sold well in the spring is also returning next season.

Tod’s is also targeting growth for its namesake collection and younger Hogan brand.The company was mum on the state of orders, but said sales this fall should be swift for its two Hogan models, the Bijoux, a soft, rectangular bag in suede, and the biker bag in leather, which features detailing like knotted handles and exterior zippered compartments.

LVMH Moët Hennessy Louis Vuitton-controlled Fendi said sales of its fall accessories are currently up 18 percent. The company said it has seen a lot of success with the newest versions of the Biga, a slouchy, asymmetric shoulder bag that is especially popular in bronze python.

“It’s a positive result,” said a spokeswoman. “Certainly the war could bring repercussions. A lot depends on how long it lasts.”

There’s plenty of buzz on the accessories front in France, as well. New accessories remain a driving force at Louis Vuitton and the pace of introductions will accelerate in 2003. Handbags and small leather goods in multicolored versions of the famous LV monogram, a collaboration between creative director Marc Jacobs and Japanese artist Takashi Murakami, are slated to arrive in stores next month and winter-appropriate versions of the monogram, with a black background, should arrive in stores this June.

Among fashion-driven bags for fall showcased on the runway recently in Paris were structured bags combining tweed and vinyl monogram, and round shapes in red patent leather. Also, Vuitton is putting a new emphasis on accessories in exotic leather like alligator and supple goat skin. Analysts estimate the Vuitton business to be around $2.9 billion, with most of it coming from leather goods.

Longchamp, the 55-year-old Paris house, has obtained bragging rights few of its rivals can match. It has sold more than a million of its signature nylon Pliage bags, which it introduced a decade ago, last year alone.

“We’ve sold more than 4.5 million Pliage bags since it was introduced,” said Jean Cassegrain, managing director of the family-owned and operated firm which over the last three years has doubled its sales to some $157 million. The bag retails for about $100 in Europe. The house revamps and tweaks its looks with new colors every season. But its quiet, almost timeless design, has become a perennial hit with shoppers from Tokyo to New York.

Meanwhile, plenty of fashion houses that generate most of their sales through clothing, such as Giorgio Armani, Versace and Dolce & Gabbana, are building their accessories businesses.

Armani said back in 2000 that it was placing a new emphasis on accessories. Moves like beefing up the design team, buying shoe factories and opening the group’s first freestanding Giorgio Armani accessories boutique in Milan in 2001 have grown sales of those items to make up 24 percent of the group’s total revenue, which came to $1.39 billion in 2002. Key looks for fall include exotic skins such as crocodile and ostrich, but Armani said its signature bag of the season is a small black-and-white tote in satin and leather costing $906 at retail.

“We are confident we will be well placed to capitalize on the upturn in the economic cycle which can be expected within the next 12 to 18 months,” said an Armani spokeswoman.

Versace said it is too early to give an indication of accessories orders for next season, but the business is steadily growing, thanks to recently implemented strategies like more focused price positioning and improved distribution and communication. Sales of accessories, including increasing revenue streams from watches and eyewear, make up 30 percent of Versace’s turnover for its top line. The best-selling bag of the season is a crescent-shaped biker carryall with external zipper compartments.

Dolce & Gabbana is also trying to diversify its product offering. In late February, the company opened its first store dedicated entirely to accessories on Milan’s Via Della Spiga.

“It’s a slice of our product offering that we are focusing on,” a spokeswoman said. Wholesale revenue for the brand and the younger line D&G for the 12 months ended March 31, 2002 totaled $589 million, with footwear and leather accessories accounting for 6 percent.

Europe is also home to a host of emerging players launching their own accessories businesses. These up-and-comers vary wildly from a luxurious cashmere firm Loro Piana to hip sportswear label DSquared.

Storied knitwear group Loro Piana launched its first bag collection in spring 2002, selling the bags at its own network of stores. The line is crafted from luxurious and unusual materials such as Norwegian leather and a unique cotton and linen blend.

Loro Piana won’t release sales figures, but the company is clearly targeting a niche market with a price range of $775 to $2,775. The bags, highly coveted by Italian fashion editors, bow at Bergdorf Goodman and top Neiman Marcus locations with the fall collection.

DSquared, designed by Canadian brothers Dan and Dean Caten, launched its first women’s collection this past season and is now bolstering its nascent accessories business to diversify its product offering and edgy, casual vibe. Suede totes with riveted handles are seen as potential top sellers.

“Given the track record of our men’s collection, accessories will be an important part of our business,” said Katie Liu, vice president of sales and merchandising for Staff International, DSquared’s licensee.

In France, a handful of smaller houses has mimicked the success of the big luxury brands by introducing their own signature bags. Vanessa Bruno, for example, has sold countless thousands of her so-called sequined shopping bag. The shiny sac retails for between $80 and $200 and has limited-edition runs. The designer introduced the bag in 1998 when she opened her first shop in Paris.

“It took a couple of years for it to take off, but it’s been a huge success,” said Bruno. “The idea wasn’t to come up with a classic. I wanted a simple bag, though, that was suited for the way I lived.”