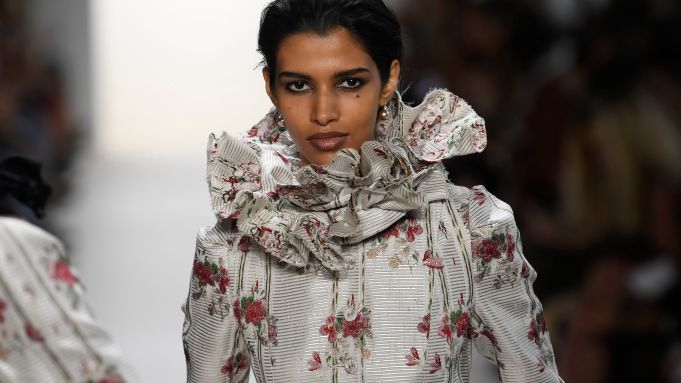 The rose, one of nature’s great paradoxes — exquisite in its physical beauty and fragrance, whether hearty and bold or apparently delicate, yet dangerous and ever ready to draw blood.

That dichotomy has made roses a source of fascination throughout history. Countless cultures and religions have celebrated the glorious bloom, spinning tales around its creation and imbuing it with all kinds of meaning, the most constant, as a symbol of passion, love, eternity. Yet the rose has always had a rueful side to which creatives have long been drawn — painters, poets, playwrights and more drawn to its mystery, moodiness and in-full-view decay. Among those variously smitten: Yeats, Tennessee Williams, Robert Mapplethorpe and Mike Fleiss — the genius who created “The Bachelor.”

Fashion, too, has long romanced the rose. While that thought of rose-bedecked clothes might, at first, conjure images of sartorial schmaltz, the reality is in fact as varied as the flower types itself with designers, like other artistic types, often focusing on the bloom’s moodier incarnations. Such was the case with fall, a season in which roses bloomed everywhere, including on the runways of some of fashion’s most provocative and powerful creators. Miuccia Prada, Valentino’s Pierpaolo Piccioli, Antonio Marras and Dries Van Noten all made roses a center point of their collections. Meanwhile, Ralph Lauren, Marc Jacobs, Giorgio Armani and Alexander McQueen’s Sarah Burton integrated the flowers more sparingly, but to powerful effect. Countless others invoked roses, too.

That the season’s interpretations veered toward complicated renderings may be a statement on our times, about seeking out beauty in dissonance and danger. Prada spoke directly to that point. “It’s a sort of will,” she said, “a need to narrate the good and the bad together, which kind of corresponds with our times.”

Prada titled her collection “Anatomy of Romance.” She noted that “two forces that are present are the [worries] and the danger and, on the other [side], the romance, which is the more positive, optimistic and idealistic part.” She represented the latter with the flowers, some sculpted from the same satin as the body of the dress, some exaggerated 3-D appliqués on mannish fabrics. Yet she said she saw such opposition not as typical Prada-esque contradiction, “at least [not] in my head, but an invitation to unify these different aspects…the good and the bad, the strong and the weak, all aspects that are present in the humanity of people.”

At Valentino, Piccioli also went for high-intensity juxtaposition. He collaborated with Undercover’s Jun Takahashi, who came up with illustrations that combined classically inspired, embracing lovers with bold pop roses for a modernist Goth look without losing the sophisticated romance of Piccioli’s designs. “I didn’t want to go [with] a very classic image,” Piccioli said. “I want romance for modern times, poetry for modern times. I wanted to open Valentino…I want Valentino really inclusive today.”

Van Noten, too, insisted that each of his blooms be “had to be a flower for now,” and therefore, far from perfect. He had little trouble grounding his collection in the here-and-now, looking no further than his own garden, where, on a Saturday afternoon to stroll, a photographer photographed all sorts of blooms, seeking “the beauty but also the imperfection…” Van Noten said. “We went for roses that had black spots and mildew and all these things. The rose at first view they look pretty, but they hide all these things.” The goal “to make it strange and interesting is really easy, but [it must] also have the desirability.”

Some designers played with scale, some with manipulations of palette. Lauren worked an exploded watery print in black and white for an aura of elegant sobriety without turning maudlin. Burton went both outsized and small to highlight the power of femininity, the former with an abundant red gown draped into elaborated swirls to resemble a rose; the latter, an austere leather dress with small rosette cutouts. Armani rendered dark sophistication via his focus on navy and black, while Brock Collection’s Kristopher Brock and Laura Vassar achieved a wistful charm with traditional, muted wallpaper patterns. Conversely, some designers found dissonance in wild oppositions. Case in point: Richard Quinn, who tied up a vibrant floral trapeze bubble with a big bow and put it over a black latex catsuit.

Speaking of fabric mixes, Marras is a master of the genre, as well as of integrations of light and dark, airiness and weight, joy and foreboding. His exquisite, Modigliani-inspired collection featured roses on dusty dance dresses, faux-frump schoolmarm sweaters, and new, inventive versions of his signature tailoring that infuses exquisite craft with proletarian grit. For him, the rose isn’t a short-term fling.

“Rose is a state of mind. It is the beauty in charge…a fundamental decoration for the soul powered by poetry and melancholy,” Marras said via e-mail. “Nothing is more touching and perfect than a rose; it looks like it was painted with the heart. It is really heartbreaking.”

It is also his continuing design signature. “The whole collection always revolves around the rose,” Marras offered. “First, you think about the prints and then everything [takes] shape. The rose is an infinite source of inspiration for the color shades and harmony.”