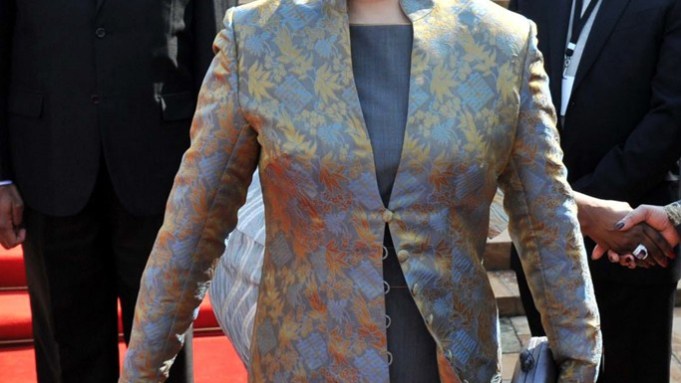 BEIJING — Even before Peng Liyuan became the first lady officially and publicly, Vogue China’s Angelica Cheung was working on an interview. Last week I met with Neiman Marcus, and the discussion also turned to the newly anointed first lady.

The question came up: “Wouldn’t she love to support a program that helps Chinese designers go international?”

It’s a loaded question. In principle, the first lady is promoting Chinese fashion by wearing it. The buzz she created for the Chinese ready-to-wear brand Exception de Mixmind is phenomenal. Exception went from a niche brand to a household name overnight.

But, and this is a big BUT, getting her support for your program is an entirely different matter. China is an authoritarian state where the power base does not support anyone and everyone supports the power base. If the first lady wants to put her weight behind Chinese fashion, most likely she will create her own program through an official Chinese agency, an entity such as the China National Garment Association.

There are three reasons for this — other than the simple fact that in China, official power normally does not play second fiddle to anyone else’s program.

First of all, it’s the vetting process. This is normal anywhere; the first lady has a reputation to protect. Just to give you two examples: About 12 years ago, the magazine I ran had to change its name from LOOK to iLOOK. The issue came up when we wanted to put a princeling (a term used to describe descendents of prominent party members) on the cover. Her mother initiated a vetting process about Look’s background. Unfortunately, the name of the already defunct U.S. magazine Look came up. Apparently, in an old 1950s document, probably just gathering dust in a file drawer, was a list of anti-communist magazines banned from China. Look Magazine was on that list. Not only were we forbidden to put the princeling on the cover, we were also told to prove that we were not a licensee or in any way connected with the American Look Magazine. How to prove non-association with a nonexistent magazine turned out to be a very difficult task. It’s like proving you are not related to a dead person; exhuming the body and DNA would be the only way.

Proving non-association with dead companies would be even more difficult than that. To make it even more impossible, the Chinese authorities did not specify what they actually require as proof. So not only did we not get the princeling for the cover shoot, we also had to change our name. I get a lot of compliments these days for the foresight to add the “i” in front of LOOK; it’s so much more 21st century. In reality it happened because we had some fancy ideas about working with Red Aristocracy.

Second, the first lady’s husband is waging the most fierce anticorruption campaign in modern Chinese history. Any association of his wife with a commercial enterprise is probably going to play into the hands of his political adversaries. In China, you are guilty until proven innocent. In the Internet age, particularly with Chinese social media hungry for blood, it only takes one photo to be seen as guilty, and by the time you can prove yourself free of any commercial objective, the game is already over. “The cucumber dish is already cold,” as a local Chinese would say.

Third, Chinese culture has always had a hard time dealing with its first ladies. It’s an historic bias. Starting in the Tang Dynasty in 600 A.D., Wu Zetian was the first woman empress of China. History written by Western scholars of China will tell you that she was a great ruler and brought about great prosperity in China. (See Why the West Rules — for Now, by Ian Morris.) On the other hand, Chinese history books will tell you that Wu Zetian was a vicious woman prone to fits of jealousy, so much so that she killed and pickled other concubines who vied for her husband’s favor. Both were true probably, it is what you choose to remember. The same goes for Empress Dowager. Western scholars usually give her the credit for trying to make China into a constitutional democracy, but Chinese scholars would emphasize that she spent the entire Chinese naval budget on building a park to celebrate her own birthday. The park is called Yuan Ming Yuan. It was burned down by Allied Troops during the suppression of the Boxer Rebellion. It is now called the Summer Palace, a major tourist attraction, should you ever come to Beijing.

In recent Chinese history, women don’t fare too well either. Mao’s last wife, Jiang Qing, was condemned as a member of the infamous Gang of Four, who are credited with the horror of the Cultural Revolution, a mass campaign that killed millions in China. Jiang Qing was a very pretty actress from Shanghai in the 1930s. Western writing (see Comrade Chiang Ch’ing, by Roxane Witke) would describe her as an ambitious and passionate woman, but Chinese are quite willing to categorize her as evil and insane. A more recent case is Bo Xilai’s wife Gu Kailai. She was accused of murdering the British businessman Neil Heywood in a recent trial. She was found guilty, of course, and received a commuted death sentence. Gu was a lawyer. She wrote a book called Going to Court in the USA and Winning, a story of her experience helping a Chinese company win an antidumping charge in the U.S. She is also rather pretty.

Given both history and circumstances, you would be extra, extra careful if you were the first lady of China. Peng Liyuan was a household name before her husband was known to the Chinese public. As a popular singer, she was seen and heard every year on the Chinese New Year’s Eve Gala, a TV spectacle produced by CCTV, the national broadcaster, and the most viewed program in China. She is definitely beautiful and knows how to make an entrance. All the more reason why she has to be more careful: Both her husband’s political career and her own well-being are on the line. Beauty and Politics never mixed well in China.

So how did Exception de Mixmind steal the show this time? How did they manage to get the first lady to wear their brand, generate all that amazing buzz and remain unscathed?

The answer is, they did it the Chinese way. First of all, Mao Jihong, chairman and founder of Exception, has always been more political than other Chinese designers. He is a member of the China National Garment Association and also acts as its vice chairman. This will offer him opportunities to mingle with high-ranking officials and their wives. It is an automatic stamp of approval that he is not only in the system but also very much vetted. Eventually, someone will need an outfit and they will go to him. My guess is, given Mao’s sensitivity to Chinese politics, he will tailor-make the outfits, rather than offering them prêt-à-porter. Even if he offers them items off the rack, he will take off the labels so that there is no suspicion of commercial interest in his offer. The fact that the first lady actually wore Exception and allowed the publicity to continue for the brand shows that Exception has paid its dues.

Despite its long association as the couturier for the first lady, Exception was very low key about its role in dressing her. There are all sorts of rumors: One claimed that when the first lady stepped out of the plane in Russia, Exception’s Web site actually claimed to have made the navy blue coat, but this was soon deleted by the Web site. The news really spread when www.nofashion.cn, an Internet-based fashion industry news site, reported that the outfit was made by Exception.

Once the news broke, both domestic and international media went crazy, with everyone looking for the story, a comment, some kind of angle to write this story. A reporter from another newspaper told me that Mao Jihong refused to do interview or even admit that Exception actually made the outfit. Interestingly, he also said that he couldn’t confirm anything until it was officially confirmed. This probably means he was waiting for an official nod from the first lady’s office to go public about the outfit. The guess work continued with the media and the public. There was so much interest in the fashion that the Exception Web site crashed and was only restored after a three day blackout. There were rumors that it was not Exception but Useless, the upscale brand by Exception and currently managed by Mao’s ex-wife, Ma Ke, a very elusive Chinese designer. Despite the lack of public acknowledgement, the buzz was tremendous.

Almost a week after the Chinese first lady stepped out of the plane, Exception finally came out with an official notice which simply read that some of the first lady’s clothes were custom designed and handmade by the team at Exception and Useless. And none of it would be available at Exception stores around China, the note hastened to add, I assume to deflect any suspicion of using the first lady as a sales tool in this case. On weibo, www.nofashion.cn immediately forwarded the announcement and proclaimed it to be the worst public relations job ever. The domestic media reports faded after the first week. The overseas Chinese Web site www.dwnews.com reported that some “old comrades” were unhappy about the quantity and quality of reports about the first lady, claiming that she has eclipsed her husband and Chinese policy. I guess you will not hear any Chinese leader identify himself as “the man who came with his wife” anytime soon.

So what are the chances of Vogue getting an interview with the first lady and splashing her on the cover, like American Vogue did with Michelle Obama. Realistically, there are several obstacles. First, Vogue does not have a long personal relationship with the first lady. More likely, Fay Wang and younger, more westernized singers are more to the taste of Vogue. But more importantly, Vogue is generally seen as a fashion magazine that promotes Western luxury goods. Is this a good association for the first lady during an anticorruption campaign? All in all, it seems to be a long shot.