Because, although she walked runways in Paris and New York for 10 years, she wouldn’t be recognized by name or face... 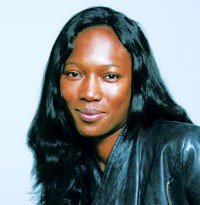 Because, although she walked runways in Paris and New York for 10 years, she wouldn’t be recognized by name or face — except for maybe being mistaken for Naomi Campbell. And secondly, it’s clear she didn’t intend to actually make a business doing it.

“I knew I loved [making bags], but I didn’t know you could make a living out of it,” she said, sounding a bit naïve, considering her background. “In Africa, everybody does things like this, it’s like a hobby. But no one takes it as seriously with marketing and things as they do here.”

The 30-year-old former model studied with a local tailor in her native Mali and later moved to Paris for a more formal education in fashion. In 1994, after a year in school, she didn’t have enough money to support her passion — handbags — and was encouraged to model. She walked runway shows for houses such as Christian Dior and appeared in ads for United Colors of Benetton.

It was on a shoot for Elle that photographer Gilles Bensimon saw a handbag that Blondeau had made and urged her to get in touch with Stefani Greenfield, co-owner of the Scoop boutiques.

Greenfield bought a selection of the bags, which wholesale from $200 to $350, and they are expected to arrive within the next few weeks.

The suede bags are manufactured in Morocco and Turkey. They come in violet, white, black and brown and feature intricate Moroccan-inspired embroidery. Blondeau also makes alligator-embossed leather clutches with large metal discs on the flap.

“Even though the bags are structured, they’ll still work with our long skirts and the drapy cotton voile things we have coming in,” she said.

Blondeau hopes to place the collection in a larger specialty boutique such as Bergdorf Goodman, but couldn’t estimate sales projections for her first year in business. She has no sales representation yet.

Blondeau traveled back to Mali for the holidays and regrets not bringing back any of the fabric that has inspired her from the start. Next time, she said, “I’ll bring my whole village.”