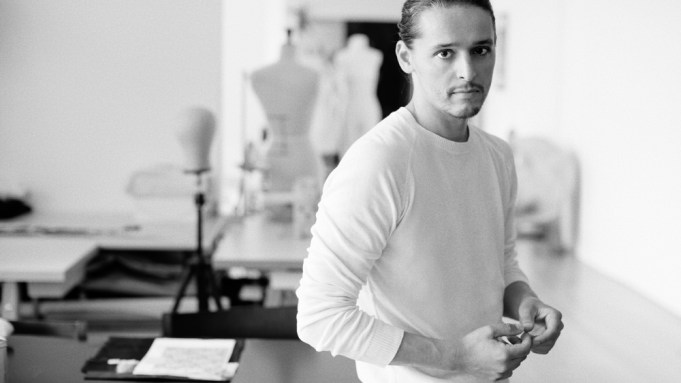 PARIS — Olivier Theyskens has been named artistic director of Azzaro, WWD has learned.

He is to design the Paris-based brand’s couture collections, ready-to-wear lines, and accessories for women and men.

Theyskens’ first collection for Azzaro will be unveiled during the next couture shows in the French capital, scheduled for July 5 to 9. He succeeds Maxime Simoëns, who spearheaded the house’s design for two years, starting in 2017.

“It’s a house that has more than 50 years of creation; it’s vast,” Theyskens enthused during an interview. “There is a sense of pleasure, self-confidence and choice — personal choice — and also an aspect of couture that has been in the foundations of the house.”

Founded in 1967 by Loris Azzaro, the house is perhaps best known for its popular men’s fragrances — and for slinky, body-hugging gowns worn by the likes of Raquel Welch, Sophia Loren, Jane Birkin and Marisa Berenson.

“There is definitely a style from the end of the Sixties and the Seventies, and it’s obviously about very sensual, beautiful femininity,” Theyskens told WWD, noting he would be taking in Azzaro’s heritage “to understand how I can be inspired by this legacy, but also project [its values] in our contemporary times.”

To be sure, Theyskens’ fashion career has been intertwined with brands with important perfume legacies and businesses, having previously designed for Rochas and Nina Ricci.

At its peak, Azzaro’s worldwide market share in men’s fragrances was once estimated at up to 10 percent.

Theyskens trumpeted the brand’s legacy of beauty and glamour. “The house standards are in couture and high-scale, high-quality ready-to-wear,” he continued. “It’s a fashion that is more connected with atelier studies. It is very exciting for me. I’ve never really been in that environment that much, because the shows are during the haute couture week.”

Asked how he might approach Azzaro, Theyskens said: “I always want to create something relevant for the house and for the name I work for. So I feel very free to not necessarily do things in a certain way. I think the most important thing is being inspired by how your creation has a natural tendency to meet with what should be done for the brand, and that’s the fuel I have. That’s what I’m looking for.”

Azzaro has staged coed couture shows for the past two seasons, intermingling ready-to-wear with high fashions.

“We’re not really thinking about, is this is couture and is this ready-to-wear,” said Gabriel de Linage, chief executive officer of Azzaro, who joined Theyskens for the interview. “We are just creating pieces, and then some of them are couture and some are ready-to-wear, which is why we are mixing the two universes in the show. It’s one inspiration for all the collections.”

The executive cited a strong synergy between the brand’s couture and rtw, as well as its diffusion line, called Paris, which draws from the same theme.

“It’s a philosophy not to segment too much because actually the distribution is the same way — they are trying to break boundaries and mix exceptional pieces with more [day-to-day] pieces,” said de Linage.

Theyskens will design accessories, too. That’s a category, along with Azzaro fragrances, that is expected to be part of the purchase of the Clarins Fragrance Group by L’Oréal in the first quarter of this year.

While serving as artistic director for Azzaro fashion, Theyskens will continue designing his eponymous brand.

He launched his first collection while an undergraduate at the École Nationale Supérieure des Arts Visuels de la Cambre — and catapulted to fashion fame at age 21, when Madonna wore his black satin hook-and-eye gown to the Oscars in 1998. Theyskens quickly became synonymous with sleek, Gothic chic spiked with drama and grandeur.

He put his signature brand on hiatus when he joined Rochas in 2003 and won critical acclaim for his romantic, Edwardian-esque silhouettes. Three years later, Rochas owner Procter & Gamble Co. shuttered the money-losing fashion house to concentrate on fragrance.

Theyskens, whose designs have been sported by Nicole Kidman, Cate Blanchett and Emma Watson, won the CFDA International Award in 2006.

Next up was a three-year tenure at Nina Ricci, where he further cemented his reputation for poetic and emotionally charged fashion shows, although failing to find commercial traction for his designs.

In something of a left turn, Theyskens spent three-and-a-half years at American sportswear label Theory — known for its minimal basics — starting in 2010.

After a hiatus, he re-launched his signature brand in 2016, basing it out of a storied mansion in Paris’ 10th arrondissement. The label is now distributed in around 40 high-end stores worldwide.

“We have been growing steadily,” Theyskens said of his privately held business. “I have always been in a mode to go cautiously with it, because we self-produce everything [in Italy]. I work with a very tight team, in a very enjoyable spirit. We are still a bit in a start-up state of mind.”

The designer follows his own instincts and cherry-picks the doors that carry his brand.

“I have been focusing more again on Europe actually, because we are doing very well in Japan,” said Theyskens. “The U.S. market is kind of stable for us, but there is a dynamism in Europe.”

De Linage said he selected the designer for Azzaro because Theyskens “has quite a rare capacity to step into a heritage and bring his own flair to it, being 100 percent consistent with the heritage,” he explained.

The executive sees a commonality between Azzaro’s founder and Theyskens.

“When I am talking with Olivier a really common philosophy — even sense of purpose — is designing clothes for the man and woman who will wear them,” said de Linage. “That was something very, very important for Loris. He had an obsession for wearable clothes, but exceptional wearable clothes, and I think in a way Olivier has this same approach.

“Of course there are some echoes in terms of style — the architectural sensuality, the contrasts in fabrics or the audacity in the cuts,” he added. “It is very exciting to see this association between Azzaro and Olivier, because it’s two different universes [yet] having the same vision and philosophy. Then afterward it’s the playground for Olivier to express another aspect of his creation, but with the same spirit and values, which is the most important for the brand.”

Azzaro was relaunched three years ago when the house celebrated its 50th anniversary. It was featured in a retrospective at the Musée des Arts Décoratif in Paris in 2018.

“We are in a very good growth rate,” said de Linage, without divulging revenue figures. “Since the relaunch, we have been doubling the sales.”

Among plans are to add four more corners in Galeries Lafayette and to enter Asia this year.

“We have a big project for China,” said de Linage, explaining Azzaro is in discussions with a department store there and plans to launch on Alibaba’s Luxury Pavilion.

“We have many celebrities wearing the brand,” said de Linage. “You can see a very strong appeal for [Azzaro]. The last two shows we have received requests on the night of fashion [displays] from celebrities saying, ‘I want to reserve this and this.’

“We are not paying for placement, so this is something that shows the desirability and all the excitement around Azzaro,” he noted.

Since the house’s founder passed away in 2003, Azzaro has been led by a series of designers, including Vanessa Seward, Mathilde Castello Branco, the duo of Arnaud Maillard and Alvaro Castejón, and Simoëns.