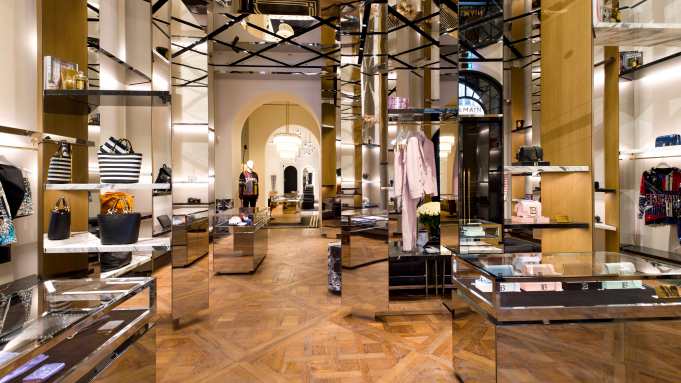 A select group of editors got a preview of the store, located on Rue Saint-Honoré, one of Paris’ hottest and most exclusive retail arteries, for the staging of the house’s inaugural couture show under creative director Olivier Rousteing in January, held on the site’s ground floor. A cocktail party is planned for the day of the house’s ready-to-wear show on March 1.

Designed by Rousteing in collaboration with Studio AMV’s Anna Philippou, Marie-Charlotte Prosperi-Fouchard and Victoire Guerlay, the two-story boutique — the brand’s largest store, measuring a total of 6,845 square feet — was conceived as a series of rooms.

Channeling a Parisian apartment, it opens with a library-inspired space featuring a parquet floor, towering mirrored columns and marble shelves stocked with women’s bags. A small passage themed around a game room with a custom-made chandelier and game-table-inspired merchandising unit housing small accessories is flanked by a safe wall with jewelry displays. It leads to a lobby-style men’s and women’s footwear space, and beyond that an intimate cash desk area — rather like a casino cashier’s booth, only for splashing cash as opposed to recouping winnings.

The décor was based on mixing different decades, cold and warm elements, and classical Parisian features with modern twists. Case in point: The grand staircase leading to the lower level, which has two contrasting handrails. One is a copy of the black wrought-iron balustrade from the brand’s original Rue François 1er flagship; the other is mirrored, much like the walls, which are covered in fluted gray glass.

The staircase leads down to a plant-filled area referred to as the garden. It opens on the right to a men’s room with a smoking room-inspired changing room and on the left to a spacious women’s room with parquet flooring and mirrored walls, Rousteing’s spin on the Palace of Versailles’ Hall of Mirrors, with the idea of the collections being reflected to infinity.

Representing a more traditional approach than the gender-fluid show presented during Paris Men’s Week in January, the men’s and women’s collections are marked out by black or white Sixties-inspired racks, while the new Balmain logo surfaces on everything from doorknobs to oversize velvet poufs.

Other features of the store include a one-of-a-kind digital window, designed to broadcast live or exclusive content, and the virtual reality ‘My City of Lights’ experience debuted in the Milan store, with technology and entertainment key focuses for the brand. Using custom Oculus headsets, customers can be transported into Rousteing’s world and creative process through a mix of images and sensations, with the content to be updated regularly.

“Every brand is trying to create a new shopping experience,” said Balmain chief executive officer Massimo Piombini. All of the house’s stores are being integrated with the omnichannel system, but Piombini also likes the idea of customers being able to visit the store and complete purchases online. While Balmain “is a very digital brand,” customers “want to touch the brand, understand the fit and the materials,” he said.

When Piombini joined the Mayhoola Group-owned brand in early 2017, 90 percent of the business was generated through wholesale partners. The firm remains wholesale driven, though the breakdown today has shifted to around 60 percent wholesale and 40 percent retail.

As part of a controlled rollout of flagships in key cities, a flagship will open in Shanghai in mid-2019, with the relocation and doubling in size of the Manhattan store, which will move to Madison Avenue from Wooster Street, also in the works. The plan, Piombini said, is to cap the number of stores at between 40 and 50 over the next three to four years. Including the Paris store, the total number of monobrand units currently stands at 16.

Around 25 to 30 percent of total sales are generated online, through both Balmain’s online flagship, launched with Yoox Net-a-porter Group last July, and third-party platforms like Net-a-porter and Mytheresa.com. The brand declined to share revenues.

Balmain’s top three markets today are the U.S., Italy and France, but following the recent launch of accessories, the plan is to ramp up growth in Asia.

In terms of other projects related to the brand, the aim is to premiere a documentary based on Rousteing’s life story at the Cannes International Film Festival in May, Piombini said.