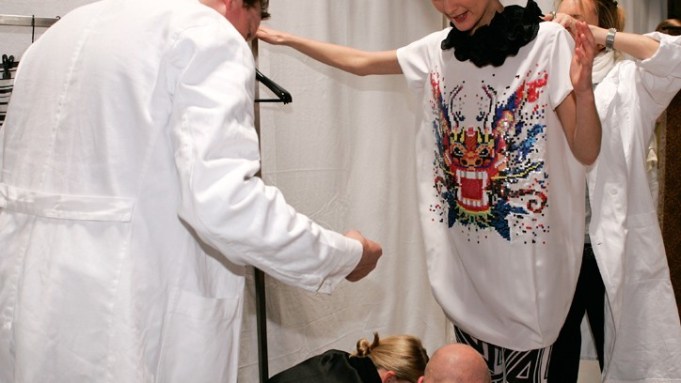 View photos of the Viktor & Rolf film shoot, only available on WWD.

PARIS — If there were a gold medal for marathon modeling, Shalom Harlow would surely win it for the Viktor & Rolf fashion film that will begin today on the Dutch duo’s Web site. “It was like the fashion Olympics,” said Rolf Snoeren, who, with Viktor Horsting, reenacted a high-tech version of “Funny Face” to showcase their spring collection. “It was 14 hours a day on high heels, but she was a champion.”

Giving WWD a behind-the-scenes look at the production of the seven-minute film, Snoeren described a grueling process in which Harlow was not only the fit model, but had to stalk the 70-foot runway in each outfit five times to be captured by as many different camera angles. Through digital wizardry, in the final fashion show sequence, to music composed by Diederik Idenburg, there will be at least three Shaloms on the runway at the same time — and special effects, to boot. Snoeren said the two-day shoot in an Amsterdam studio was perhaps less stressful than a live runway show, but involved superlong days and a crew of some 50 people, including a foot masseur for Harlow to keep her on her feet. “It was the only way she could get through the ordeal,” he said. “She is probably the most positive, easy girl we know. She was biking through Amsterdam.”

The film opens with Harlow saying she’s late for the show, echoing lines from Audrey Hepburn in the cult fashion film, and resembles a music video, but is also “like nothing you’ve ever seen on the Internet,” Snoeren said. “I think it looks very slick.”

As for the 20-look collection, it mixes bold shapes, romantic frills and a flame motif in colors, shoes and jewelry for an energetic, copy-paste dynamic, said Snoeren. “The overriding theme is that it’s very contrasting and nervous,” he said. “We were in the mood for something very hyped-up.” The collection also features three made-to-order dresses embroidered with 20,000 Swarovski crystals, including ones with a black matte effect, that took 10 weeks to be crafted.

And as much as Harlow’s feet suffered, so did Horsting and Snoeren’s hands, given their enthusiastic response to her every runway pass. “I’ve never clapped so much as in those two days,” Snoeren said.