The 22-year-old actress discusses the message behind the line, the effects of social media, as well as her many endeavors, including her recently released film, "Infamous."

Bella Thorne is ambassador of clothing brand Drihp. The H in the name stands for hemp.

“Everyone in the industry has been really crazy affected,” said actress Bella Thorne of the coronavirus pandemic. “I’m really interested to see how the protocols will work. I think they will.”

After months of shutdown, California Gov. Gavin Newsom has given Hollywood the green light to resume business this month. Following the news, trade association Alliance of Motion Picture and Television Producers released a proposal for health and safety guidelines, including limiting intimate and fight scenes, as well as discouraging live studio audiences.

“I’m kind of excited to see what that protocol looks like, if it’s going to look just as good as it did before or if you can tell that there’s not enough hands on set, and we needed help to pull it off,” continued Thorne.

In this new climate, many studios opted to delay releases, though it’s not the case for Thorne’s newest film, “Infamous,” which premiered June 12. It’s out via Vertical Entertainment on premium video on demand and was shown in close to 50 theaters, earning more than $160,000 that weekend, according to reports. Chatting over the phone from her home in Los Angeles, Thorne was celebrating its release.

“It’s my first number one in America,” she said with excitement. The film topped the ranks in theater releases, according to her publicist.

“I’m just so f–king happy,” Thorne went on. “I’m so happy and thankful that the fans came out and saw this at all the drive-ins. We were sold out. The fans are really reacting to the movie so well. They’re understanding it, talking about it. It’s thought-provoking. They want to share it and understand the main message of the movie.”

A modern “Romeo and Juliet” meets “Bonnie and Clyde” tale, the story centers on a young couple who stream their series of robberies across the country, becoming social media stars.

“We think social media is the monster, but no, we’re the f–king monster,” said Thorne, not holding back with the F bombs. “It’s f–king us. We are the problem, and we need to stop blaming it on this Internet s–t.”

The overall message of the film is a warning on the negative impacts of the platform. As a 22-year-old with more than 23 million Instagram followers, Thorne could connect with the topic.

“[It’s] telling fans, like, ‘Hey, you need to be careful about what you do online, what you say online,” she said. “You don’t know who’s having a bad day. You don’t know who’s two inches from the edge. You don’t f–king know. And just because you’re on a computer screen and you can’t say it to their face, doesn’t f–king mean s–t. It still feels just as harsh.…I think it’s an important thing to know, especially for Gen Z that’s really grown up with social media and learning to love through social media. It’s a f–ked-up way of learning how to love others and love yourself. It has really f–ked up people’s heads.”

Social media can also be incredibly powerful, she said, noting recent events with Black Lives Matter. “I think finally people are starting to see it now, with the change that we’ve been able to get done in such a short amount of time, as opposed to the years and years that people have been trekking and trekking. We’ve done a big amount of things in a short time with the power of community and people using their voice online and in the streets and standing up to the government. It’s insane, and social media has played one of the biggest parts in that.”

She’s proud of “Infamous,” she added. “It’s definitely one of my favorites of my newer work. I’m just really excited to gear people up for the new Bella in acting.”

Thorne has been working for as far back as she can remember. Born in Florida, she began as a child model at just six weeks old, before pursuing acting. As a child, she made appearances on TV on “Entourage” and “The O.C.,” then notably on HBO’s “Big Love,” followed by her big break on Disney’s “Shake It Up,” alongside Zendaya. She’s been in film productions like “Blended” with Adam Sandler and Drew Barrymore, the teen comedy “The Duff,” as well as her fair share of indies.

“I’ve just been working,” she said of time in quarantine. “I have not had a break, lots of work and more work, a lot of [do-it-yourself].…This is the first time I’ve actually been [home] two months in a row. So, it’s a time to really get things done around the house, take care of things, reflect on thoughts — but I’m scared of my thoughts, so I try not to.”

She’s incredibly prolific. Along with upcoming acting projects, as well as a recent development deal with Fox, she sings. She signed with Hollywood Records, then Epic Records, and has a new, rock and rap-influenced album in the works. (“It should be soon, especially because my fans keep harassing me for it,” she said of the drop date. “I’m just a nervous girl. I’m very nervous. I know a lot about acting, but I know nothing about music. It’s my first time really stepping into this range.”)

Writing is her first love and works its way into everything she does, she shared. She’s also a published author of a book series, as well as a more personal launch of poems that dives into mental health. During its release last year, she opened up about her struggles, including her experience with childhood sexual abuse, which made headlines.

The reason for the call, first and foremost, is to discuss her role as brand ambassador for Drihp, a clothing line made from industrial hemp.

“The fashion part of the brand is just our foot into the door,” she said. “It’s just our way of showing people that hemp is actually positive, besides just telling them that it is. What we’re really trying to do is spread awareness.” 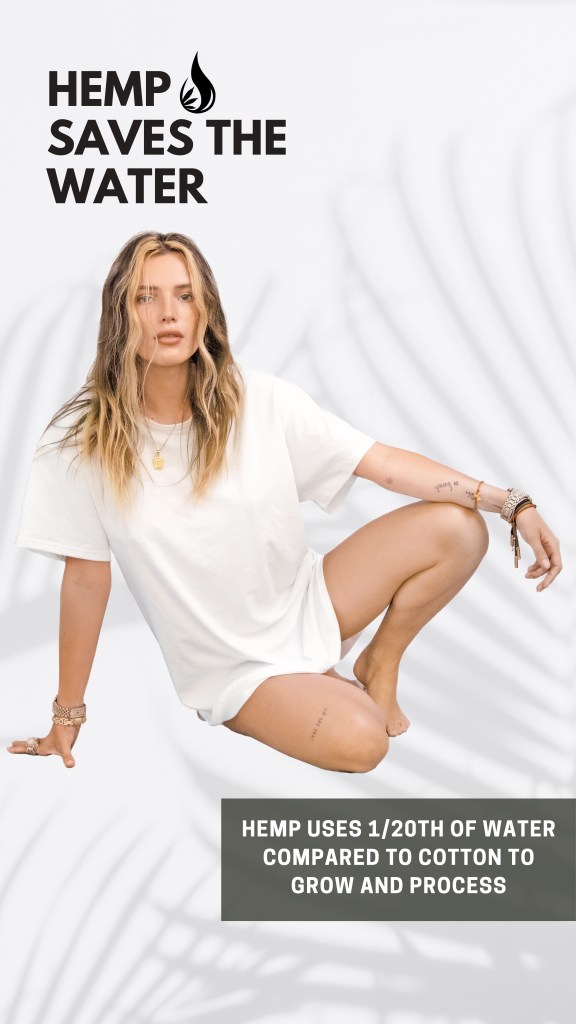 The plant, a variety of cannabis, is a more sustainable option of making goods. Even Jane Fonda has entered the conversation — since the Farm Bill legalizing regulated production of hemp was passed in 2018 — as a spokesperson for Uncle Bud, though the skin-care brand uses CBD hemp. Industrial hemp, in comparison, costs less and doesn’t include the phytocannabinoid (aka CBD).

“We want to make people understand hemp by having them feel a T-shirt and know that the T-shirt took 1/20th of the water [to make compared to cotton],” said Thorne. “Everybody needs to get on this train and ride it with us.”

Created by Luke Dandrea, who founded cannabis and hemp consultant company Clone Connect, Drihp is a unisex line featuring wardrobe basics. Items — largely tanks, Ts and undergarments — cost in the range of $40, and are made in L.A. from a blend of hemp and recycled materials. The hemp itself comes from India and China, where it’s “really growing right now,” said Dandrea.

“We acquire the knitted hemp, and then we get it blended here and manufactured here in L.A.,” he said. The clothing is breathable and doesn’t shrink, which was a challenge to perfect. Another factor is that hemp clothing is more costly to produce.

“We are taking on that cost,” he said. “We’re selling a concept. I want to educate about what hemp can do. Industrial hemp seed can change the world. It’s an extremely magical plant.”

Hemp is biodegradable and has no chemicals, he said. The plant, in fact, is the fastest CO2-to-biomass conversion tool, he continued, noting that the Declaration of Independence was written on paper made from hemp. Still, “it’s taking a while for the world to realize it’s harmless.”

He hopes Thorne can help him spread that message.

“I turned to Bella, because she has an edge about her,” he said.

Other brand ambassadors include influencers Jay Alvarrez and Rachel Cook.

“She has fought for her name and so has hemp. She bleeds authenticity. She’s somebody with a voice with weight,” Dandrea said of Thorne. 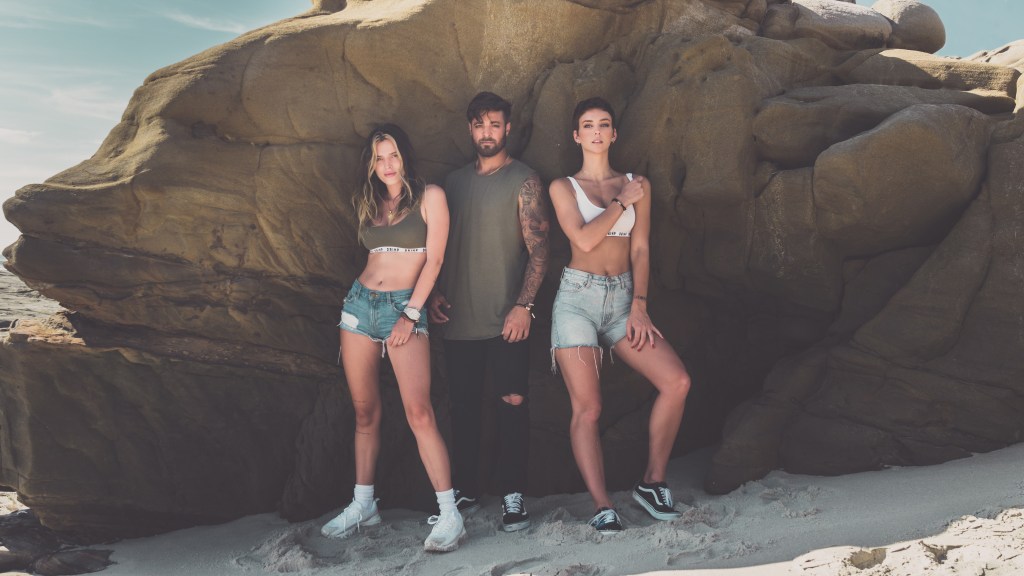 He plans to create more products, including footwear in the fall, beach towels and possibly straws. There’s no limit, he said.

For her part, Thorne said: “I love Luke, man. He really wants to make a change, do better and have others do better.”

Available on drihp.com starting June 22, the brand will also be offering 20,000 free masks made of hemp (while supplies last) for those who sign up for e-mails on its site.

“We really need to be educating people who are closed off to it, people who put hemp and cannabis in the same boat, which they’re not,” she continued. “How do we get those people to change?”