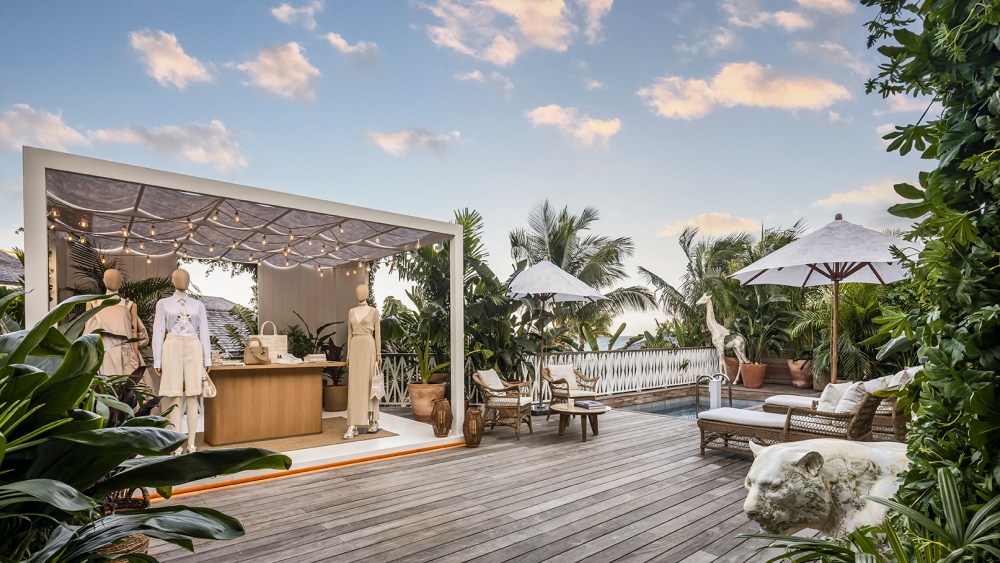 PARIS — Dioriviera is coming to the Caribbean.

After landing in destinations as varied as Mykonos, Hong Kong and Beverly Hills for summer, the beach collection went on sale on Friday at a pop-up at the Cheval Blanc hotel in St. Barths, which is set to remain open until March 4.

It’s reflective of growing synergies between Dior and parent company LVMH Moët Hennessy Louis Vuitton’s hospitality division, following the opening of a Dior spa at the LVMH-owned Cheval Blanc hotel in Paris, which bowed in September.

“LVMH is a lifestyle in all the brands that it’s representing,” Pietro Beccari, chairman and chief executive officer of Christian Dior Couture, told WWD.

“It’s not a structural collaboration, but I’d say that there’s a natural push to collaborate more and to exchange more in terms of doing something together, which is true for Cheval Blanc and one day could be true also for Belmond,” he added, referring to the luxury travel division that owns properties including the Hotel Cipriani in Venice.

St. Barths has been enjoying a surge in popularity since June, when travel restrictions linked to the coronavirus pandemic were lifted, said Christelle Hilpron, general manager of Cheval Blanc St. Barths. “We had three wonderful summer months,” she reported.

While U.S. travelers make up 60 percent of the hotel’s guests, Europeans are also back in force, and bookings are strong for the upcoming holiday season.

“We’re feeling a revival, so it’s a good time to launch an adventure like this after two challenging years,” Hilpron said. The luxurious beachside hotel has two permanent multibrand stores — one for women, one for men — including an Emilio Pucci corner.

Dior has taken over the bar and pool of the La Cabane restaurant, as well as an Ocean Suite with a private terrace and pool, where sun umbrellas, lounge chairs and an outdoor pergola have been decked out in an ivory-and-beige version of its signature toile de jouy motif.

The pop-up will carry Dioriviera pieces alongside items from the cruise collection designed by Maria Grazia Chiuri, spanning women’s ready-to-wear, footwear, leather goods and accessories. Exclusives include a white toile de jouy book tote, a bucket hat in a gold-and-white houndstooth motif, and souvenir items embroidered with the name of the island.

The French fashion house introduced the beach collection at a pop-up store in Mykonos in 2018, joining the ranks of luxury brands courting customers in summer holiday destinations with in-season merchandise and convenient temporary locations. While it has steadily added new destinations, the efforts have mainly focused on the European summer months.

Now Beccari is homing in on winter hot spots, which include the Nammos beach club at the Four Seasons Resort Dubai, where Dior recently opened a concept store featuring a 3D-printed structure made of natural materials including clay, sand and raw fibers. The St. Barths pop-up, the 19th this year with Dioriviera, will overlap with the opening of a temporary store in the island’s capital Gustavia.

“The two locations are not exactly close to one another. The Cheval Blanc is for the clients, but also for the people having a beautiful lunch on the beach or going for the day, or coming for dinner. And Gustavia will have a bigger amount of traffic, which is the natural traffic of people browsing and dining and having a drink in the city,” Beccari said.

“It’s important that Dior covers that market, too, given the successes that we had around the world with Dioriviera,” added the executive, who plans to spend Christmas in St. Barths.

While he declined to say what share of Dior’s revenues are generated by the Dioriviera capsules, add-on lines clearly play a growing role in the brand’s assortment. They include Dior Chez Moi lounge wear and the recently launched Dior Alps ski wear collection.

“We already demonstrated that these are important expressions of the brand and that we will keep nurturing them and enriching them,” Beccari said.

“[Dioriviera is] an important pillar. It’s important for business, it’s important for our image. I think it’s nice to surprise your normal client in the city and let them discover Dior under another light. It’s like when you know a person in the office and then you meet the same person on vacation — it’s very often another person,” he noted.

“It makes people curious, excited and willing to push the door and discover, which is exactly what we like about this pop-up, and [allows us to] eventually recruit new customers that maybe do not like your city look, and they prefer the more relaxed one,” he reasoned.

And it appears that Dior will further deepen its journey into hospitality. When it reopens its historic headquarters at 30 Avenue Montaigne in Paris after two years of renovations, the six-story building will have a new attraction: a restaurant designed by architect Peter Marino and run by French chef Jean Imbert.

Beccari declined to comment on speculation that the project will also include hotel rooms. “Many surprises are coming with that store, which is not exactly a store. It’s a brand statement,” he said.

Dior to Open Restaurant in Paris With Chef Jean Imbert