Founded one year ago, the sustainable brand has become a runaway hit and will debut clothes this weekend, all priced under $200.

It’s only been one year since designer Emily Levine launched her brand — making a splash last June with a NoLIta pop-up shop and handmade summer bags.

But in the time since, the New York-born, Milan-based Levine’s collection of sustainably made bags and jewelry is already carried by Net-a-porter and Moda Operandi. This weekend, she will launch ready-to-wear.

Levine initially relocated to Milan to work as a designer with Etro after attending the Fashion Institute of Technology. Trips to Japan and India inspired her to start a line and craft her own take on Japanese “Kinchaku” bags — resulting in hand-tied purses made from vintage sari fabric with bamboo arcs for handles. These “Dumpling” bags, as she has named them, as well as various linen, rattan and cotton satchels — all priced under $200 — have become sell-out hits. 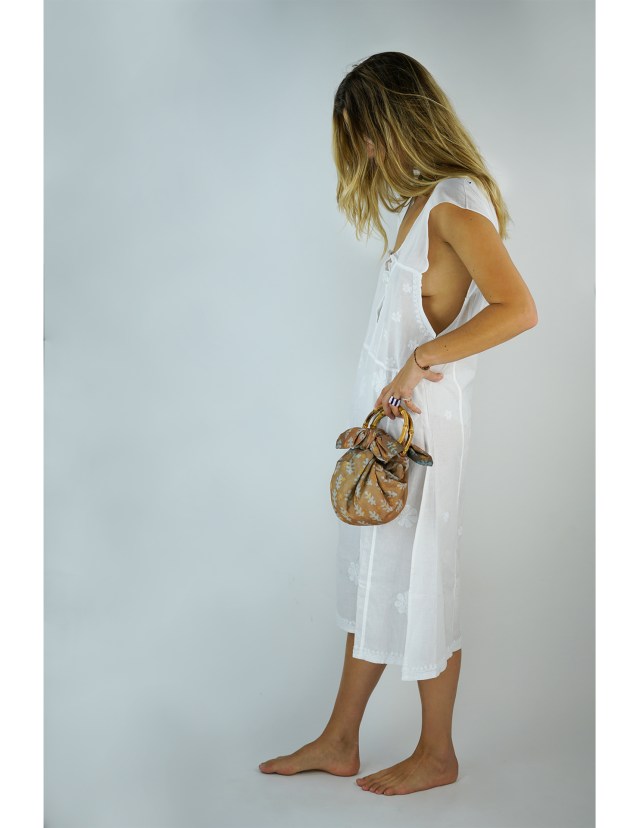 A look from Emily Levine Milan

Now clothing — largely made in India of cotton voile fabrics, some block printed and others embroidered — will join the mix. All of Levine’s new designs, including dresses, blouses, pants and skirts, will be priced under $200. They will debut on Sunday at Levine’s latest New York pop-up shop, to be held for one week at 155 Lafayette Street.

“I studied mainly clothing and apparel so obviously at some point I wanted to branch into that. I wanted it to be essentials — to keep the idea of less is more. It’s stuff I feel is missing and that I’d love to see — timeless pieces that are beautifully made,” Levine told WWD.

Gauzy, white pintucked shirtdresses, bell-sleeve blouses, and camisole slips are embellished with lace details and monochromatic embroidery. A light pink, mandarin pajama set is intended to be worn as a summer suit, while red and pink blockprint cotton pants are purposefully breezy for summer.

Levine’s clothes are intended as a canvas for her colorful accessories. “They work well with a colorful bag, it’s a great marriage between the two — the subdued look of all-white cotton or pink cotton pajamas, something you’d wear all the time,” the designer said.

Throughout the year, Levine travels to India and works closely with production facilities that employ women as a means to inspire independence and social mobility. For her rtw launch, she has worked with crochet and embroidery craftswomen across the country. “It’s taken a while to develop because we have collaborated with so many women and they all have a different hand — there is no pattern for them,” Levine said of the one-of-a-kind designs.