Designer Paul Andrew and ceo Eraldo Poletto discuss their plans to rejuvenate the storied Italian house after a year of shake-ups. 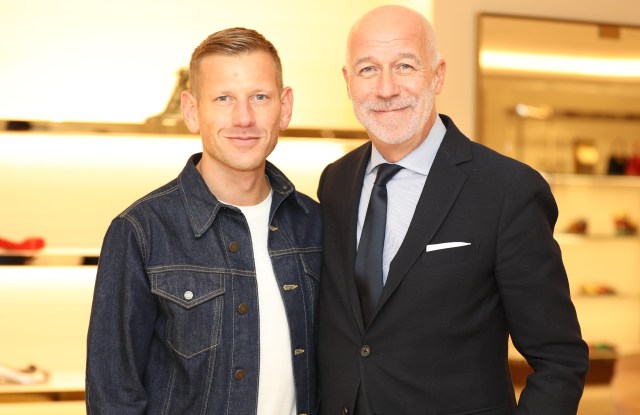 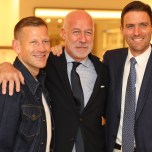 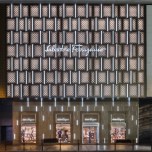 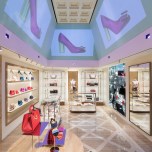 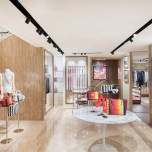 HONG KONG — Not all good things come in threes — at least not at Salvatore Ferragamo, which after a year of being led by three separate designers has winnowed its creative leadership to two positions.

On Oct. 5, Paul Andrew was elevated from his position of head of accessories to oversee all of the women’s business — apparel included — while Guillaume Meilland remains responsible for men’s ready to wear. It caps off an extended period of maneuvering that saw the departure of long-time chief executive officer Michele Norsa, succeeded by Eraldo Poletto, as the house recalibrates itself in hopes of extending beyond its repute as an icon of shoes.

While in Hong Kong to celebrate a refurbished Canton Road flagship with multiple members of the Ferragamo clan in tow — chairman Ferruccio, siblings Giovanna, Fulvia, Leonardo, Massimo, and younger generations James and Riccardo — the brand’s ceo and new creative head of women’s discussed with WWD how they are finding their feet.

“It could be even more than doubled actually,” said Paul Andrew of his new workload. “Going from overseeing one category to every single category including now advertising and store concepts and everything visual for women’s and men’s in certain areas as well. It’s demanding a lot more of my time.”

Andrew views his new task as a “return to the fundamentals” that founder Salvatore put into place. “That is this combination of high tech meets high craft meets high touch. It’s definitely the philosophy I implemented with the shoes a year ago but now bringing it to bags and ready to wear also. That means using the best in Italian craftsmanship and fabrication and make, and at the same time trying to think outside of the box and using really interesting techniques of stitching and yarn content.”

If the recent collections under the previous structure with three designers felt disjointed, that’s because it was. Andrew said up until his promotion, he had not had much contact with Guillaume Meilland, who is in charge of men’s.

“We very rarely interacted before the last month, but we’re really borrowing a lot of codes from each other at the moment,” Andrew explained. “I think it’s really important as we move forward. Part of the reason I think I was made creative director of the brand was to bring together all of the different categories to speak a common language.”

He added, “The idea that the men’s also speaks to the women’s is really important. You’re going to be able to walk into a Ferragamo store and really feel that you’ve entered a complete and cohesive environment. The girl that’s shopping here, her boyfriend is also shopping here too.”

Poletto shies away from describing the brand’s shifting course as dramatically as a reinvention. “I wouldn’t say reinventing. It’s not that… We should speak up for what we are. We don’t need to be different from what we are but a little bit more courageous. Not have too many boundaries and be creative.”

He likens it instead to showing different sides of the brand that already exists, which has included becoming leaner in its product offering.

“We cut the [stockkeeping units] a lot. It’s not just the number of sku’s but the assortment by channel by region or by store in the same city. You need to be yourself but tailor the assortment based on if you’re in Kowloon or Hong Kong side,” Poletto said, using examples of different store locations in the same city. “It is the same brand but it’s two assortments. The customer going here [on Canton Road] and IFC is very different just 10 minutes away. You need to be so sensitive — there is one brand, one philosophy — but to tailor based on the customer need and to be true to that.”

During Andrew’s initial year as head of accessories, the designer explained that he was happy to see the reaction to the Ferragamo customer trying out new types of footwear, and not just relying on the brand’s enduring and signature Vara ballet flat.

“We’ve introduced new product categories in footwear we never paid much attention to before: sneakers and even plain pumps with block heels and seeing how she reacts to that. It’s been really exciting to get her out of the classic Vara shoe and into something new,” he said.

Asked how the brand will approach apparel when it is known first and foremost for its shoes, Andrew promised, “We’re definitely going to have a point of view in ready to wear,” but added that “shoes will always be the primary focus.”

“It’s key to remember that my background is footwear so that’s top of mind for me all of the time,” he said. “The house was born on footwear and it’s our primary business still. That’s not to say that every other facet, every other category that we produce, is not as important to us. It was always Salvatore’s dream to be a lifestyle brand. But the shoes inform the proportions and the silhouettes and coloration of the rest of the collection.

“I will say that what we have in mind is quite different to what we have seen from Ferragamo in the last several years,” Andrew said.