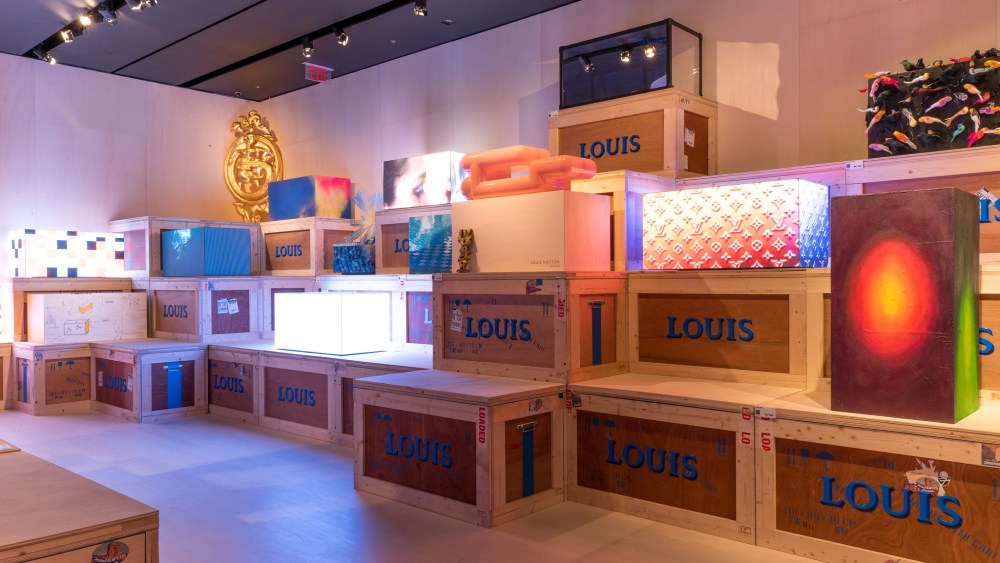 First unveiled in December in Asnières-sur-Seine, France, at Vuitton’s historic residence northwest of Paris, the traveling showcase headed to Marina Bay in Singapore last April and Los Angeles in September, before culminating in New York City.

The production marks house founder Louis Vuitton’s bicentennial birthday. He was born in 1821 and founded the luxury house in 1854.

“Louis was a creative and when you look at our business today, creativity is at the heart of everything we do,” said Faye McLeod, Louis Vuitton’s visual image director, via Zoom, explaining that the way her team approached the project was to think on “how do we mark a founder’s birthday that’s so significant?”

With trunks, of course. The maison tasked friends of the house, brands, artists, diverse creators and thinkers across art, science, and pop culture — giving them complete freedom to reimagine the iconic trunk. “We wanted to celebrate creativity and innovation in many different forms,” McLeod, who has an Assouline book “Louis Vuitton Windows” dedicated to her work, said of the participants. It opened the door to a dialogue for both established people, and less well-known creators, “a real cross section  of culture,” she noted.

There are 200 in total (which will be auctioned at Sotheby’s at the end of the year, with all proceeds donated); among them are creations by K-pop group BTS; Supreme; Lego; The Simpsons; activist Gloria Steinem; Kim Jones with Supreme; Marc Jacobs with Stephen Sprouse; makeup artist Pat McGrath; architect Peter Marino; astrologist Susan Miller, and cognitive scientist Scott Barry Kaufman.

The trunk project development took shorter than one might expect; McLeod reported that while planning was longer, the trunk building took little more than three months, partly due to the pandemic. “Really, everyone was totally used to Zoom,” she said, which made it easier to communicate and collaborate with 200 people.

Each creative received a box with a brief and was given the choice to work with the Vuitton image studio, or to create on their own. McLeod revealed that her team “looked at it as if we were a service provider, because some people were just like, ‘I don’t know where to even start.’ For artists, it’s really working with a three-dimensional blank canvas, essentially. It was quite natural for them. But someone like Gloria Steinem or Susan Miller, they maybe didn’t know how to approach an object, so we helped them. It was an amazing process.”

As the final stop, New York is the maison’s largest and most ambitious effort yet. It involves not only the exhibit but offers unprecedented insight into the collaborators’ artistic process, sharing the roots of the project to the public with “The Residency,” which transplants the in-house visual image studio team — the conceivers of the “Louis 200” project — to the basement of the space.

“It felt like what New York could really use is a space where people can understand the project and the depth that it started from,” McLeod said of the unique addition. “I really wanted people to feel that and be able to participate. I thought it would be really exciting to see how visionaries would interact with the New York community and to engage and inspire like creative processes.”

Continuing the conversation with New York City and the former tenant of the space, the maison is reopening Freds— a restaurant institution in many Manhattan circles — renaming it Freds x Louis, and bringing back the eatery’s original chef, Mark Strausman.

The Freds x Louis space pays homage to the original, mostly left untouched with “a kind of palate cleanser,” McLeod said, with the addition of wood trunk-like details, tweaking the space and melding Freds with the legacy of the French brand. It uses the original menu — the burger is back!

“When Barneys was presented to us, I jumped at it because I have a real love for this place, this institution,” she said, citing the visuals of Barneys former creative ambassador Simon Doonan as a perennial influence and inspiration on her own work.

“It was really kind of looking at New York, the energy within the city,” she said of the Vuitton Residency activation. “We wanted to give a platform for the creatives in the city to kind of be seen and to be present.”

Visitors entering the old Barneys building are greeted by a giant Monsieur Louis, composed of digital trunks stacked like a robot, emerging from the stairwell, merging history with modernity. A corridor traced with light leads to the briefing room where a Magic Box — a trunk paneled in digital screens — briefs visitors on the project.

The journey continues as visitors enter a room enclosed in metal that showcases the sleek, mechanical trunk by art director Willo Perron. Next is a room imagined by Brooklyn-born artist Francesca Sorrenti that corresponds to her signature collage technique. Two new spaces follow: a behind-the-scenes room where visitors can pause on poplar-like seating (the original trunk material) to watch interviews with the visionaries, and a gallery-style room dedicated to two-dimensional interpretations of the trunk by a mix of visual and performance artists.

The first of the two main spaces evokes a warehouse. In a staggered sculptural arrangement, the Visionaries’ trunks are juxtaposed with additional screen-paneled magic boxes, each stacked atop the actual crates that have been used for transport from France. Each trunk possesses a QR code which links guests to louis200.com providing information on each visionary and their unique accomplishment.

Other rooms include Frank Gehry’s trunk, with walls covered in crinkled paper; a glossy back room, with the “Houdini Trunk” enclosed in leather straps by Peter Marino staged with dramatic lighting, and a Refik Anadol room, with a digital “Data Fabric” trunk developed from machine intelligence and computational design.

Once visitors reach the third floor, they enter the Dreamscape, the second collective space where the remaining Visionaries’ trunks are displayed amid vivid scenography.

While that ends the exhibit circuit, the experience doesn’t finish there as visitors can then descend to the basement for The Residency, where access to the visual image studio team includes showing how they conceptualized and constructed the exhibition window displays for the Barneys building exterior, which will be in place for the months of November and December.

The first floor includes a substantial pop-up shop, selling a wide variety of products for all genders across categories including leather goods, home, books, objects and fragrances. There are a few exclusive colorways in accessories as well as the Paint Can Bag — first introduced in the men’s fall 2022 show, part of the legacy of creations by former artistic director of menswear Virgil Abloh; it’s sold out globally.

In the spirit of creative experimentation, visionaries from the exhibition have been invited on a weekly basis to host a series of workshops in The Residency, an interactive experience for visitors and local schools and educational organizations. McLeod sees a “busy, creative space that is carrying projects on for all ages.”

“I look at the windows of Barneys like street theater,” she said.  Her windows for the exhibit evolve around the concept of how the maison teams create. “We’ve got one window with the printers printing. We’ve got one window where there’s a robot making the dimensional sculptures,” she explained, with surprises in store, too. These include developing seasonal holiday-themed windows that will debut over the next few months until the exhibit winds down in December.

“New York’s an important city for us, especially for the creative community. For me, it’s been the center of the universe and the art of windows,” she said, pointing to retailers’ famed holiday windows that bring thousands of visitors to the city year after year. “We need that joy, now more than ever.”