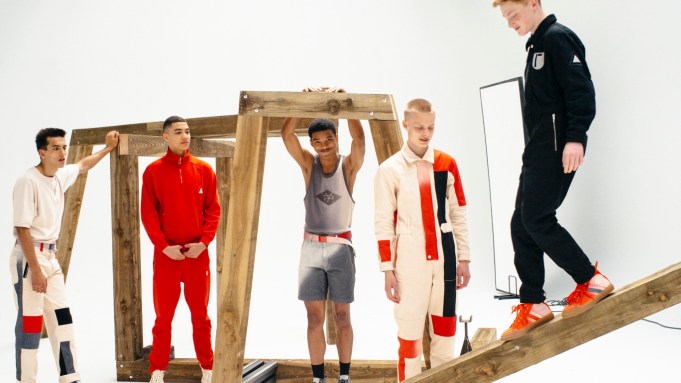 LONDON — He may be working with the Italians, photographing in London and unveiling his new collection in Berlin, but Gosha Rubchinskiy remains tethered to his native Russia. His one-off collaboration with Diesel on its Red Tag label draws on the colors, shapes and philosophies of 20th-century avant-garde Russian artists, the opera and his own Moscow youth, while Rubchinskiy’s latest projects are focused on emerging talent in his homeland.

Rubchinskiy is the third designer to work with Diesel on Red Tag, which taps fresh talent for each collection, and his efforts will be revealed on May 18 at a Diesel pop-up coinciding with Reference Berlin, a 24-hour creative festival organized by the eponymous agency.

The pop-up, at Torstrasse 67, will run for a week, and the collection will also be sold through a network of retailers picked by the business accelerator Tomorrow, including Selfridges, KM20 in Moscow, Dover Street Market, Comme des Garçons, Diesel and diesel.com.

Diesel Red Tag x GR-Uniforma draws on Rubchinskiy’s desire to create in a multidisciplinary way, explore the ideas of uniform dressing and meld his fashion with music, photography, film and set design. GR-Uniforma is the Russian’s new label following the closure of his eponymous streetwear brand last year.

“I wanted to try something new for myself, so I thought, ‘What about recording a music album? Or thinking about opera? I’m excited, because you need time to learn something, to try something you’ve never done before. I know very well how to do a catwalk show, but what about an opera? And if not a real opera, then the idea of it, the project of an opera,” Rubchinskiy said in an exclusive interview at a studio near Regent’s Park, where he’s been shooting the Red Tag imagery.

“For this collection I looked at Russian early-20th-century art, and the ideas of utopia and artists trying to build new ideas, crazy things,” said Rubchinskiy, who drew specifically on the work of El Lissitzky and Kazimir Malevich, two avant-garde Russians whose colorful, geometric paintings reflected the industrial world, and whose work laid the foundations of Bauhaus in Germany.

The result is a spare, sophisticated collection with a retro-futuristic, utilitarian feel, pops of primary color and geometric shapes recalling the work of Lissitzky and Malevich.

Knits were inspired by the Soviet athletes’ Olympic uniforms with a whiff of “Star Trek,” while the denim is robust. Some has been stonewashed, as in an ivory boiler suit with blocks of red and black.

Given the sci-fi sub theme, it’s no wonder that Rubchinskiy, who was only in London briefly for the shoot, lingered for three hours at the critically acclaimed Stanley Kubrick exhibition at the Design Museum. The show, which runs until Sept. 15, is filled with objects, costumes and elaborate stage sets from the director’s films, including “2001: A Space Odyssey.”

“I would recommend it,” said Rubchinskiy, who’s dressed in his own uniform of double denim and a pair of well-worn New Balance sneakers. “It’s big and really amazing.”

Rubchinskiy photographed the collection in the sunny London studio, bouncing between his position behind the camera and the set, a series of slanted wooden beams meant to conjure the backdrop of an opera. The conceit of this collection is that the pieces are costumes for an opera that has never been performed.

The 34-year-old Rubchinskiy said working with Diesel reminded him of Moscow in the Nineties.

“It was one of the first brands that came to the Russian market, and they used to have a store next to Red Square. I remember visiting it often, not just to see the collections but their amazing advertising, too,” said the designer, referring to the brand’s surreal, cross-cultural ad campaigns from the era.

He said he was eager for the opportunity to work with denim “because it’s one of the uniforms that we have nowadays, and Diesel means something to me.”

Rosso, Diesel’s founder and the owner of its parent OTB Group, said he wanted to work with Rubchinskiy because of his “unique take on the fashion-streetwear crossover.” Rosso said the designer’s “pseudo-uniforms made in denim for an ‘opera’” work for Red Tag, which he calls an incubator platform for “a new generation of disruptive designers interpreting our brand’s denim DNA.”

Diesel Red Tag launched in Paris in March 2018. The debut capsule was designed by Shayne Oliver, cofounder of Hood by Air, and the second saw Y/Project creative director Glenn Martens take over, showing his collection last June during Men’s Fashion Week in Milan.

Rosso said he wants the collaborations to present a new take “on the what denim can aspire to.” Prices for the GR-Uniforma collaboration range from 230 euros for a pair of trousers up to 1,000 euros for jumpsuits. Jackets cost between 500 euros and 700 euros.

The Diesel project dovetails with Rubchinskiy’s latest explorations in uniform dressing and the fusion of fashion with other creative pursuits: Not an unusual move, given that he’s also a photographer and video maker.

Last year he decided to stop staging runway shows, and halt his namesake brand, which had launched in 2008. After showing in Moscow and in Paris, he became — and remains — a protégé of Comme des Garçons, and has also collaborated with brands including Dr. Martens, Levi’s, Burberry and Adidas.

He has since moved on to GR-Uniforma, a clothing collection and multidisciplinary creative effort that examines the idea of uniform, and dressing for a purpose.

As part of GR-Uniforma, Rubchinskiy has formed Gruppa, which means band in Russian. Stepan Yasinsky and Nikita Bobkov, two musicians who met while modeling at the designer’s last show, in Yekaterinburg, Russia in 2018, contacted Rubchinskiy about a collaboration.

Gruppa released a debut 10-track album last month, while a vinyl record and accompanying book, with photographs shot by Rubchinskiy in Tbilisi and around the Georgian countryside, were unveiled earlier this week during Photo London at Dover Street Market, and at GR-Uniforma retailers worldwide.

The designer is also a driving force behind Rassvet, which describes itself as “a community of like-minded Muscovites bringing a new energy to the fashion, art, skateboarding and music scene in their city.” The word Rassvet, meaning sunrise, reflects a desire to highlight a new dawn in Russian youth culture.

Rassvet has just completed its fifth collection, including collaborative product with Russell Athletic and the footwear brand Hi-Tec. There are also wardrobe basics such as denim, striped shirts and tailored trousers.

The most recent Rassvet drop landed in April and the second will land on May 18, the same day as Diesel Red Tag. It will be stocked at stores including Comme des Garçons and Dover Street Market in Europe, the U.S. and Asia, Slam City Skates in London, Slam Jam in Italy, Union in Los Angeles, United Arrows in Tokyo and We-Haus in Barcelona.

Asked to comment on allegations of inappropriate behavior made last year by a 16-year-old seeking to model in the designer’s look book, Rubchinskiy responded with the following statement to WWD:

“The aim of my photography and art, from the very beginning, was to share my vision of Russia; a different side to what people see and hear in the media. I am fortunate to be able to travel, show people through my lens and build bridges between youth cultures. I will continue to do so, and hope that many of you will continue to support my projects for many years to come.

“Over the 10 years that I have been working on my personal and professional projects I have collaborated with a variety of models and creatives from all age groups and nationalities. For me, the people themselves, and not just the aesthetic attributes, are always important, which is why I communicated with many collaborators directly.

“I never hid the fact that we did our castings through Instagram, and discovering new talents from around the world through this platform was part of the strength of our shows and projects.

“In hindsight, I realize that I was naïve to continue to communicate with potential models myself at this stage in my career. Going forward, I will ensure that this process is carried out by my team, in a conscientious way, which was always my intention.

“Every show or project that I have worked on was managed in a professional manner and all the allegations made against me are completely untrue. I know that everyone who has ever worked with me can attest to this, and these false accusations do not only harm myself, but also my team, friends, collaborators and models who appear in my work.

“I am aware that there have been, and continue to be, many problems in the modeling industry, and I certainly do not want to contribute to these issues in any way.”

Adrian Joffe, president of Comme des Garçons International and chief executive officer of Dover Street Market, added: “We continue to support Gosha due to the complete lack of any evidence that he abused his power or did anything illegal. There is hardly any more real street casting these days. Many, many people use social media for casting now. We believe that one should be innocent until proven guilty, and that proper fact-checking should be the standard procedure. The lack of it is really dangerous and as abhorrent as the abuse of power itself.”

Rubchinskiy is moving on in many ways: While the origins of his aesthetic might be on the street, the designer said he’s open to so much more in the future — even tailored clothing.

Rubchinskiy added that, in some ways, the world is looking back to the ideas of tailoring and couture “and the idea of the new remix. I’ve never done full couture or tailoring, and maybe I will do something in this area. It would be interesting to study, to learn something you’ve never done before,” said Rubchinskiy, in the spirit of the experimental, pragmatic Russian artists who inspired him.