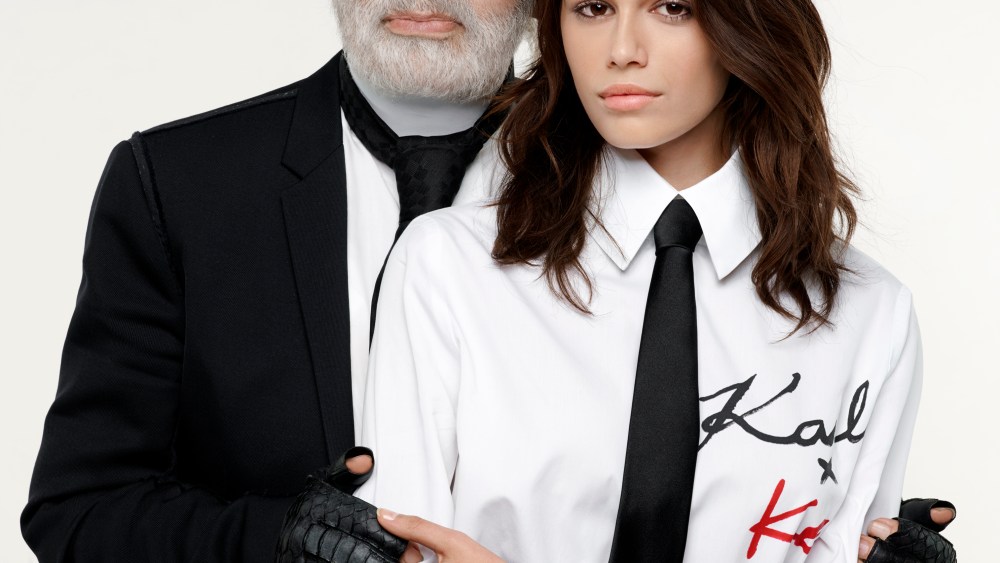 Marking the company’s largest collaborative project to date, the sporty mix-and-match line, dubbed Karl Lagerfeld x Kaia, will be released exclusively on Karl.com and with a yet-to-be-announced e-commerce player for a period of two weeks before rolling out to a network of premium retailers internationally. The launch will be accompanied by a series of events in Los Angeles, New York and Paris this fall.

Items include a wetsuit-inspired bodysuit emblazoned with the Karl Lagerfeld x Kaia logo; logo hoodies and biker jackets, and a double-breasted tuxedo jacket worn as a dress and paired with thigh-high socks and a cap to give an American teenager vibe à la Britney Spears.

All the Lagerfeld signature black is balanced with touches of soft pink, including a look pairing a chunky sweater with a leather miniskirt. Accessories include monogram chokers, mini velvet bags, creeper-style wedges and glittery sneakers.

The ad campaign, lensed by Lagerfeld in his 7L studio in Paris’ Saint-Germain-des-Prés neighborhood, features a black-and-white portrait of the designer opposite Gerber in looks from the capsule placed against shots of palm trees. The look book was shot in L.A., with skateboards among the props.

Lagerfeld, who praised Gerber’s “youthful, independent attitude,” is no doubt betting that the collection will have an effect similar to the one Tommy Hilfiger has enjoyed with the launch of his collaboration with Gigi Hadid. When the Tommy x Gigi line made its debut during Hilfiger’s first see-now-buy-now show in September 2016, traffic increased 900 percent to tommy.com in the 48 hours following the display. Hilfiger continued the collaboration with Hadid for four seasons.

Gerber, who elaborated the collection with the Lagerfeld brand’s design team in L.A. and the house’s studio in Paris, said the experience had given her “a new appreciation for how hard designers work, and how much creativity and thought goes into every collection.”

As the new darling of the social media generation of models, Gerber — who made her debut runway season in the fall, kicking off with the Calvin Klein show — boasts more than 3.6 million followers on Instagram. Other highlights of her breakout run included appearing in the Versace show with her mother, and opening the Chanel show for Lagerfeld, who in addition to heading his own label is creative director of Chanel and the fur and rtw designer at Fendi. Gerber was also photographed by Lagerfeld for Chanel’s spring 2018 handbag advertising and is the face of the main fall 2018 campaign for the designer’s namesake brand.

Gerber has already appeared in ad images for brands including Miu Miu, Chrome Hearts, Versace, Valentino, Hudson Jeans and Alexander Wang, and fronts Saint Laurent’s fall 2018 ad campaign. She has been the face of Marc Jacobs Beauty and the brand’s Daisy fragrance since 2016 and has been featured on the covers of magazines such as Vogue Paris, Love, Vogue Italia and i-D.