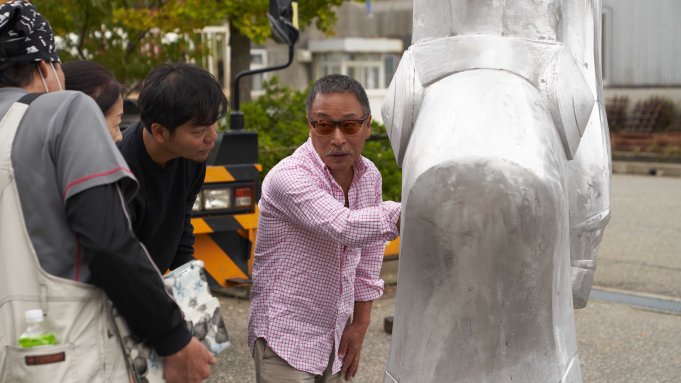 TOKYO — Kim Jones wowed his guests with the scale of his inaugural collection for Dior in June, and he shows no signs of downsizing. On Friday night he will unveil the brand’s first men’s pre-fall collection at a cavernous space on an island of reclaimed land in Tokyo Bay. The centerpiece of his runway? A 39-foot-tall gleaming sculpture of a robot woman by Japanese contemporary artist Hajime Sorayama.

“It has to be as big as a show in Paris. It has to be impressive, and it has to talk to the world, not just Japan,” Jones said. “That’s the key. It’s a global event. It’s shown at a time when people in different parts of the world can watch it live, too. That’s important. It’s as big as any other show.”

Jones, a lover of Japan and Japanese culture who has visited the country five times this year and around 100 times during his lifetime, said he has followed Sorayama’s work for years. When in Tokyo this summer, he visited an exhibition the artist was holding and met him in person. The following day, the two met again at Sorayama’s studio and began discussing a possible collaboration.

“It all happened incredibly fast. So because it was this kind of project and the timeline was so short, I thought it would be something very small,” Sorayama said. “If I had expected it to be this big, normally I would have spent more time on it.”

Jones chose a piece of Sorayama’s work that began its life as an illustration in the Eighties — “Dior finally caught up with me after 35 years,” Sorayama said with a laugh — and was later interpreted into a sculpture. The designer commissioned a towering version of it, and the artist sent the order to a workshop in Toyama prefecture. He saw its aluminum components only two weeks ago, and he’ll see the finished work, sprayed in silver mirror paint, for the first time at the show.

“From the start, we already had the actual piece [that would be enlarged] because he [Jones] took a liking to that particular work,” Sorayama said. “From the beginning we were already looking at the answer, so I think there was no issue to do it in [less than] six months.”

But the collaboration between Jones and Sorayama doesn’t end with the set. The artist also designed a Dior logo for the season, which the brand teased on Instagram on Thursday, and some of the house’s signature prints, such as cherry blossoms and Dior Oblique, have been combined with Sorayama’s futuristic imagery.

“You’ve got all these amazing, big Japanese artists: Takashi Murakami, Yayoi Kusama. He’s also, I think, on that level, but not as well-known,” Jones said of Sorayama. “And I thought it was nice to work with him on making something new and interesting. And I like the sculptures he does, because they’re actually quite tough, strong sort of robot women, and I thought that’s kind of a nice thing to have for now, and plus I was thinking about ‘Metropolis’ the film, and the woman that comes out there. And we’re in this huge metropolis, so it ties in with it.”

Inspired by the high shine of Sorayama’s pieces, Jones will show a variety of metalized and iridescent garments on Friday.

“Humans are interested in things that are shiny or made of bright metals. They react, like the changes of copper coins [over time]. Primitive people saw gods in shiny things,” said Sorayama. “And I’ve also liked shiny things since I was a child, so basically my illustrations include shining light, reflections and transparency. Whether I’m drawing just a regular woman or a robot, my eyes go to those things. It’s what I’m interested in, so that’s all I draw.”

The decision to stage his first pre-fall show in Tokyo was a natural one for Jones, and not only because of his own affinity for the city.

“The first and foremost reason that it was Tokyo is because Mr. Dior had a strong relationship with Japan,” the designer said. “And he really loved Japanese culture and there were lots of references to it in his work, and also he worked on designing lots of things for Japan. So I thought it was nice to take something from the past, which was the link, and then also the fact that I love Japan and I thought it would be the place — it’s always been a dream to do a big show here, and here we are.”

Jones said the idea of adding pre-fall collections to Dior’s men’s offering was something that was in the discussions between him and the maison from the beginning. Presenting the collection with a full-scale runway show seemed like a logical next step.

“I just think, as a designer, it’s more fun to do a show. It’s nice to make Dior feel much more global because it’s such a big brand, and just to say, ‘hey, we’re here, we’re doing a new thing, you know, see it.’ I think you’ve got to go into these things with conviction and confidence, and that’s what we’re doing,” he said.

In his first season with the house, Jones worked with the American artist known as Kaws, who also created a large set piece for the spring show. The designer said the artist collaborations were inspired by the career of  Dior himself.

“Mr. Dior was a gallerist before he was a couturier, and he was working with people like Picasso and Salvador Dali, who were huge artists of their time. And I thought, these people have a big influence on things, but in a very different way,” Jones said. “Culture is extremely important in fashion now, and I think working with Kaws on the BFF, which is Mr. Dior and his dog Bobby, and then the idea of Sorayama’s statuesque, ‘Metropolis’-type vision is interesting, and then to talk about the language of Mr. Dior prior to Dior is important, as well as Dior. Because he did Dior for 10 years, but then he also did lots of other interesting things.”

Even before the show wraps on Friday, Jones is looking into the future, planning to continue showing pre-fall collections in cities around the world.

“If you want to build the business, you have to show. People always have the discussion about, is the show relevant, but it’s the best way for people to see how clothes look,” he said. “People love going to shows. A lot of our clients come to shows, and that’s really nice — you involve them in something. I like to have the experience of meeting the customer, meeting the people that sell the clothes, meeting everyone.”