In an exclusive interview, the artist tells WWD about his close ties with fashion, thinking like a brand, and going beyond color.

PARIS — Time waits for no man — especially not guests at the Dior men’s show.

A teaser image on Instagram for Friday’s display by Kim Jones, to be held at the Institut du Monde Arabe in Paris, features an eroded wall clock with rapidly spinning hands, dropping a major hint about the artist he has chosen to collaborate with this season: Daniel Arsham.

Known for his immersive exhibitions featuring objects that look like they have been salvaged from the past — a concept he has dubbed “fictional archeology” — and for his collaborations with brands like Adidas, Arsham designed the set for the show and also worked on the collection itself.

Guests arriving at the venue will walk through a room inspired by founder Christian Dior’s office, dotted with the kind of petrified objects that Arsham refers to as future relics.

“It’s not based on any one particular space. It’s kind of an amalgamation of the studio in Paris, his house in the south of France, and then detailed photos of a particular image of him on the phone, making drawings or writing notes at his desk,” the artist told WWD.

“We kind of pulled out these different elements, and a couple of the objects I’ve really re-created as I would, in art, work one of my cast pieces. Those works also form a signature element within the collection, one being a clock that’s still physically there, in the atelier in Paris,” Arsham added.

Beyond the specific motifs that will appear in the clothing designs, he said the collection was infused with a general feeling of decay. “A lot of the work has this quality where they look like they’re falling apart, but they could also be growing together,” he noted.

During his previous tenure as head of men’s wear at Louis Vuitton, Jones worked with artists such as Jake and Dinos Chapman, but it’s only since joining Dior last year that he’s made art collaborations a central feature of his design process, tapping Brian Donnelly, aka Kaws; Hajime Sorayama and Raymond Pettibon to work on his shows.

Jones noted that Dior himself started out running an art gallery, and was the first person to show important works by Salvador Dalí, a historical fact echoed in the Surrealist effects that appear in his spring 2020 collection.

“Authenticity for me is key, and things like that, it makes people understand. And I think young people enjoy all that information being given to them now, because there’s a certain limit to the history that they’re seeing, because it’s all online,” the designer said.

“All my friends’ kids are getting back to wanting to see things in real [life] and not find stuff out on the Internet, and actually go and read a book. Things are changing slightly, which is positive,” he added.

He and Arsham have a lot of mutual connections. The artist earlier this year created a suitcase for Rimowa, the German luggage maker which, like Dior, is owned by luxury conglomerate LVMH Moët Hennessy Louis Vuitton.

Rimowa’s ad campaign this season features Jones, alongside personalities such as LeBron James, and Rimowa chief executive officer Alexandre Arnault hinted there is more to come, posting a picture on Instagram of himself with the designer captioned: “Something is cooking.”

Arsham has also been friends for years with Matthew Williams and Yoon Ahn, both members of the Dior men’s design team, and he shares a gallery, Emmanuel Perrotin, with Kaws. “It just kind of felt like this natural fit,” he said.

Jones said they both share the same long-term perspective.

“I like the fact that he’s looking at the present now in a future tense. And when I do these collections, I always think about what’s going to go in the exhibitions about Dior or Vuitton, whenever, in 50 years’ time, so it’s kind of important to have things that can create a legacy for the brand further along the line,” he explained. 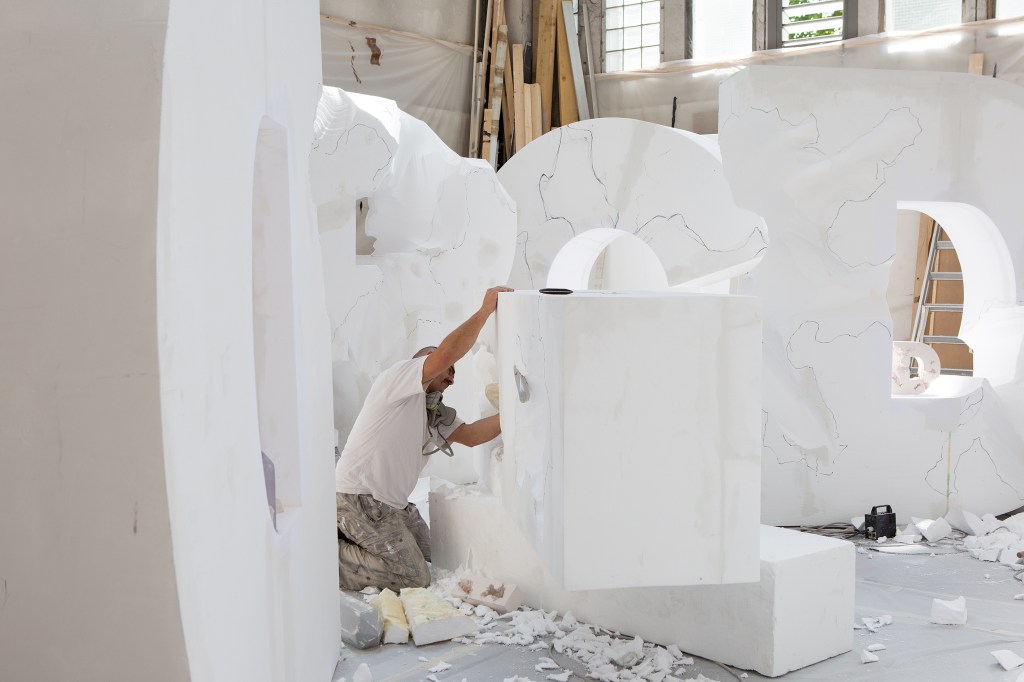 Arsham had worked with Dior on window installations in 2011, but noted that was under a different creative team. “One of the things that has been great working with Kim is really his deference to my work, and thinking about ways of staying true to it. He wants the audience to really experience what they might in an exhibition,” he said.

The show space itself will be decked out in a pink color gradient that is another recurring feature of Arsham’s work, and is rooted in his color blindness. “If you look at the lineage of my work over the last 15 years, it’s largely void of color up until maybe four or five years ago, when I had this experience with some lenses that partially correct my color vision,” he explained.

“The glasses really showed me not only new color, but which colors I was able to see consistently without the lenses. A doctor tells you you’re colorblind, you don’t really know exactly how your experience differs. A lot of the colors that I’ve tended to use after that are colors that I see quite well with the glasses and without, pink and blue being one of those,” he added.

In an echo of the weathered look of his art works, the runway — dotted with giant eroded letters spelling out the name Dior — will literally decompose during the show. “The floor of the space where the models will be walking is actually made of sand that has a gradient from white to pink, and as they walk through it, they’ll disrupt the perfect gradient and they’ll leave this kind of trace in the ground,” Arsham explained.

The artist said fashion collaborations have been central to his practice since he first worked with choreographer Merce Cunningham in 2006. “Part of his brief to me, in the first stage work that I created for him, was all visual elements, which included the physical stage design, the lighting and the costumes — none of which I had ever done before,” he recalled.

It’s also part of his daily life: at his studio in Long Island City, Arsham and his team wear a working uniform of white lab coats and other items specially made for them by Kith designer Ronnie Fieg and Samuel Ross of streetwear label A-Cold-Wall.

“A lot of my close friends are not visual artists, but they’re people in fashion. I don’t know how it got like that, but I’ve learned a lot about creative approaches in the way that they use material and things like that,” he remarked.

His work with Adidas has turned him into a rock star among sneaker heads, who snapped up designs such as his Futurecraft 4D.

“One of the main reasons that working with Adidas interested me was their reach to an audience that doesn’t go to galleries,” Arsham noted. “As much as I can kind of integrate these audiences, I think that’s beneficial both to my work, and to people’s experience in general.” 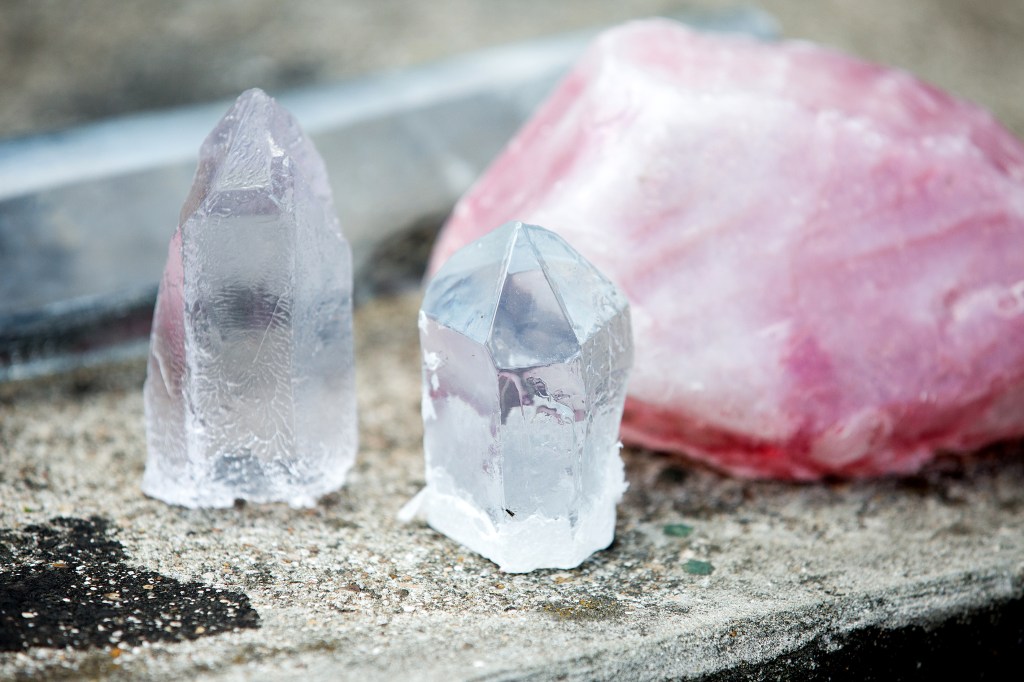 While he has a separate design practice, Snarkitecture, that creates furniture, spaces and objects, he considers his fashion collaborations as part of his art output.

“They’re exactly the same for me. I have a show that’s opening a week after the Dior show in Shanghai, and the Rimowa cases are in that show, the collaborations that I did with Adidas: I mean, this feels in some ways new, but Warhol and a number of artists from the Sixties onward were already incorporating this idea of pop culture and a wider group of objects into their body of work,” he remarked.

“These brands are icons of a particular moment in time, and in all of my work going back, I’ve always selected, you know, a Leica camera, or a Jordan sneaker, or a Spalding basketball, and I’ve remade these things in these geological materials,” he continued. “The selection of the object itself is in some ways as important as the visual quality of the work.”

Arsham noted that the concept of artist-as-brand is not new. “This has been true for a long time, mostly for dead artists, so you could say that Van Gogh is a brand — there are T-shirts and all kinds of things around that universe. So I feel like you may as well engage with that audience while we’re alive,” he said.

“I also think it makes the playing field much more even. The sneakers I did for Adidas [are in a] completely differently price point, obviously, than an art work. The same is true for the editions that I make. The work should not just be for museums or collectors who are in that universe, but kind of for everyone,” he added.

Bringing his work to Paris always has a special resonance for Arsham, whose wife is French and who has been with Perrotin since 2003.

“Early on, when I started thinking about doing some of the collaborations with Adidas or any of the other brands, he was one of the ones who was not skeptical about it, and I think understood the reach and the power in integrating people who are outside the ‘art world’ into the practice,” Arsham said.

He noted that not everyone is as supportive of cross-pollination.

“In the art world, there’s a certain segment of it that will never really feel like any commercial aspect of an artist’s work is relevant, and to some people, it probably disqualifies them from participating in a conceptual dialogue around what it means to make art today, but that’s just not what I think,” he said.

Indeed, he’s not afraid to branch out into areas as diverse as music, as evidenced by his recent collaboration with American rapper Nas on the teaser for his “The Lost Tapes II” album. “I want to put things out in the world that I want to see exist myself, and I’m not going to limit that for someone else’s understanding of it,” Arsham said.

He noted things are starting to evolve, pointing to the example of Virgil Abloh, who juggles design duties at Louis Vuitton and Off-White with countless collaborations, produces art with Takashi Murakami, and is the subject of an exhibition at the Museum of Contemporary Art in Chicago.

“The guy’s unstoppable in his creative output. I think there’s a different way of looking at it,” he mused.

Just don’t expect Arsham to launch his own clothing line. “I have no intention of doing that. It’s enough to work with people who are really good at what they do. It will be hard to top what we’re about to do,” he said with a laugh. 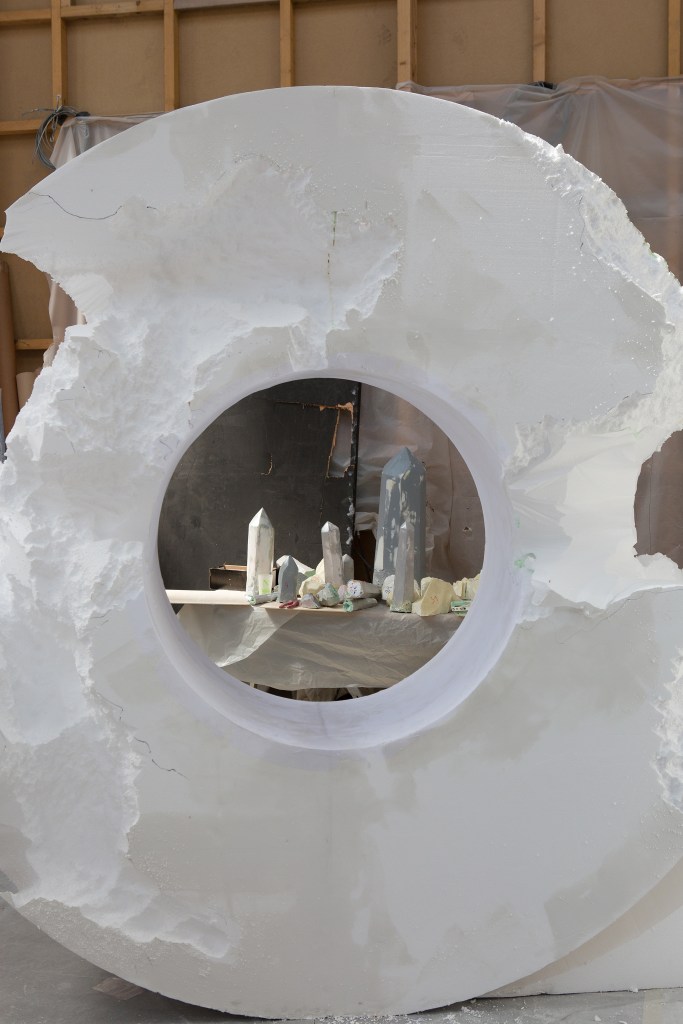