The designers are looking to speak to a broader audience with a new collection made from leftover clothing. 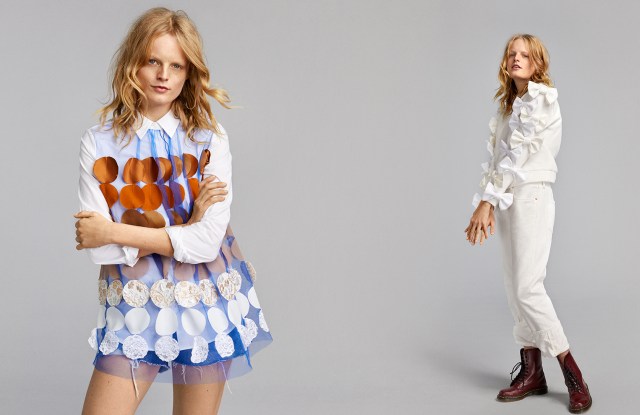 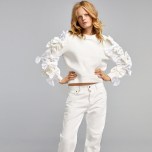 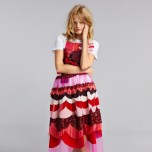 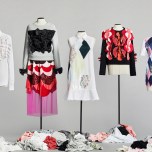 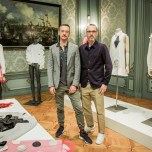 LONDON — In a fresh look at high-low fashion, Viktor & Rolf are taking their conscious couture philosophy to a wider audience with a collection for Zalando that’s made from leftover clothing.

Viktor & Rolf for Zalando RE:CYCLE lands at the retailer on Feb. 1 and is comprised of 17 pieces for spring that are adorned with sliced up and repurposed overstock from the retailer’s private label collections.

It also marks the debut of Zalando’s new recycle project, which is aimed at raising awareness around sustainability in fashion and consumption.

In an interview, Viktor Horsting said the duo’s couture collection inspired the Zalando one, with prices ranging from 50 euros for a T-shirt to 250 euros for the long dress.

“We have been working on the idea of recycling for a couple of seasons in our couture shows in various ways, and we feel quite strongly about it. We said to ourselves it would be so great to take this to a bigger audience. It was great fun to think about ways to translate a couture idea into a ready-to-wear idea, and to have it industrially produced.”

The Dutch designers approached Zalando with the idea, and the retailer later offered them piles of unsold stock from its own brand collections. Horsting and Rolf Snoeren did the design, sampling and production from their atelier in Amsterdam, and produced the collection in Italy.

Horsting said the shapes are basic, and the pieces — mostly tops, dresses and skirts — are all about adornment. “The idea was to cut up all the old garments into various shapes, and then we introduced four types of decorations. The collection is quite wearable, but also very festive and exuberant. They are statement pieces, but they’re easy to wear,” said Horsting, adding that the base patterns are made from sweatshirt materials, tulle, jersey and cotton poplin.

The Zalando overstock ranged from colored printed dresses to shirts, trousers and other daywear to sequin-adorned and embroidered pieces of clothing.

He said the challenging bit was managing the overstock, “which was constantly shifting. It would vary from day to day, so to nail it down and to really achieve the right color combinations was a bit of a puzzle. It was nice but not always easy.”

The collection features T-shirts with diamond patchwork, or different shapes made from intertwined fabric. There’s also a white sweatshirt with bows tumbling down the sleeves and a long skirt adorned with layers of red, pink and sequin scalloped fabrics.

Horsting said he hopes to work with Zalando for another season, and keep designing with sustainability in mind. “We will continue to think about recycling. It is an important idea.”

In a separate interview, Zalando’s director of group brand relations marketing Jolanda Smit said the timing was ideal for the Viktor & Rolf partnership.

The retailer, she said, wants to encourage its customers to be more conscious about how and what they consume, while Zalando has also adopted a sustainable fiber strategy and last month joined the Better Cotton Initiative.

Earlier this week, the global platform Fashion for Good said it was partnering with Zalando to further accelerate and scale sustainability in the fashion industry.

Based in Amsterdam, Fashion for Good operates via collaboration and community, inviting brands, producers, retailers, suppliers, nonprofit organizations, innovators and funders to come together to identify, support and help establish breakthrough technologies in the fashion supply chain.

Zalando has also created a short film to promote the collection. Smit said the team traveled to Amsterdam and created mini-machines that make new pieces from old fabrics “to really show customers how this all came to life. I think it really tells people that we need something old to create something new,” she said.

Smit added that Zalando’s new recycling program is still a work in progress. “We are very open to new solutions, we are also figuring this out along the way. Let’s see what else we can do, and ideally we’d gather more partners for future projects.”

The Zalando launch also marks the beginning of what will be a busy 25th anniversary year for Viktor & Rolf. The brand will show its couture collection in Paris at the end of the month, and is working on a book with Phaidon.

The designers are also preparing a retrospective exhibition in Rotterdam that will open at the end of May, which Horsting said would be similar to the one that took place last year in Melbourne, Australia, called “Viktor & Rolf: Fashion Artists,” at the National Gallery of Victoria. He said the Rotterdam show would be even bigger.

Although Viktor & Rolf no longer offers a full rtw collection, the designers create eveningwear and bridal and a small collection based on past designs called Tulle.