Demanding, superstitious and full-on glamorous: These are words often used to describe divas of the opera, especially Maria Callas. 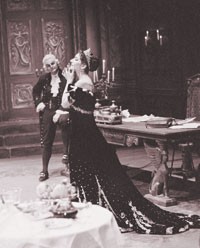 Demanding, superstitious and full-on glamorous: These are words often used to describe divas of the opera, especially Maria Callas.

The New York-born legend who died in 1977 at the age of 54 famously sang operas such as “Tosca” and “Fidelio.” But it was her debut in “Verona” at New York’s Metropolitan Opera, in which she wore a crown made by the Milanese atelier Marangoni and set with Swarovski crystals, that had her especially nervous.

However, after audience acclaim, Callas believed the crown was lucky and from then on wore only Marangoni jewels at the Met, according to Austrian crystal manufacturer Swarovski, which will unveil its “Maria Callas and Swarovski: Jewels on Stage” exhibit at the Met on Friday, after a fete tonight.

The exhibit originally premiered in 2005 in Verona, Italy, and has since traveled to opera houses around the world, including those in Vienna, Florence, London and Prague. It will be on display in New York until March 3 and will travel to Tokyo and Barcelona later this year.

The New York exhibition will offer some additional pieces, including an impressive crystal tiara and a blue and white crystal bib necklace.

“She was a very superstitious person,” Markus Langes-Swarovski, a member of Swarovski’s executive board, said of Callas. “She felt much more secure and safe with her talisman.”

Nadja Swarovski, the company’s vice president of international communications, said, “This is an effort of Swarovski to recollect its heritage. We want to celebrate the ownership and preciousness of the collection.”

“If there’s any one artist who approaches immortality, it’s her,” said Gelb. “Callas’ career at the Met was a somewhat stormy one. She did not sing as often at the Met as other opera houses. In a way, it’s great that the Met is putting up this exhibit because they still can’t get enough of her.”