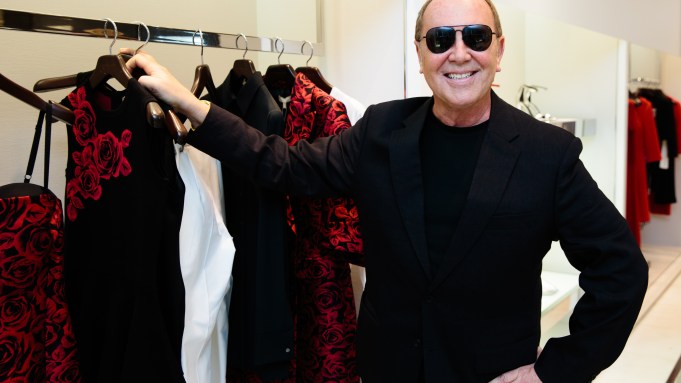 CHICAGO — “We’re rule-breakers,” Michael Kors recalled during a conversation with legendary Chicago retailer Joan Weinstein, of Ultimo, about fashion in the Windy City, during a personal appearance at his collection boutique here.

The idea of thinking outside of the box, something Weinstein was famous for as a globally influential retailer with her Oak Street store, was an overarching theme last Thursday, when the designer and former “Project Runway” judge closed shop for a seated lunch and fashion presentation at his collection boutique on 900 North Michigan Avenue in the city’s Gold Coast.

It’s also something the designer has learned from traveling and meeting his clients in person. The Chicago visit was part of a renewed focus Kors has placed on hosting more intimate gatherings. Since February of last year, Kors has hosted nine PAs in his collection stores; preceding Chicago, they included Madison Avenue, Palm Beach and Bal Harbour. Next stops include Manhasset and Southampton in August, London in September and Tokyo in the fall.

“In every city, women are looking for evening clothes that are not the tried-and-true. They’re looking for things they feel glamorous in, but maybe a little bit left of center,” said Kors, dressed in his signature all black. “Whether it’s putting on a pair of pants at night or a jumpsuit, separates, a suit, something else.”

Throughout the event, Kors chatted with clients and cracked jokes while moderating the presentation, rattling off fashion tip after fashion tip — from “try a belt,” to “DHL all your accessories, how could you not?” to “wear white shoes all year.”

The presentation showed 33 looks on models from his pre-fall and fall runway collections.

From skirts and dresses to new takes on the camel coat to glamorous furs, the audience clapped in approval, while Kors, showing the mastery of a salesman provided countless ways on how to make each look work for day, evening, vacation, even New Year’s Eve — while dropping the celebrity names who have recently worn the designs.

“Alexa Chung is on the cover of British Vogue wearing this,” said Kors, about a striped black-and-white top paired with a rose paillette trumpet skirt with microscopic sequins. “Wear it with flats, it’s casual. Take the same skirt and do it with a high black pump, do it with an off-the-shoulder top, wear it to a cocktail party. Take a pair of white jeans with you, one little cardigan, two pairs of shoes, go anywhere.”

When a sparkly “not a jumpsuit” two-piece jumpsuit came out, the designer recalled meeting Diana Ross recently. “I said to her, ‘Do I have some clothes for you,’” he said.

Another look appeared to be a dress, but to the audience’s surprise, was not.

“The other thing we’re focused on is things that feel like a dress, but they’re not. She’s actually wearing a stretch jersey T-shirt with a skirt,” Kors said. “How great, you get a cocktail dress like that, but then you wear that T-shirt back to skinny black jeans or the skirt back to a white poplin shirt. If you can pull apart a dress, it’s kind of nice to have the option.”

For some guests, Kors is like an old friend who they’ve known — and worn — since the Eighties when his line was sold at Ultimo. “I love that it’s classic and it just works for me,” said Lyn Goldstein, who brought her daughter-in-law, Ella. “I was introduced to Michael Kors at Ultimo. Greg [Zgonena, now sales manager at the Chicago collection store] worked at Ultimo and I don’t have the inclination to shop, so Greg, for 20-plus years, has gotten my things together. And it works almost for every occasion.”

Ella Goldstein praised the line’s timelessness and versatility. “Beautiful clothes that are beautifully made,” Goldstein said. “They’re classic and not outrageous. The cut is flattering for an average woman who’s not a model. Looking around, you see all types of women here and they’re all looking incredible.”

Wardrobe stylist and personal shopper Jennifer Oppenheimer said she was impressed with the collection. “There were a lot of chic pieces that were not just for black-tie events — such as the cool purse with the metal and fringe,” she said. “They were funky, high fashion and very different. I love that.”

“Exquisite” was how Dusty Stemer described the presentation and meeting Kors. “Beside being charming, he gave us all the fashion tips, i.e., wear white shoes all year long,” she said. “He really simplified daytime and evening dressing.”

Following the event, Kors said not only does he love doing PAs, he finds the knowledge gained from them invaluable as a designer.

“My job is to know what people want before they know what they want themselves,” Kors said. “I travel a lot for work and for pleasure. I’m always curious to see in a restaurant what are people wearing, what’s their idea of black tie, what do they wear to the office. When you walk down the street, how do they look? And I think a lot of fashion people live in their own fashion ozone, and they don’t kind of get out there. Whether it’s social media, quite honestly, I can’t do PAs in every city in the world, so social media is kind of like a global trunk show because we do get the feedback and there is that conversation.”

Seeing the clothes in action is the real treat.

“Everyone talks about experiential. Now the greatest experience is to see the clothes live, moving and to hear my thinking,” Kors said. “Why did we do it, what were we thinking, how could you wear it differently? How does runway turn into reality?”

One luxury his clients have is freedom.

“So many people think Hollywood leads the way for evening,” he said. “Hollywood has more rules than our clients. Our customers are more open-minded than Hollywood. At a certain point, women are like, why not think out of the box? I saw it today. I could see from their reactions and from what people were pulling and looking at.”

Best-selling pieces included a black cashmere/cotton zipper pullover, a black studded cashmere pullover, a chain fringe black calf shoulder bag and a double crepe skirt with tiered fringe. The pre-fall and fall items ranged in retail from $495 for the Holland zipper flats to $22,000 for the leopard intarsia mink and fox-fur coat.