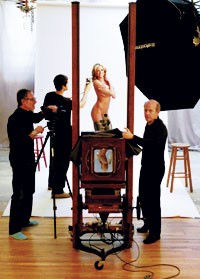 The photos are bracketed by essays from 15 literary heavyweights, performers and activists, including Salman Rushdie, A.M. Homes, Francine du Plessix Gray, John Malkovich, Nancy Friday and Gore Vidal, who weigh in on the highly charged subject of pornography.

“Sexual erotica has been around for a long time,” said Wattleton. “Sex is not someting that’s supposed to be forbidden. How about if we try saying it’s wonderful and enhances our lives as human beings. Someone of Timothy’s stature undertaking this project to open up this subject, which remains largely as a taboo, gives it a salience and a buoyancy.”

Greenfield-Sanders wanted writers with a cross section of opinions. He reached out to conservative authors, but said, “There are antiporn writers who won’t engage in a dialogue. It’s unfortunate. I would have liked to have someone radically against it.”

Greenfield-Sanders, who works in series, is noted for his portraits of artists, writers, actors and architects. At the behest of Fern Mallis, the former executive director of the Council of Fashion Designers of America, Greenfield-Sanders last year photographed 75 of the organization’s members for a gallery show and possible book.

On a recent morning in a darkened studio of the downtown post-production facility, Outpost Digital, Greenfield-Sanders, an online editor and the film’s editor, Lukas Hauser, were putting the finishing touches on the final print. The photographer leaned back and began discussing the genesis of his latest work.

“I thought, this is such an interesting group of people.”

While it’s doubtful many of the book’s readers will make the connection, Greenfield-Sanders said the photographs were inspired by Goya, whose “Nude Maja” and “Clothed Maja” painted in 1804 caused a flurry in the Spanish court. “I wanted to shoot them clothed and unclothed in the same position,” he said. “I always think in artistic terms.”

In the film, the actors strip off their armor and lay bare candid and often poignant reflections on their lives.

But some of them view themselves as just that. “I chose to be in the industry,” said a platinum bleached-blonde, Jessie Jane. “I’m very sexually aware. I’m choosing to make myself a sex symbol.”

Greenfield-Sanders makes the analogy between adult film actors and boxers who use their bodies to attain a certain level of fame and fortune. But the price can be steep. “The body gets bruised,” he said. “There’s this wear and tear on the body.”

Then there’s the psyche. Tera Patrick, a beautiful brunette, in the film looks toward the camera and confesses: “I wanted to be a nurse. You come into this business and you give up a lot. You give up your soul in a way.”

Greenfield-Sanders said it’s a matter of supply and demand.

“People want to watch other people having sex.”