The Protesters Are Coming: Extinction Rebellion Wants to Shut Down London Fashion Week

Brands are worried that climate change activists will scare off guests and disrupt shows, but sustainability figures are calling for calm — and conversation.

LONDON — First it was the antifur protesters, with their megaphones, intimidation of show guests and stuffed animals smeared with fake blood. But that’s nothing compared to what Extinction Rebellion or XR, the climate change activists, might have in store for London Fashion Week, which runs from Sept. 13 to 17.

The group has received big-ticket donations — directly and indirectly — from the likes of Aileen Getty, Joe Corré, Lush Cosmetics and the band Radiohead. A few of the activists have even appeared in Stella McCartney’s latest ad campaign, but they’ve still vowed to shut down London Fashion Week to raise awareness about the environmental costs of the industry — and urge the British Fashion Council to set up a summit to address these issues.

They are peaceful, but they don’t do things half-heartedly: In April, XR occupied Oxford Circus, blocking movement and footfall on some of London’s busiest streets. The business lobby New West End Company said retailers and businesses in the area lost an estimated 12 million pounds in two days due to the protests.

That same month, they also made headlines climbing onto a train at Canary Wharf station, while others chained themselves to Labour leader Jeremy Corbyn’s house, despite claiming to be staging a peaceful protest.

They also interrupted a House of Commons debate on Brexit, stripping their clothes off and turning their butts to face the parliamentarians in the chamber. Police had to clear the room and 12 arrests were made.

A big question is why they’re picking on fashion: By reputation, fashion is a big contributor to both waste and pollution, but the industry has been making strides toward sustainability.

In London specifically, the British Fashion Council has launched Positive Fashion, an initiative that promotes best practices and positive change in the industry, including sustainable practices, while a host of consultancies and industry organizations such as EcoAge, Positive Luxury and Common Objective have sprung up to help brands address environmental challenges. 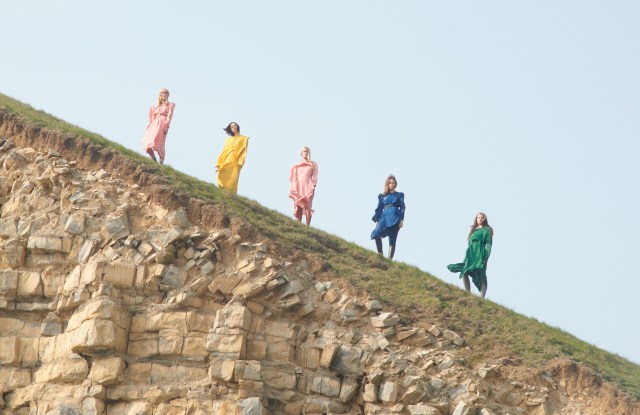 Big and small brands alike have been putting sustainability at the forefront of their businesses: Bethany Williams, Richard Quinn, Phoebe English and Mother of Pearl are just a few of them. XR has also been engaging with the industry, and speaking with the BFC — but insists the protests will go forward nonetheless.

“We have met and spoken to Extinction Rebellion several times, and we understand their role in terms of activism,” said Caroline Rush, chief executive officer of the British Fashion Council. “We ideally would like fashion week to be a platform to celebrate our incredible creative businesses, many of which are addressing sustainability challenges.”

McCartney believes the activists should have their say.

“The youth today is standing up for change and telling us that our house is on fire. The Extinction Rebellion activists, members of which featured in my recent campaign, are demanding action to the point of boycotting fashion. The science has proven clear, it’s time to shift how we work in this industry collectively and create a better future. If you think about the civil rights and feminist movements, making change and getting the world to listen is not easy and more than well worth a slight moment of inconvenience,” said McCartney.

Tamsin Lejeune, ceo and founder of Common Objective, a platform that seeks to connect sustainable brands, manufacturers and other industry figures, would agree. She believes that XR should make its voice heard whenever possible.

“The brands that do not participate in London Fashion Week as exhibitors, although sometimes as sponsors, are huge fast-fashion, high-street brands that are producing low-cost, cheap and throwaway products, and that is where the problem lies. Having said that, I don’t think Extinction Rebellion are in the wrong, they need to use every platform that is available to them,” she said.

Her advice for showgoers would be to “embrace what they are doing at fashion week and join forces with them. I think the impact should be positive, which is to create and run great businesses that have a positive impact on the environment. London Fashion Week and the majority of the designers that show are emerging or smaller independent brands, many of which are supporting change and driving change.”

She said the activists and London designers have more in common than meets the eye. “Beautifully created fashion is not throwaway fashion and throwaway fashion is the problem. That is why I say there is an opportunity for the participants of London Fashion Week to join forces in the goals of Extinction Rebellion.”

Livia Firth, cofounder and creative director of Eco-Age, a consultancy that helps brands have more sustainable businesses, would agree with Lejeune.

“In the frenzy of the fashion weeks calendar, it is good to stop and think for a moment about what Extinction Rebellion is telling us — that fashion has a huge impact on the planet and how do we make sure that the shows are not a waste of resources or an opportunity to keep promoting our insatiable appetite for new looks,” she said.

“Extinction Rebellion is a campaign that we shouldn’t simply work around, but listen to, learn from and most importantly make significant changes. Fashion is what we wear every day and we have much more power here than on what governments wants to do with their political agenda.”

Diana Nieto, cofounder of Positive Luxury, which seeks to quantify the sustainability credentials of beauty, accessories and fashion brands and awards a butterfly mark to the greenest companies, is also fully behind the activists. She said it’s a free country and they have a right to speak their minds.

“The fact that they are being pushed away as if they don’t exist is not good for anyone,” she said, adding that offering the activists a place on the show week agenda would lessen the potential disruption. “At least they would feel that they are heard,” she said.