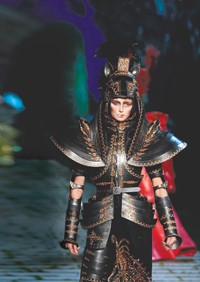 Christian Dior: Guess whose celebrity fashion moment has come? None other than the Devil himself. First the book, then the movie, and on Wednesday afternoon, John Galliano’s haute couture collection for Christian Dior. Galliano found inspiration in “Les Visiteurs du Soir,” a 1942 film fantasy based on a medieval legend in which, peeved by excessive goodness on Earth, Old Scratch sends along two traveling minstrels to a garden to mean things up a bit. Suffice to say the plan works like an evil-eye charm — at least on the runway. Which is not to say his models looked like Hell; only that, for all their ornate, indulgent accoutrements, they looked unpretty and woefully sad.

Perhaps after his real-clothes-for-the-American-masses resort show in New York, Galliano wanted to re-embrace the high theatricality and nerve-twisting escapades of which he is master. And just like back in the day, his program notes offered motley references — Joan of Arc, Hollywood, punk, Salvador Dali and, most puzzling, Botticelli, who seemed curiously MIA. But unlike in the designer’s early days, when every extravaganza brought a gorgeous visual feast, this time the effort felt pointlessly heavy-handed and angry.

Still, the collection was magnificent in its opulence. Couture has always been about overstatement, now more so than ever, when most clothing sales are of the color-me-practical pre-season ilk. Galliano pulled out all of the haute stops and then some, embroidering, bejeweling, hand-painting and feathering to stunning perfection. These flourishes decorated draped dresses that were almost lovely but for their fierce armor appendages, as well as ruched, bustled piles of runaway fabric masquerading as ballgowns, some bigger than a Smart Car. But no matter, since nothing presented will see the light of reality.

Among those taking it all in were Drew Barrymore, Liv Tyler, Mischa Barton and Mia Maestro. Then there was Cher, whose presence channeled Bob Mackie oh so pointedly. While Galliano owes a huge debt to the famed and maligned costumer, he might yet pick up a pointer or two about fashion showmanship. Number one, for example: Sometimes, it’s nice to make the wearer look attractive and the viewer smile.

Giorgio Armani Privé: Giorgio Armani floated into Paris on a cloud this season — a cloud of silk organdy, that is. His fleet of airy evening dresses made for an ethereal start to the couture season, and — minus Armani’s freakish dragonfly hats — these are just the kind of subtly crafted, unabashedly feminine dresses his clients, and potential fans, crave. Armani eased up on the constructed look, giving his dresses an ever-so-prettily undone feeling. While this breezy attitude felt fresh, his approach was classical. In periwinkle blue, a sculpted plissé bodice tumbled along into an ultrasoft ballgown. An organdy number in pale pink came whorled with bold rosettes. Others were sprinkled with crystals. And for the individualists among his fans, Armani sent out a swirly printed column under a filmy veil of lace.

As light as the eveningwear was, however, by day the collection was weighty and overwrought — unless the target market is a bombshell arriviste new to Russian riches. Armani’s Forties-era fascination inspired a slim silhouette with curvy jackets and wrapping tulip skirts. But too often the construction felt cumbersome, with stiff pleated lapels, spliced fabrics and high-standing collars. As for those behemoth collars, they are to the designer’s couture collections what wacky pants are to his ready-to-wear. Oh, for an Armani show without them.