Christian Dior: High art versus blatant commercialism. Refinement versus rage. Grand theater versus malaise. The leitmotifs that have so far marked John Galliano's reign at Dior have variously enthralled, outraged and confounded his audiences. But on... 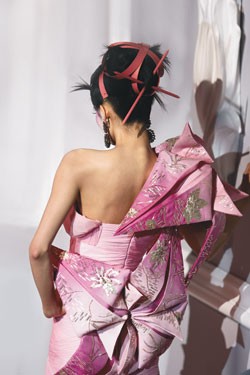 Christian Dior: High art versus blatant commercialism. Refinement versus rage. Grand theater versus malaise. The leitmotifs that have so far marked John Galliano’s reign at Dior have variously enthralled, outraged and confounded his audiences. But on Monday, Galliano, now entering his second decade with the house, presented what one hopes will make his couture manifesto for the future, a breathtaking East-meets-West spectacular that heralded an apparent rededication to boundless beauty of the most lavish sort.

And lavish it was. Unencumbered by anything as mundane as a budget and with an expansive, gifted atelier eager to realize his vision, Galliano brilliantly melded geisha exotica with New Look chic, topped off with touches of his renowned wit. A headdress of multiple dangling lanterns, anyone? How about three opened fans, perched just so? Despite such fancy, he kept the tone romantic but serious (at least until he took his bow done up like Lt. Pinkerton) in highly constructed clothes: ballgowns with intricate origami bodices; tight gowns swathed with abundant obi wraps; outsize kimonos over sleek columns. Along the way, he ruched, pleated, tucked, swirled and tiered while favoring luxe fabrics often hand-painted into gorgeous dégradées. And he made it all glitter with Louvre-worthy embroideries — exquisite renderings of cherry blossoms, dragonflies and overgrown butterflies.

Yet, for all the cross-cultural posturing, the real theme of this show was to put couture back on its high-fashion pedestal. Galliano catered neither to clients nor to inner demons nor even to the dullest common denominator, red-carpet crowd. (Oscar gals, he’ll FedEx some sketches.) At most, he offered three looks that could be worn as shown, and then only by the most adventurous fashion lovers to the most insider events. Certainly, no Cameron or Cate could dare face a worldwide television audience done up in one of these numbers unless she wanted to be frock-mocked the morning after.

Yes, fashion should be, and is, egalitarian, but not all fashion and not all the time. In subjugating itself so whorishly to Hollywood, fashion has clipped its own wings. Here, Galliano spread his wings wide once more, taking an essential flight back to the old “laboratory days,” when ideas would “trickle down” — or even up — to the buying and borrowing consumer. And what a trip it was.