Fabric of the Community

A wardrobe staple during and after WWII, Harris Tweed faces challenges as it goes upscale and gets an update. 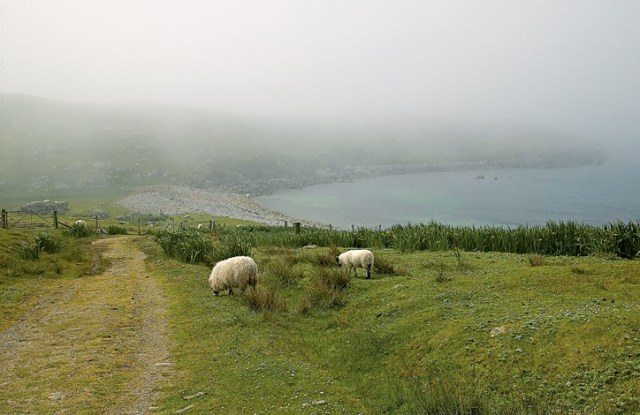 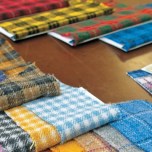 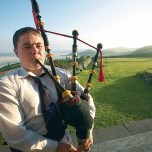 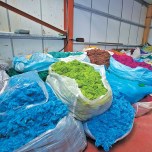 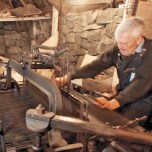 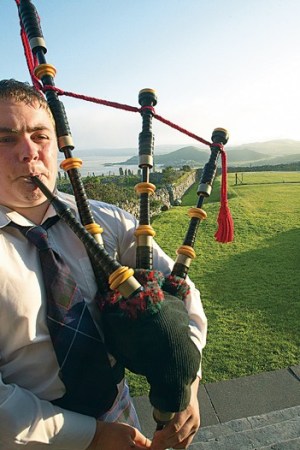 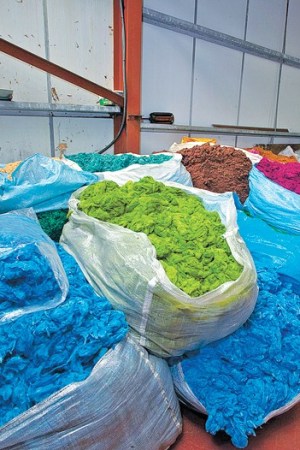 LEWIS & HARRIS, Scotland – “Not too fast, not too slow.” Wedged between golf clubs, garden equipment and boxes bursting with household paraphernalia, Neil Macleod sits in his garage, weaving dreams into Harris Tweed. “It’s tremendously satisfying; I clear my mind and imagine all the places where this piece of Harris Tweed will wind up,” says Macleod, pedaling at his loom, before pausing to pat his sheepdog, who sits obediently in her basket at his feet. “And it only can be made here on this small island on the edge of the world.”

Known as the world’s only commercially produced handwoven tweed, Harris Tweed has been used by Ralph Lauren and Prada, and inspired Coco Chanel’s famous jackets. But the pure virgin wool fabric all but fell into obscurity two years ago as production plummeted to one manufacturer. It’s only now, with the a revival of another mill and the fabric once again coming into fashion—inspiring work of Tom Ford and Thom Browne—that Harris Tweed is embarking on a renaissance. And the fascination lies in the history of the fabric. Just a few hours’ ferry ride off the western shore of the Scottish Highlands, islanders like Macleod on jointly connected isles of Lewis and Harris—part of the Outer Hebrides—have been weaving Harris Tweed for as long as anyone can remember.

The heavy fabric is protected by an act of Parliament, which states that Harris Tweed must be “handwoven by the islanders at their homes in the Outer Hebrides” and “made from pure virgin wool, which is also dyed and spun” there. Only after it has been inspected by the industry authority and awarded the symbol of authenticity—the orb with the Maltese cross, one of Britain’s oldest trademarks, since 1909—does the cloth earn the venerable moniker Harris Tweed.

“It just takes a quick glance at the nature here to see where the fabric’s inspiration comes from,” says Macleod, showing off lengths of tweed speckled with a kaleidoscope of Hebridean colors. “There is no other place on earth like it. You just fall in love with the landscape.”

And who wouldn’t? Rolling moors dotted with white sheep and blanketed by violet heather, peaty streams teaming with pink salmon and bleeding into electric blue seas, endless stretches of sandy, lemon-colored beaches. Macleod is one of only 100 active weavers left on the island, from as many as 1,000 around a decade ago, producing a mere 300,000 meters of the famed fabric per annum, compared with more than a million meters of cloth back in its postwar heyday.

Harris Tweed all but ceased existing several years ago when the biggest mill on the island was put up for sale. A handful of entrepreneurs from the mainland stepped in to try to rescue the industry, albeit with different visions of how. In 2006, Yorkshire native Brian Haggas purchased the Kenneth Mackenzie mill in Stornoway, which at one time accounted for 95 percent of all Harris Tweed production.

“[Harris Tweed] was and can still be an iconic brand,” says Haggas from his offices. “We’ve got a great product where there’s real nostalgia and fondness, where people’s eyes light up when you mention the name.” Believing that Harris Tweed “isn’t a fashion staple” but “a classic,” Haggas, who made his fortune in textiles, reduced the mill’s 800 patterns of Harris Tweed to just four styles and cut wholesale distribution of the fabric, choosing instead to ship the cloth to China.

There it is made into jackets for sale at retail. He took delivery of the first shipment of 70,000 jackets in September. Concerned that Harris Tweed would no longer be available by the bale, three Scots invested in two other mills, bent on maintaining supplies to the wholesale trade and preserving the gamut of cloth designs, which they and many others on the island believe are part of the local heritage. Scottish oil trader Ian Taylor rescued the Harris Tweed Hebrides mill in the village of Shawbost on Lewis isle in 2007. It had been closed for nearly two years. The mill, which once supplied Prada, Louis Vuitton and Ralph Lauren, restarted production in May.

“We had to act quickly and catch the tail end of the season in order to tell customers that Harris Tweed is not lost forever,” explains Ian Mackenzie, the mill’s chief executive officer, as he strolls through the plant, where stacks of raw wool await dyeing beside murky vats of liquid. “It was the lifeline for the island for 100 years. Society here was built on the back of Harris Tweed. It is a social service, the fabric of the community,” Mackenzie says. “From the land comes the cloth.”

“Harris Tweed is its own brand,” he continues, with a quick stop to show off a mélange of chopped up wool in various colors, which in seconds will be spun into yarn and shipped to the weavers, for threading into a specific pattern. “We will push it to its greatest potential back where it should be in the high-end market,” he adds, showing off the final process where rolls of fabric are washed and finished before being stamped.

A short drive from Shawbost, along the rugged coastline and through the misty moors that make up Lewis, the owners of the smallest mill on the island also have big plans for Harris Tweed. “What we have is a completely unique product,” says Derek Reid, who bought Harris Tweed Textiles in 2003, along with a shell of a mill. “It is handwoven. It has phenomenal colors. It has a heritage and culture that are quite simply unique and an act of Parliament protects it. So, you’ve got something that is iconic, desirable and capable of being fashion-related, but which needs leadership and direction.” Reid, a former marketing director from Cadbury Schweppes, maintains that the challenge is pricing Harris Tweed accordingly and making it appealing to the end consumer in a modern world with many choices like ultra-light, softer tweeds made from blends. The weight of a Harris Tweed, which is one of the pillars of the parliamentary act, cannot be altered.

“We can’t compete with regulations, but I think the solution is creatively thinking outside the box using your own brainpower to decide how to skin the cat,” says Reid.

For Harris Tweed Textiles that means producing cashmere blends alongside Harris Tweed, but not under the Harris Tweed banner, to increase sales and keep the mill running 12 months of the year. “There is a massive hill to climb now,” says Reid. “At it is a hill that requires unanimity of objectives between all the mills, all the weavers and the entirety of the industry. We have to see production reach 750,000 meters over the next three to five years. It’s going to have to go through a pain barrier where prices go up [but where ultimately] everyone benefits financially. The days of selling a Harris Tweed jacket at only 120 pounds are hopefully long gone.”

The challenge is not lost on the Harris Tweed Authority. “The demands of protecting the orb thus far have stifled the ability to promote it and we’ll have nothing left to protect if we don’t promote,” says Lorna MacAulay, the newly appointed president of the Authority. “We need to find the balance between protection and promotion and bring it back to fashion.” From her office, which is fully dressed—or upholstered—in Harris Tweed, MacAulay is wrestling with the task of bringing Harris Tweed into the 21st century. “We need to be proud about bringing it back and start showing off,” MacAulay says.

She may have a captive audience, if she shouts loud enough. Fusty images of Harris Tweed à la fuddy-duddy sport coats and Miss Marple-esque sensible suits are currently gathering mothballs as designers and industry insiders are increasingly lured by the fabric’s wide-ranging appeal.

“Harris Tweed is the DNA of modern men’s wear. It is the foundation of men’s fashion and great taste in men’s apparel. It’s bigger than the isles themselves and every great name in retail has been inspired by the beauty of Harris Tweed,” says New York–based men’s wear designer Joseph Abboud, who recalled a photograph of Coco Chanel donning a borrowed men’s Harris Tweed jacket. “In this world of mass production and automation there is a boomerang effect towards luxury handmade products,” says Abboud.

In 1987, Vivienne Westwood themed her women’s collection around the cloth and Alexander McQueen made his “Grey Lady” ball gown from a hand patchwork jigsaw of different Harris Tweeds. Dolce & Gabbana tapped the fabric, as did Alexandre Plokhov, Versace’s men’s wear designer, who opened his Cloak show with a gray cape made from vegetable-dyed Harris Tweed in 2005. “For sure tweed as a fabrication has a look and tells a story,” says Tom Kalenderian, executive vice-president and GMM of men’s at Barneys. “Harris Tweed’s artisan factor is a key element,” says Tommy Fazio, fashion director at Bergdorf Goodman Men. “Even people like Tom Ford are making suits inspired by Harris Tweed.”

After an inspiring outing at Première Vision in September, Fazio says he expects to see a “real resurgence” of the fabric next fall. Macleod is preparing for it. Still in his garage, he is about to finish off his five-day week of weaving eight hours a day. Nearly 170 meters of Harris Tweed are rolled up and waiting to be sent back to the mills.

“We want to see the industry grow. We must aim for that. We’re not traditionalists,” he says. “I would love to see Harris Tweed that I wove here worn by some elegantly dressed man making his way down the high-class streets of New York or Paris.”