Fantasy girls from Rapunzel to Russian dolls, sharply tailored looks and Seventies glitter lit up London's runways as the shows drew to a close. But watch out! Fashion here is moving in the direction of the macabre. 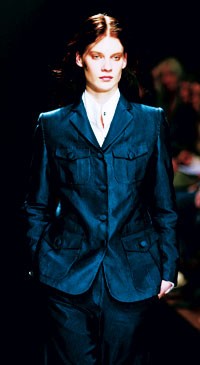 Fantasy girls from Rapunzel to Russian dolls, sharply tailored looks and Seventies glitter lit up London’s runways as the shows drew to a close. But watch out! Fashion here is moving in the direction of the macabre.

Giles Deacon: “The collection doesn’t really have a theme. I just wanted to explore old-school, traditional couture and tailoring techniques and play with proportions,” said Deacon a few days before his spare, elegant show on Wednesday night. And he was true to his word. After seasons of overstyling his sharply cut, dramatic pieces on the runway, Deacon got to straight to the point, sending out a collection that oozed sophistication from every seam. Black velvet chain-link patterns wound their way around sharply tailored, nip-waisted jackets, while pencil skirts and trapeze jackets were cut from ponyskin.

But the collection, worn on the catwalk by the likes of Eva Herzigova and Karen Elson, wasn’t all sharp angles. Some of the structured wool jackets had puffed, twisted velvet sleeves. Voluminous black velvet capes and French highwayman’s coats with velvet pouf sleeves were dramatic but unfussy. Deacon, whose clients include Bergdorf Goodman, Selfridges and Harvey Nichols, also unveiled evening gowns, including curve-hugging black knits, flowing jersey dresses with cutouts and strapless crepe ball gowns cinched at the waist with velvet bows.

Aquascutum: The British brand that built a name on rain-repellent wool coats back in the days of Queen Victoria just got a hit of youth serum. Founded in 1851 by John Emary and now owned by the Japanese company Renown, the brand is best known for its Aquascutum London collection of well-tailored suits, dresses and trenches in fabulous fabrics. Now designers Michael Herz and Graeme Fidler are turning the fashion volume up a notch with a line called simply Aquascutum — a collection inspired by British men’s tailoring and London street style. The debut runway show was a mixture of structure and drape with sexy, fitted tailored jackets and pants or pencil skirts worn with corsets, unlined, washed silk trenches and Fifties-style prom dresses with tulle petticoats that can be worn on the inside or the outside of the skirts. “We want to raise the profile of the brand and carry the business forward for another 150 years,” said Fidler. Herz added, “In a few seasons’ time, we’d like to see this on the catwalk with bits of the main line mixed in.” The women’s wear currently sells at Harrods and at the London flagship at 100 Regent Street and, inspired by the success of another venerable rainwear company, the firm is hoping to broaden its wholesale base with the new collection.

Clements Ribeiro: Life’s a rose garden for design duo Suzanne Clements and Inacio Ribeiro, who sent out pieces with flower motifs that were bigger and bolder than ever this season. Big appliquéd red roses flourished, embroidered onto black flamenco-style dresses, wool sweaters and sheer chiffon tops, while sprigs of black sequins sprouted on toggle-front red sweaters. Colorful bouquet prints bloomed over black blouson sweaters, smart tailored coats and the label’s signature tea dresses. “Our inspirations were Frieda Kahlo and Nov. 2, the Day of the Dead,” Ribeiro said after the show, which also featured coats, shorts and skirts in heavy wool fabrics such as flannel. The flapper dresses, however, looked flimsy and insubstantial up close.

Eley Kishimoto: Gone are the whimsical jungle motifs, the primary colors, the batik fabrics and, in their place, something far more sinister has crept in. The design duo of Mark Eley and Wakako Kishimoto covered their Empire-waist dresses and liquid silk skirts with prints of disembodied teardrops and locks of Rapunzel-like blonde curls, tangled branches and bunches of flowers from a creepy enchanted forest. “We were thinking of fables, a princess who leaves her castle and climbs down a cobbled hill into an enchanted forest,” said Eley. Before the princess takes the plunge, however, she wears clothes that are rich and sophisticated — fit for any house with a drawbridge and a few turrets. There were gold brocade dresses with velvet bows at the waist, belted plaid coats, and sweet, low-waisted velvet and flower-print silk dresses.

Camilla Staerk: Her muse was Ariane from the 1976 French film “La Maîtresse,” the story of a prostitute who works at grand estates by day — and inhabits an S&M dungeon by night. So it’s no wonder that Danish designer Camilla Staerk mixed hard leather looks and soft shapes in her fall collection. For day, there were prim, pretty dresses, pencil-skirted numbers in shades of berry and black lace and floaty black-and-white tea dresses. Evening, however, was much more fun. Staerk showed off her leather-cutting skills — and love of rocker Siouxie Sioux — with black puffball skirts, sharp bustier dresses, tapered pants, cropped dinner jackets and ultra-high-waisted, ruched pencil skirts. Her woolens showed just as much expertise: Cropped sweaters were detailed with her motif of the moment, a leaping black panther.

FrostFrench: Cocktails in a church? Leave it to FrostFrench, where the spectacle often takes place off — rather than on — the runway. This time around, however, Sadie Frost and Jemima French showed one of their best clothing collections since they set up their business in 1999. The venue was St. Mary Magdalene Church in West London, the theme was Russian-peasant chic, but the collection was actually fit for a tsarina. The designers showed sheer, lustrous, puff-shouldered blouses that came in gold, purple and electric blue, Fair Isle sweaters and plenty of chunky knits. The long, fitted evening dresses came in jade silk brocade or crushed, rose-colored velvet, and they were worn under sequined bolero-jackets trimmed with fake fur. The presentation took place against the backdrop of a winter-wonderland of fake snow, Christmas lights, and the strains of Kate Bush’s Eighties song “Babushka.”

Ghost: The spirit of Stevie Nicks in her Fleetwood Mac “Rumours” days hovered over the collection that Tanya Sarne turned out for fall. There were velvet brocade jackets and coats in shades of claret, navy and black, peasant dresses galore — some dotted with diamanté sparkles — and lean, liquid trouser suits fashioned from Sarne’s signature viscose or velvet. When Nicks’ spirit departed, flapper girls came roaring in instead, wearing olive-toned, low-waisted dresses, some of them over knits. “It was Twenties, Forties, Seventies — Morocco in the Seventies —mixed all together, and I hope I came out with something very modern,” Sarne said.

Jessica Ogden: The designer who has built her business on sweet sailor dresses, flapper-inspired silhouettes and comfortable homegrown knits took a trip to the South of France for fall. But the land that fired the imaginations of Gauguin and van Gogh didn’t exactly bring out the best in Ogden. Her painter’s smock jackets paired with voluminous circle skirts made her models look like Christmas trees, while the patchwork pants with elasticized hems were equally unflattering. Some delicate, printed cotton dresses, however, peeked from between all the patchwork, quilted shawls and flowing handkerchief blouses on the runway — and hopefully there are more of those frocks back in the showroom.