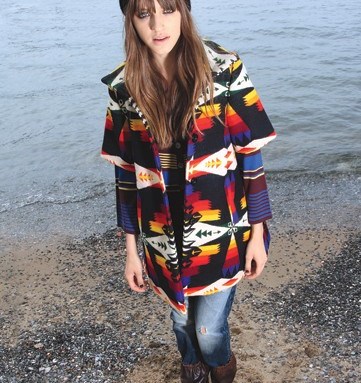 Mention a tent, and fashion types will assume you’re referring to a crowded show venue, not the more prosaic camping variety. But this fall, some designers showed looks that wouldn’t be out of place on a hunting-and-fishing jaunt. Sure, Marc Jacobs evoked the Mudd Club for his main collection, but his secondary line was more Elks Lodge, with models in work boots, mechanic-style jumpsuits and buffalo plaid. And the over-the-knee waders Miuccia Prada showed in industrial green wouldn’t have been out of place in Montana (though few true outdoorswomen would have paired them, as she did, with floral velvet frocks).

The gentlewoman farmer look that has gathered steam over the past few seasons possesses a perverse appeal for the fashion set, with the chic affecting lumberjack shirts, hunting vests, work boots, earflap hats and jeans designed to look like they were run over several times with a tractor. Hunter even makes a pre-mud-spattered version of its popular wellies, for those whose commute takes place on the 6 train rather than a wagon train (the company also recently teamed up with Jimmy Choo on a pair of boots). Brit style icon Alexa Chung has been spotted wearing a Barbour barn jacket, accessorized with heels and a Miu Miu tote. “It’s not something that’s just trendy,” says downtown retailer Steven Alan, summing up the rustic look’s appeal. “It’s a little bit ironic.”

In other words, if there were ever a moment when a PYT could credibly outfit herself entirely from a sporting goods store and past muster in fashion circles, this is it. “It’s almost like macaroni and cheese. It’s like comfort food, for clothing,” muses Alan, who carries several outdoor brands in his store in addition to his woodsy namesake line, including boots from Spain that are designed to be worn when cleaning stables. Recently, he took an inspiration trip to Portland, Maine, where he visited fishing supply stores and L.L. Bean.

Benjamin Talley Smith, a native Vermonter and the design director of Earnest Sewn, sees the style as a reaction to the overdressing of previous years: “People want to be casual, wearing something that’s been worn-in and beat-up,” he claims. Jen Mankins, the owner of the Brooklyn boutique Bird, carries chambray work shirts and painter’s pants from Chimala and Woolrich Woolen Mills’ traditional hunting and fishing items. She says there’s a stealth fashion appeal to the look. “It doesn’t scream, ‘Look at me!’” the way, say, a logo-strewn ensemble would.

Humberto Leon, co-owner of Opening Ceremony, calls these heritage labels “the real deal.” Starting in eighth grade, he combed local thrift stores for Pendleton flannel work shirts. When he opened his store, he even sold some of their pieces — however, the generous, lumberjack-friendly cuts didn’t always jibe with hipster frames. So the 100-year-old sporting good company and the bleeding-edge boutique partnered for fall, with a capsule collection of Opening Ceremony designs rendered in Pendleton fabrics (including its Navajo blanket pattern). For urbanites, the appeal comes from “that idea of going to upstate New York or Montauk, to the countryside,” Leon says, “and buying this type of clothing allows you to reminisce about this while you’re living in the city.” Leon also sells more high-end items in the rustic vein, such as Boy by Band of Outsiders overalls and chic rock-climbing pants, complete with carabiners, through the store’s house label.

“The word ‘sober’ comes up a lot with my clothes,” says Matthew Terry, who debuted his Coventry line for fall during New York Fashion Week. Taking hunting wear as a starting point, his lineup includes a jacket with a so-called “kill pocket” (originally intended for freshly slaughtered carcasses) on the back. “We took away the hunting aspect of the clothes and made them more luxurious and more urbane,” says Terry. When asked about the city dweller’s use for a kill pocket, he kiddingly suggests it doubles as a hand warmer for someone riding behind you on a Vespa.

Worked to the extreme, this kind of rural dressing for urban life might easily resemble those car commercials wherein an SUV careens over mountain passes and across a rocky river. Yes, great, this car-jacket-pair of boots can survive mud splashes, high altitudes and bear attacks. But who really needs all of that in the West Village? “It can be taken too far, and sometimes people can overdo the vintage [aspect],” says Smith.

“You can try too hard to look effortless,” concurs Rag & Bone’s Marcus Wainwright. (He should know — he lives in Williamsburg.)

That said, fashion is no stranger to playacting. A woman can wear a military-inspired Balmain jacket without having to enlist, and safari clothes pass muster outside the savanna. If the silhouette is kept sophisticated, a woman can wear these pieces “without looking like she’s going to go work in the fields,” as Matteo Gottardi of Operations puts it.

And while the log-cabin-chic pose can come across as inauthentic, these clothes have an undeniable appeal. Maybe it’s because these days, the new rock stars are people who work with their hands (especially for people whose only calluses come from correcting the auto-spell function on their iPhones.) It’s cooler to be an indie cheesemaker in upstate New York than a banker in TriBeCa — and even if you are the latter, you can dress like the former on the weekends. Hey, even Karl Lagerfeld goes to Vermont to relax.