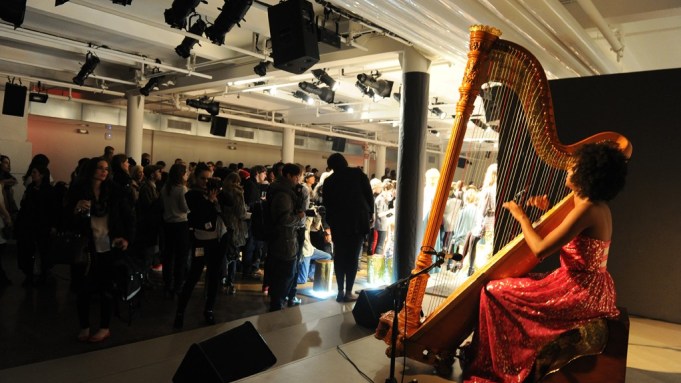 Live performances always make the runway memorable but for the fall 2012 shows, most designers kept the focus on their collections, playing soundtracks that were meant to complement, not clash.

In New York, Betsey Johnson had a fun mix of mash-ups and remixes. A few that stood out were Dr. Dre’s remix of “Miss You” by The Rolling Stones, Dusty Springfield’s “Son of a Preacher Man” mixed with 50 Cent’s “If I Can’t” (a cappella), “Weapon of Choice” by Fatboy Slim mixed with “I Am the Walrus” (a cappella) by The Beatles and LCD Soundsystem and The Beatles “Get Back” mash-up. Michael Kors, Marc Jacobs and Richard Chai had similar ideas, playing different versions of the same song. Kors followed “Every Teardrop Is a Waterfall” by Coldplay with versions by Vitamin String Quartet and Robyn. Jacobs chose the song “Who Will Buy?” from the musical Oliver, playing versions by composer Max Roach, the Mormon Tabernacle Choir and an instrumental piece. And Chai had “How Soon Is Now?” by The Smiths, followed with a cover by Mike Viola. At Ralph Lauren, film soundtracks set the mood, featuring “Did I Make the Most of Loving You” by Mary-Jess from the PBS television series Downton Abbey and “I Will Follow You” and “Dance For Me Wallis” by Abel Korzeniowski from Madonna’s directorial debut W.E. At Rag & Bone, Thom Yorke once again produced a track, “Bonefire Version 7,” especially for the show.

London Fashion Week bubbled over with a variety of music styles, from the sounds of Italian composer Ennio Morricone at Mario Schwab to contemporary British band Marina and the Diamonds at Temperley and Burberry. For some labels, the designs had a direct impact on the music. Christopher Raeburn’s sound designers, Toot, put together a composition that mirrored the collection using the sounds of garments, arctic winds and crackling sugar crystals, called “Freeze.” The most played band at the shows was up-and-coming British psychedelic quartet Django Django, heard at Aquascutum, Temperley and Clements Ribeiro.

The music at Paris shows was at times too loud (Viktor & Rolf, Giambattista Valli) or mind-numbingly repetitive (Dries Van Noten, Rochas). At its best, runway soundtracks cast melancholic or ethereal moods, underscoring the dark romance of the season. There were epic tracks like “The Photographer” by Philip Glass at Louis Vuitton or spooky songs like “Black Candles” by Umberto at Alexander McQueen. Two live performances stood out: Issey Miyake had Open Reel Ensemble mix live sounds like the steam of an iron into an electronic composition, and Jean-Charles de Castelbajac opened with a performance by French music video director and indie musician Yoann Lemoine, who goes by the stage name Woodkid.

“This Is Love” by PJ Harvey (Paul Smith)

“Before the Light Takes Us” by Darkness Falls (Isabel Marant)

“I Fink U Freeky” by Die Antwoord (Stella McCartney)