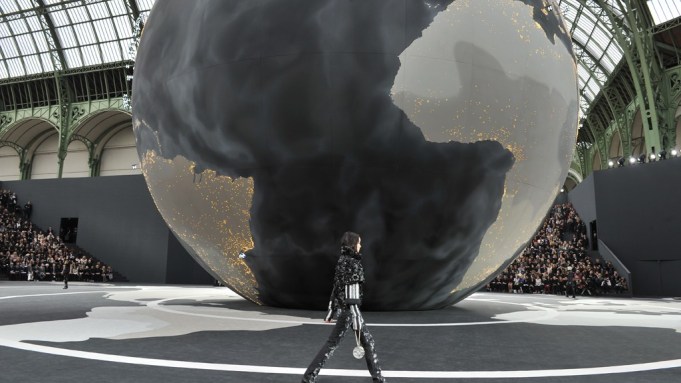 A beaming yellow sun, a giant planet earth, inflatable mirrored spheres, a sunflower or two and a blizzard. Here, a few of the more memorable sets of the season.

• CHANEL
A giant world globe was the centerpiece with flags pinned in spots where Chanel has a presence—all to the recurring sound of Daft Punk’s “Around the World.” The set was created by Chanel’s in-house team, which was led by Karl Lagerfeld’s vision. “The spirit of the show was Chanel’s globalization,” Lagerfeld explains. “Chanel opened its first boutique exactly 100 years ago in Deauville, and now there are 300 Chanel stores in the world, so it is a tribute to the world and to the global Chanel.”

• PRADA
Created by AMO, the research arm of Rem Koolhaas’ Rotterdam-based OMA, Prada’s “Reclaimed Space” set featured projections of images around the space’s perimeter, from idyllic visuals to abstract panoramas and shadows of a contemplative woman, with seating in the center. “The audience faced an ‘Ideal House’: a continuous interior populated with geometric furniture, objects and manifestation of everyday life,” notes OMA associate and Prada project leader Ippolito Pestellini Laparelli. “Models weaved through the set, acting as characters in a sequence of sophisticated domestic scenes.” The effect was full of theater and emotion—“The show was ultimately more similar to a play than a traditional catwalk,” she notes.

• MARC JACOBS
A huge hot sun inspired by Olafur Eliasson’s “The Weather Project” at the Tate intensely shone on the models who walked a circular runway. “Marc was feeling a certain melancholy and wanted the show to have a somber quality,” New York-based set designer Stefan Beckman says. The warm light washed out the looks with an amber, almost gray tone, and the models did an encore with normal lights, exposing the intricate embellishments. “Almost like The Wizard of Oz,” notes Beckman. “He loved that idea of everything being in black-and-white, and all of a sudden your perception was in color.”

• LOUIS VUITTON
Marc Jacobs thought up the concept of a corridor of an imaginary hotel. The space was lined in doors that models emerged from with the audience sitting in the center peeking into the rooms like voyeurs. “There is a mystery about what goes on behind the doors,” Jacobs says. “I spend a lot of time in hotels and it’s intriguing to think about your life and what other people think about you—as well as other people’s lives and what people think of them in turn. The hotel corridor provides a really good backdrop for many different characters.”

• MONCLER GAMME ROUGE
An iceberg, a fake blizzard and mountain climbers landing on the snowdrift runway via a zip line made up this set by Paris’ La Mode en Image. According to the company, the aim of the set “was to go deep into the brand’s soul, where the cold is absolute and extreme: The encounter with nature, the challenge of sport and putting resistance to the test.”

• CHRISTIAN DIOR
Raf Simons and the Dior team homed in on ideas of Surrealism and Pop with countless enormous mirrored spheres reflecting the floor painted sky blue with fluffy white clouds—a clear nod to the work of Belgian surrealist artist René Magritte—best known, perhaps, for his Ceçi n’est pas une pipe (“This is not a pipe”) series. “I wanted a set that would marry dream and reality,” Simons said. “The surreal Magritte-like cloud path expresses the feeling one could have floating above the sky, while the reflection in the silver mirrored surfaces confront you to reality and to yourself. It also refers to the dual vision of Christian Dior, marrying a defined architectural silhouette with a more airy, almost ethereal aesthetic.”

• VIKTOR & ROLF
A backdrop visual of wilting sunflowers in black and white and a damaged wooden floor was conceived by Antwerp’s Job Smeets and Nynke Tynagel of Studio Job. According to the designers, “The show was about raw glamour and the girl was a sophisticated rebel. Ripped-jean effects were translated to embroidered tuxedo looks. We wanted to visually complement the collection with the set print.”